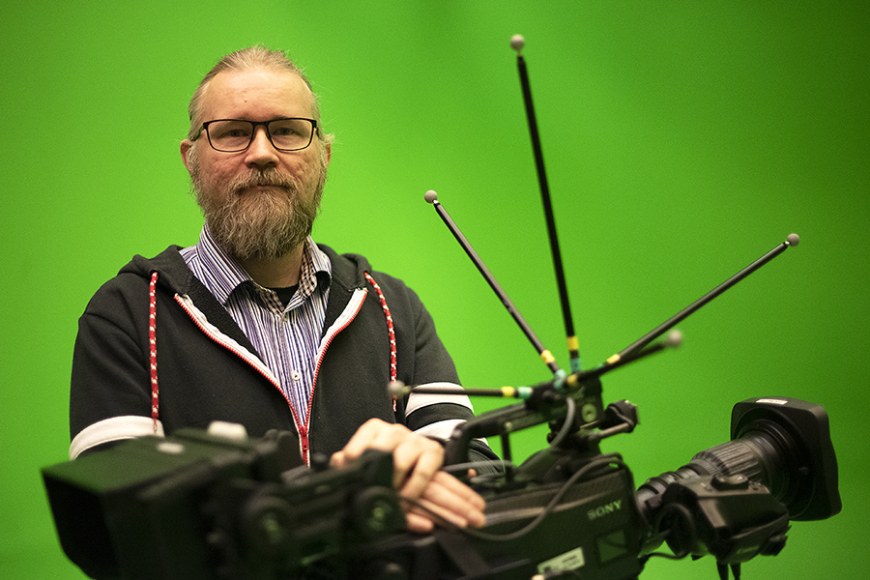 Mikko Karsisto and his business partners aroused interest at Mediapolis and Yle in 2014. Karsisto made animations in his game enterprise and worked on a motion capture system. Motion capture stands for technology used for recording a physical object’s movements into a digital form. The data is analysed and used in moving a digital object or character. The original object is usually an actor.

The cooperation interested all parties and Keho Interactive started at Yle facilities in Mediapolis in 2016. Karsisto became its managing director. At first the business focused on motion capture but they soon had the idea of developing virtual studios to open systems. The virtual studio became Keho Interactive’s main product with the support of Yle.

Augmented reality systems used to be closed and rigid and require special solutions. Keho Interactive wanted to develop an open system based on an easily accessible technology. The virtual studio is based on an open game engine called Unreal Engine, which is widely used in games as well as in diverse simulations and animations.

Effects have traditionally been produced with green screen technology. It means that the green studio background is replaced with the wanted material during postproduction. For example, exotic landscapes and challenging environments of films are usually made with this technology. The virtual studio is based on the same idea but its implementation is more advanced: movements and optics are modelled into a virtual world, which has the same perspective as the real world. Only the studio table and hosts exist physically.

The solution is unique throughout the world. In practice, hosts are in a green-walled studio and Yle shoots and directs the broadcast. Keho Interactive adds the virtual graphics and other elements to the broadcast. The virtual studio offers the same camera possibilities as a traditional studio. Cameras are movable and multicamera production is possible.

“We have for example made a research-oriented live role play called Lintukoto and an opera with the Music Academy. In it the actor’s movements were transferred into a virtual unicorn’s movements,” Karsisto explains.

Originally the cooperation started from TAMK’s need to educate students on the secrets of motion capture and Keho Interactive tailored a suitable education for TAMK. Nowadays education has extended to the virtual studio. Students become top professionals in modern animation and TV graphics. The cooperation is easy: some founder members of the enterprise are TAMK alumni and it is straightforward to recruit students into projects in the joint facilities.

“All starts with people. Most projects have originated in daily corridor discussions,” Karsisto laughs.

The enterprise has an ongoing project with TAMK but Karsisto does not tell much about it. TAMK’s media teacher and students participate in it and it is something big. The project is related to a new way of making a TV programme.

The diversity of working with TAMK is also rewarding for the enterprise. The starting point of projects does not need to be commercial profitability but projects may also be very experimental. The learning process is valuable even if the idea is unusual or weird – it makes learning even more effective than routine work.

New TV graphics as the objective

Keho Interactive is full of new ideas. Some of them are being implemented and others are waiting for a suitable moment. The possibilities are extensive as physically impossible props and situations can be created virtually. The main objective is to develop television graphics and extend its use significantly. The aim is that viewers can impact and their experience does not need to limit to the television screen. The future of TV graphics is in entertainment and interactivity.

“This is what we do: we develop new technology and turn traditional conceptions upside down,” Karsisto laughs.

The strength of the new technology is visible in business. The next step is controlled growth and internationalisation. The most probable growth direction is e-sport as the latest solutions and technologies are typically seen there. In addition, its number of viewers is huge and consumption deviates from the traditional one. There is a lot to achieve in the world of e-sport.

“E-sport offers enormous possibilities all of which we don’t yet even understand,” Karsisto states.

The growth and new possibilities will lead to need for competent labour and closer cooperation with TAMK. Keho Interactive thanks TAMK for its versatility and investment in joint projects.

“Collaboration with TAMK has gone well and we have been very satisfied. I hope the cooperation will bear fruit and TAMK students will offer us competent labour in future,” Karsisto hopes.