Research cooperation results in a donation to TAU 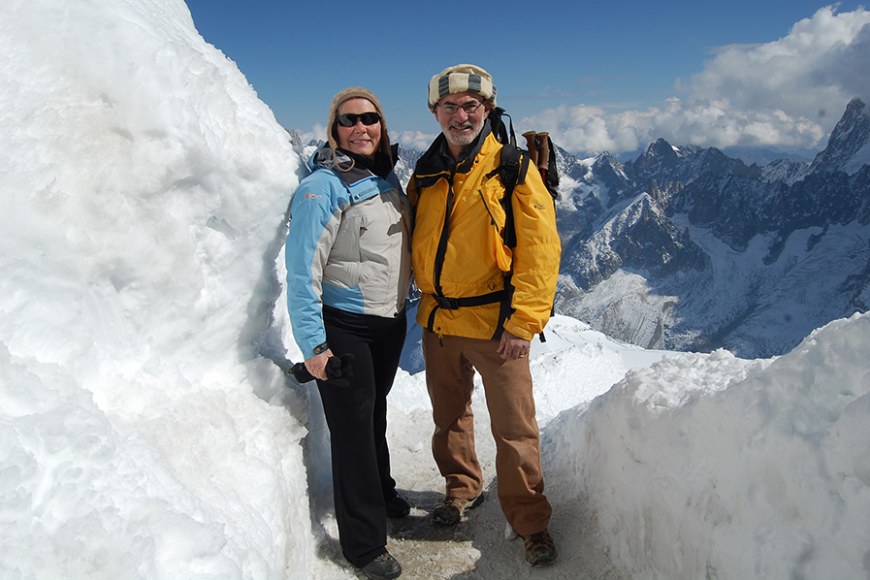 Jon Simon and Kirsten Russell in Aiguille du Midi in the French Alps.
Jonathon Simon, an American public health scientist, and his wife Kirsten Russell are among the first international donors of Tampere University. The donation is based on Simon’s research cooperation with Professor Per Ashorn.

Simon and Ashorn, who is a professor of paediatrics at Tampere University, met while they both worked at the Department of Maternal, Newborn, Child and Adolescent Health at the World Health Organization (WHO) in Geneva from 2016 to 2018.

Simon, a research scientist focusing on diarrhoeal diseases and overall child health, has worked at WHO for five years. He manages scientific studies, develops technical guidelines and belongs to a group that works to expand the concept of child health to include social and cognitive health and the well-being needs of healthy children.

These colleagues have in common their work to improve the preconditions for child health, and research conducted in Africa.

Simon has directed the Center for Global Health & Development at Boston University and been Director of the Health Office at Harvard Institute for International Development. For nearly 30 years, Simon has been involved in applied child health research activities, working in more than 20 developing countries in Africa and South Asia.

For decades, Ashorn and his wife Senior Research Fellow Ulla Ashorn have worked to minimise child mortality and to improve the health of children and mothers in Malawi, one of the poorest countries in the world. Ashorn’s latest project takes place in Mali. He was one of the founders of the Global Health and Development Programme at Tampere University.

“Working with Jon was fun, educational and efficient. We came to WHO with the same type of academic background, but he was an American, I was a European, he was a public health scientist with on interest on populations while I was a physician concentrating on the perspective of individuals,” Ashorn says.

“Our cooperation run very smoothly because we were both willing to listen to and help each other in both our daily tasks and planning for the longer term. Perhaps the fact that neither of us planned to make a “career” at the WHO – that is, we did not compete for possible promotion opportunities with each other – contributed to the positive atmosphere,” Ashorn explains.

Simon agrees. “Working with Professor Ashorn was an absolute delight.  He is one of the smartest researchers I have had the privilege to work with,” he says and describes his colleague as an exceptional scientist.

In Geneva, Simon and Ashorn participated in a soon to be published study that investigated improved zinc dosing for the management of diarrhoea. They will also publish a co-authored paper on the potential use of azithromycin in the management of severe diarrhoea.

“As a faculty member at both Harvard University and Boston University, I helped the universities in private fund-raising,” Simon says.

“One of the things I would suggest to donors is that one way to show your appreciation of others or to give recognition to a particular event is to donate to the university in the name of the person you wish to honour,” Simon explains.

The donation of Simon and Russell is accompanied by a mention that the donation is based on the research collaboration with Per Ashorn.

“My gift to Tampere University was simply one small way to say thanks to Per for being an exceptional colleague and thanks to the university for “loaning” him to us for those two years,” Simon notes.

The long motorcycle trip Simon had planned to Finland through Eastern Europe this summer was cancelled because of the coronavirus. However, if the COVID-19 situation continues to improve, he is planning a long summer weekend in Finland.

Get to know Tampere University’s donors