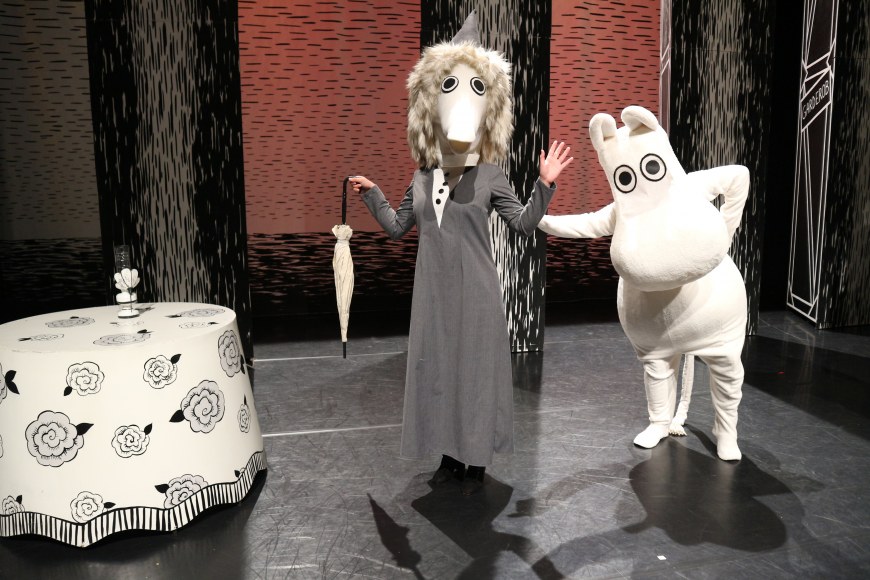 Student Johannes Rannankari from Tampere University of Applied Sciences is preparing for the role of Moomintroll. Rannankari acts the playful Moomintroll with a smile on his face. The smile has to be expressed in gestures. Everything done inside the costume is conveyed to the audience.

The Moomin opera is practised at Pyynikki Hall in Tampere. The props find their place on the stage. The Moomin characters work on their roles with the director, director’s assistant and conductor.

“I don’t play Moomintroll but I think what Moomins are like and reflect it on my life to identify with the Moomins. My purpose is not to be the Moomintroll as known from the TV but to find my internal moomin,” Rannankari thinks.

The Moomin opera, which has its premiere on 13 September, is a multilayered opera including both oratorio, operetta and electronic dance music. The opera conducted by Ilkka Kuusisto is based on Tove Jansson’s book Dangerous Midsummer (1974). The Moomin opera offers the possibility to identify with the world of opera and Moomins for people of all ages. Rannankari’s role in the unique opera requires diverse skills.

“I must convey my feelings in the Moomintroll costume. Moomintroll is a character who thinks a lot about everything and I find many such characteristics in myself. I have to remember to live my role all the time. There’s a lot what I have to know as Moomintroll is on the stage a lot and the role includes many songs,” Rannankari states.

“The Moomin fairy-tale world is great and it has many layers, tones and depth. We make the fairy-tale world real in the opera. The picture of the times can be seen in the way of singing. The audience can have a peek at unseen sides of the Moomin Museum,” tells Producer Elina Orjatsalo from TAMK Music Academy.

“We decided to make the Moomin opera because the right voices and suitable characters could be found among our students. It is also a good work pedagogically. We think that the Moomin world suits an opera because we are in Finland and the world’s only Moomin Museum is located in Tampere,” tells Producer Orjatsalo.

In addition to the large number of performers, other people are also needed to make the performance succeed. One of them is Director’s Assistant Veera Aaltonen. She assists the director for example by writing down details in the score or notes of the opera.

“I write down important matters which should take place on the stage. For example, when the performers are supposed to step on the stage and where their places are. This makes directing a lot quicker as the director can check matters if something is unclear,” says Aaltonen.

After intensive practising there will be the moment when the auditorium is full and all performers give their best. It is a result of creativity and artistic views and a climax of busy and intensive work. Combined with a sprinkle of stage magic, it is difficult to find words to describe the spell. It has to be experienced personally.