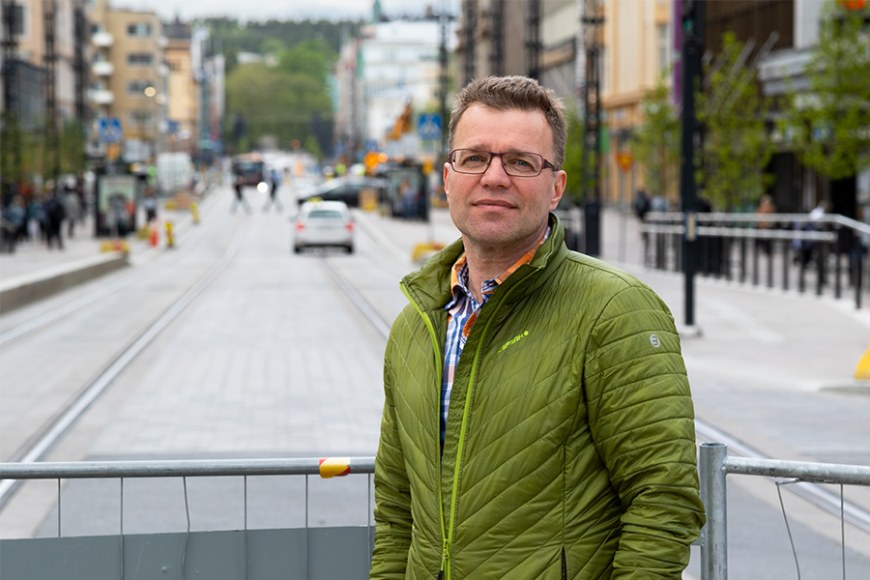 “I hope that the project enables new openings and experiments which have social and business potential also internationally,” Petri Pohjola states.
5G technology, artificial intelligence, internet of things and cloud services bring new possibilities to development of intelligent public transport. The massive public transport reform in Tampere with the starting tramway traffic has encouraged inclusion of public transport stops to a part of the intelligent traffic system.

“At their best, stops have a shelter and display showing when the next bus will come. At their barest, stops are metal posts along streets. Intelligent public transport stops can enable smooth travel and better travel experiences in development of the whole urban infrastructure,” tells Senior Lecturer Petri Pohjola from Tampere University of Applied Sciences.

Passengers’ needs at the centre

Petri Pohjola is in charge of preparation of the joint Älypysäkki project of Tampere University, TAMK and Business Tampere at TAMK. The objective of the project funded by the Council of Tampere Region is to create an overall concept for an intelligent stop which considers the passenger’s whole travel from the starting point to the destination.

“The intelligent stop is planned to make the tramway and its feeder traffic smoother but we also want to make services available at home and consider the way passengers want to travel from the stop to their final destination. It can mean the possibility to book an electric scooter or bike for the final mile of the travel,” tells Kai Hämäläinen, who was in charge of the project preparation at Tampere University.

“We see the stop as much more than a shelter where buses and trams stop. We want to map how entire trip chains could be made as smooth as possible with intelligent solutions. The travel already begins at home and thus it is important to think how the intelligent stop services can be reached home,” Pohjola explains and gives a practical example of how the intelligent stop could serve passengers in the future.

“The mother of a family may want to check before leaving home that there is room for a pram in the tram arriving at 18.55.”

Public transport users and their smooth travel by means of new technologies are at the centre. The aim is to create an overall concept in which new applications and services are combined to entities which best serve the passenger by making the travel easier, smoother and even experiential.

“There could be something activating on the stop to have something else to watch than the personal mobile while waiting for the tram or bus,” Pohjola envisions.

Even if the project is creating a concept for an intelligent public transport stop, some new solutions will also be tested. The Hervanta campus stop offers a good test environment for new intelligent stop services. The region’s 5G network enables testing of artificial intelligence solutions at the stop.

“A potential artificial intelligence solution is how main line delays could be considered in the feeder traffic,” tells Hämäläinen.

“Artificial intelligence does not have to be complex algorithms. It can as well be simple things and opening of existing information for users,” Pohjola adds.

Other experiments to be made at the Hervanta stop will be decided based on the initial accounts. Because of the coronavirus, the project will actually start after the summer when TAMK will map the development needs and Tampere University the possibilities to use existing and available data in different artificial intelligence applications in order to serve passengers.

Hämäläinen and Pohjola think Business Tampere’s contribution is significant both in project preparation and implementation.

"The city’s participation in such an everyday life related project is very important.”

Pohjola reminds that the multinational outdoor advertising company JCDecaux Finland was chosen to the supplier of tram and bus shelters in Tampere based on competitive tendering.

“Because the stops are not owned by the city, it is important that their commercial operators also become interested. The redeeming feature of having a multinational commercial operator is that new solutions can spread internationally if they have business potential.”

The project focuses on requirements analysis and concept development. The objective is however to create an open development platform where research institutions, the city and companies can test their solutions. During the initial mapping in the autumn, the aim is to find companies which are interested in testing their solutions as part of the intelligent stop development.

“I hope that the project enables new openings and experiments which have social and business potential also internationally,” Pohjola states.

The Älypysäkki project is a regional research and development project funded by the Council of Tampere Region and European Regional Development Fund. The eight-month project will begin in autumn 2020. The project is coordinated by Tampere University and the other participants are TAMK and Business Tampere.