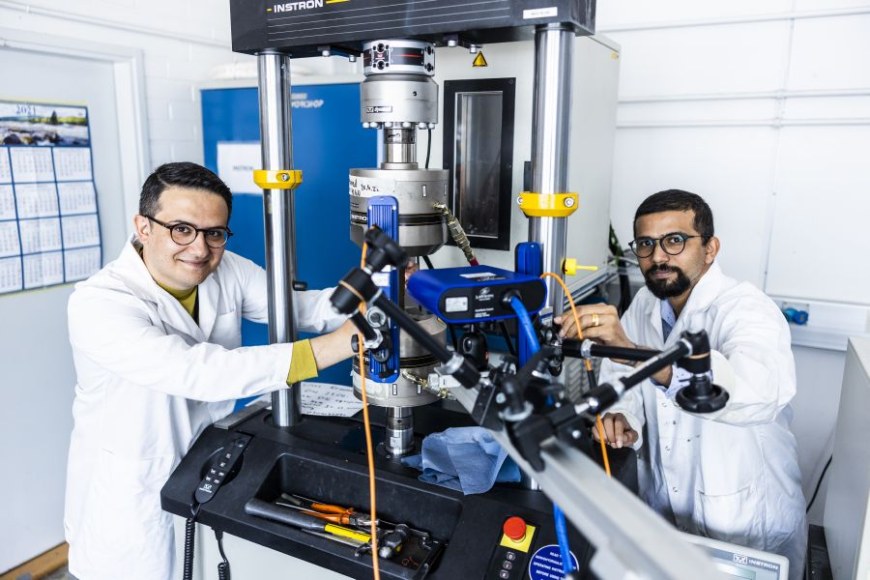 Doctoral Researchers Farzin Javanshour and Royson Dsouza aim to extend the findings from biocomposites to conventional composite production. Here they are investigating mechanical properties. Photograph: Jonne Renvall/ Tampere University
In a recent study, doctoral researchers at Tampere University developed measurement techniques and discovered new information on the tensile properties and durability of biocomposites based on, for example, flax. The four-year research on plant-based fibres as building materials for composites was part of the European FibreNet education network project.

The research brought the young scientists face to face with an age-old fact: nature is complex and natural fibres are highly complex structures. Adding natural fibres to a composite does not automatically make the material ecological or hardy. The basic research carried out in the FibreNet doctoral education network provided information that can be used to predict real structure properties based on micro-level phenomena.

According to Sarlin and Kanerva, biocomposites are based on natural components, such as flax fibres, directly or through a chemical process. In biocomposites, the main function of natural fibres is to strengthen the material.

Doctoral Researcher Farzin Javanshour studied how flax fibre can be used to strengthen composites and increase their lifetime. The European Union is aiming for self-sufficiency in flax production and the research being conducted in Tampere supports this goal.

According to Javanshour, biocomposites have many good properties, such as low density and excellent damping properties. They also have ecological merits, and good life end options. However, their long-term performance is not optimised. Javanshour’s research showed that flax treated in a certain way improved the properties of biocomposites.

“The use of swollen (namely non-dry) fibres enhanced the hygrothermal stability of biocomposites in wet environments by up to 50%. The impact and fatigue performance of biocomposites was enhanced by 100% and 20%, respectively,” Javanshour says.

Doctoral Researcher Royson Dsouza was seeking to find out what the positive impact of biocomposite material really is. He developed a new measurement technique to study the durability of natural fibres in microscale, in which an invention disclosure was also filed at Tampere University.

“The microscale sensor solution I developed is suitable for testing the mechanical properties of both synthetic and biobased fibres,” says Dsouza.

According to Kanerva, who supervised the study, Dsouza’s results provide new information on how to ensure the integrity and homogeneity of materials.

“The research will provide industry with useful information on the behaviour of composite materials in the most challenging applications, such as wind turbines,” Kanerva says.

Natural fibres can be used to reinforce such structures as racing cars, helmets, and boats. There is also a clear application potential in the sports equipment industry.

“Young people in particular want to invest in equipment made from natural materials. A good example is a surfboard made of biocomposites. Doctoral Researcher Pauli Hakala from Tampere University has studied sports equipment applications,” Kanerva says.

Scientific support and career opportunities from the education network

As well as providing valuable research results, the training network offered doctoral researchers both international academic support and opportunities for cooperation with universities and companies right from the start.

“One of the best things the project produced is gaining a broader understanding of the challenges circular material design and development is faced with. I will continue research on developing the potential of sustainable composites for various applications, such as hydrogen energy storage tanks for automotive applications,” Javanshour explains his plans.

Fellow researcher Dsouza agrees with Javanshour. Working together and with a collaborative network of researchers and partners around the world will continue to be important.

“This project has enabled collaborative research and publications. I also feel I am bridging the knowledge gap between the properties of fibres and fibre-based products. This project is very important to me as a researcher because it focuses on environmentally friendly materials for the future,” Dsouza adds.

The FibreNet project, which ended in May, was an educational network where 15 early-career doctoral students from across Europe studied biofibres in their own research projects within the network.  The multidisciplinary, international network gave the doctoral students significant peer support and professional guidance, as well as state-of-the-art technology and contacts in the industry. The network received funding from the Innovative Training Network (ITN) grant which is the European Union’s Marie Skłodowska-Curie Actions (MSCA).

Professor Pasi Kallio, a biomedical engineering professor specialising in micro- and nanotechnologies, coordinated the project at Tampere University. In addition to biocomposites, a method based on microrobotics was developed in Tampere by a Doctoral Researcher Ali Zarei to automatically measure the tensile properties of biobased fibres.

What is a biocomposite?