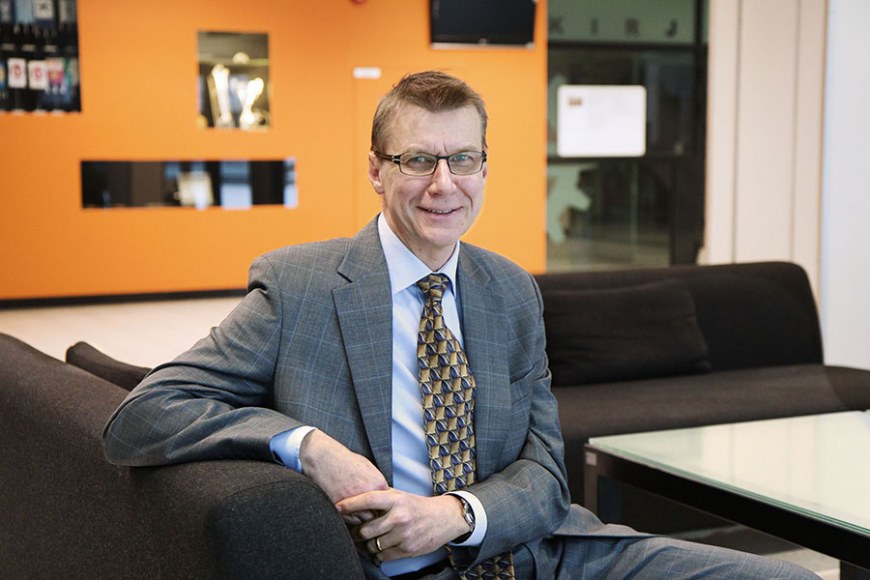 Professor Jussi Heikkilä estimates that the Covid-19 pandemic will promote developments where production is organised in the same continent as consumption. However, Finland can never become totally or even largely self-sufficient. Photograph: Virpi Andersin
The Covid-19 pandemic is accelerating changes in companies’ supply chains, which vary between businesses, products, and fields.

Professor Jussi Heikkilä, who has studied supply chains, estimates that the changes are very likely to intensify, and greater attention will be paid to the risks involved.

Heikkilä is professor of industrial engineering and management at the Faculty of Management and Business at Tampere University.

“Regionalisation has already been increasing for some time because manufacturers have organised more production in their own continents. It has been one response to the growing ecological concerns and to disappointments with, for example, the quality of products or the reliability of delivery,” Heikkilä says.

A study conducted at the former Tampere University of Technology showed that Finnish manufacturing companies offshored about twice as much production from Finland to other countries in 2010–2015 than was reshored to Finland. Labour costs were the sole significant reason for offshoring production while the grounds for repatriation were more diverse.

“On the one hand, production was reshored because of quality, flexibility and fast delivery. On the other, skills and capability-based factors - such as proximity to R&D and product development, access to technology, skills and knowledge, and time-to-market of new products - played a role. Such developments are likely to increase, and the risks entailed in supply chains will be under more scrutiny,” Heikkilä explains.

According to information published by Yle broadcasting company, several small- and medium-sized businesses in Finland are planning to reshore production to Finland.

Heikkilä says that SMEs have a smaller risk-bearing capacity than larger companies, which is why they are particularly keen to secure the availability of supplies.

“Thus far, I have been somewhat surprised by how few reports there have been about Finnish factories completely halting production. Very lean supply chains are an exception. They include the automotive industry and other assembly plants with continuous production where significant components are imported to Finland,” Heikkilä says.

He gives Valmet Automotive as an example. The plant has partnered with Daimler to manufacture two models of Mercedes-Benz cars.

“The factory has been in a complete lock down since the Covid-19 epidemic because Daimler has stopped production in its factories in Germany. As a result, deliveries to Uusikaupunki have stopped. However, factories seem to be reopening now that the restrictions have been eased,” Heikkilä says.

Companies are ready for rapid changes

According to a barometer produced by the Finnish Chamber of Commerce, 61% of companies lack components and 76% have logistical problems. According to Yle’s survey, 63% of companies are planning to increase their own production because of Covid-19. Will these companies relocate back to Asia as soon as the pandemic ends?

“Companies make choices in their supply networks as things change. Sometimes the changes can be very rapid as they are now during the Covid-19 pandemic. In the big picture, we see a trend towards regionalisation, but, on the other hand, national economies are very interdependent. This is true especially for such small and open economies as Finland that depend on exports,” Heikkilä answers.

Heikkilä points out that China’s significance is likely to decline and that it had already been declining before the coronavirus.

“According to our study of the years 2010–2015, the most important target region for offshoring of Finnish manufacturing was Eastern Europe followed by Asia and especially China,” Heikkilä says.

According to a study by ETLA Economic Research, Finnish companies’ dependence on imports is especially high in electronic components, motor vehicle parts, pharmaceuticals, and pharmaceutical precursor chemicals. More than 80% of these intermediate products are purchased abroad. In many areas, which are critical for the functioning of society, the percentage is lower than this.

ETLA’s researchers Jyrki Ali-Yrkkö and Tero Kuusi propose a new type of regional development as a solution to reduce the risks involved in globally decentralised value chains. This can mean the formation of continent-specific or even country-specific production chains, which would ensure that border closures do not jeopardise production. However, the researchers found it possible that production might transfer back to low-cost countries when things get back to normal

“Regionalisation has already been under way and the Covid-19 pandemic will strengthen it. On the other hand, it is not conceivable that we would become fully or even largely self-sufficient in a country like Finland,” Heikkilä points out.

According to Heikkilä, Finland’s strength and prerequisite for economic success is its ability to cooperate internationally in most supply chains.

“On the other hand, products that are critical for the security of supply will certainly be assessed on a new basis because of the Covid-19 pandemic. For example, the problems around importing protective masks to Finland highlight the shortcomings in our preparedness, production, and procurement skills,” Heikkilä says.