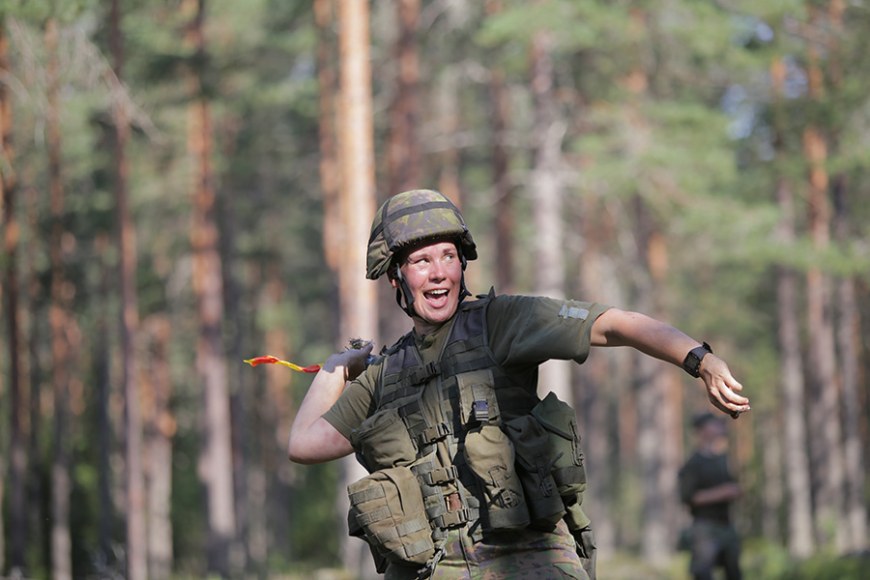 Director and Scriptwriter Ninni Rokosa wants to have an impact on matters by telling stories. Through the Naissotilaat TV series she can show how the voluntary military service educates and changes girls and women. Rokosa tells that other equivalent Finnish series have not been made earlier. At the moment they are already filming the third season of the TV series.

The series is now on the shortlist for Kultainen Venla for the second time. Rokosa thinks it is great to be among the seven best Finnish TV series.

“Thank you to jury for their good taste. The public vote is a great thing because the viewers can decide on the winner. Winning the public vote is of great value,” Rokosa continues and hopes that fans notice the vote possibility.

Young women’s viewpoint is brought out

Rokosa’s aim was to make a series on young women with whom young girls and women can identify. At the same time viewers can look up to their courage, genuineness and independence. In her opinion, women are typically only seen in certain too narrow roles in media and thus girls and women need new role models. The real world is full of them.

“Scriptwriting and direction are creative and artistic work which make it possible to have an impact on the surrounding world. It has been important to me from the beginning,” Rokosa states.

In the Naissotilaat series women are clever and goal-oriented and have voluntarily decided to enter a strange, new and challenging masculine world. Since her teens, Rokosa has wanted to have an impact on important matters. The series includes many of them. Viewers are for example aroused to think that if the military service makes boys men, what happens to girls. The series also tells about the change and growth from young women’s perspective and in their personal voice.

“Attitude, belief in oneself and stamina are important values I want to bring out through the series,” Rokosa emphasises.

Fearless attitude, belief in oneself and willingness to develop

Rokosa graduated as Bachelor of Culture and Arts from Tampere University of Applied Sciences with Director and Senior Lecturer Arto Koskinen as her film direction and screenwriting teacher. According to Rokosa, teachers may have a strong impact on the future of students.

“I have always strongly believed in myself and had many motivation sources. During my studies at TAMK, Arto was one of my most important teachers. He encouraged me.”

In Rokosa’s opinion, good directors and scriptwriters are curious and go to strange and weird places. They want to explore the discomfort zone. Fearless and passionate attitude is needed but also sensitivity. Introversion and good sense of humour are beneficial.

“In addition, willingness to continuously learn and develop and interest in everything are needed but determination, stamina and attitude also help.”

The Kultainen Venla programme will be aired on 17 January on MTV3 channel.

In the main photo, Anne Isokorpi, one of the main characters of the Naissotilaat 2 TV series, practises throwing a hand grenade in a combat exercise in Kiikala. Photo: Kirsikka Lyhteilä