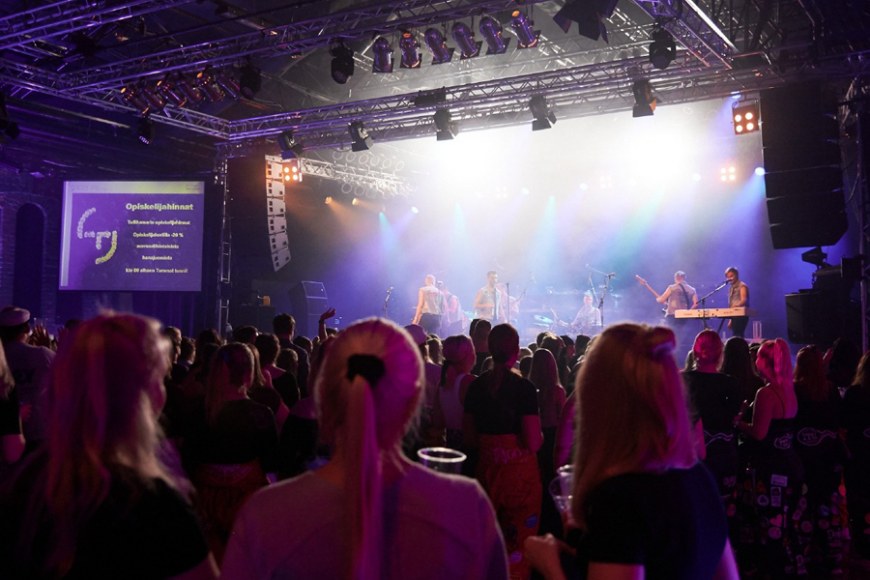 For the rest of the evening, the students headed to a party at Pakkahuone.
Among other things, students organised flashmobs on buses and introduced people to the sitsi culture on Wednesday.

Students have been involved in many events during Tampere University’s opening week of the new academic year. The purpose of the various performances and events was to give people a glimpse of student culture and to start fresh traditions in the new higher education community.

“We were able to gather five singers. Some of us are working and others had obligatory lectures, but we were still a nice group of singers. After each performance, our fellow travellers applauded us,” says Noora Haimila, vice-chair of Teekkarikuoro responsible for organising gigs.

The bus passengers heard such songs as “While the potatoes boil” and “March of the water boys”. Tampereen University Singers also surprised people with their performances on buses.

Both choirs have long histories; Teekkarikuoro was founded in 1985 and Tampere University Singers in 1964.

On Wednesday, several other student associations also presented their activities. The Akateeminen Mahti sports club organised dance performances in Sorsapuisto and the Spinni association for electronic music enthusiasts played in the Sori square.

“Our student community members are multitalented and it is great that we got to present their skills in the opening week,” says Meeri Pekkola, Specialist in Community Affairs at the TREY Student Union.

The new students of TAMK celebrated the Tursajainen event yesterday. The party began with a procession from the TAMK campus to the Central Square where the new students swore an oath.

The sitsi culture is an integral part of student life

In the afternoon, an open sitsi event was organised at the Klubi restaurant. The purpose was to offer everyone interested an opportunity to see this academic table party, which is an integral part of the Finnish student culture.  One hundred people had registered in advance.

“The idea was to let the students show what the sitsi culture is all about. At our University, there are several variations of this culture and the event offers people a chance to get familiar with this great tradition,” Pekkola says.

“I wanted to learn what the sitsi is all about. Finnish students talk about it a lot,” Müller says.

“I thought I should come here because I have never been an active participant before,” Salo says.

For the rest of the evening, the students headed to a party at Pakkahuone where rap artist Pikku G performed.