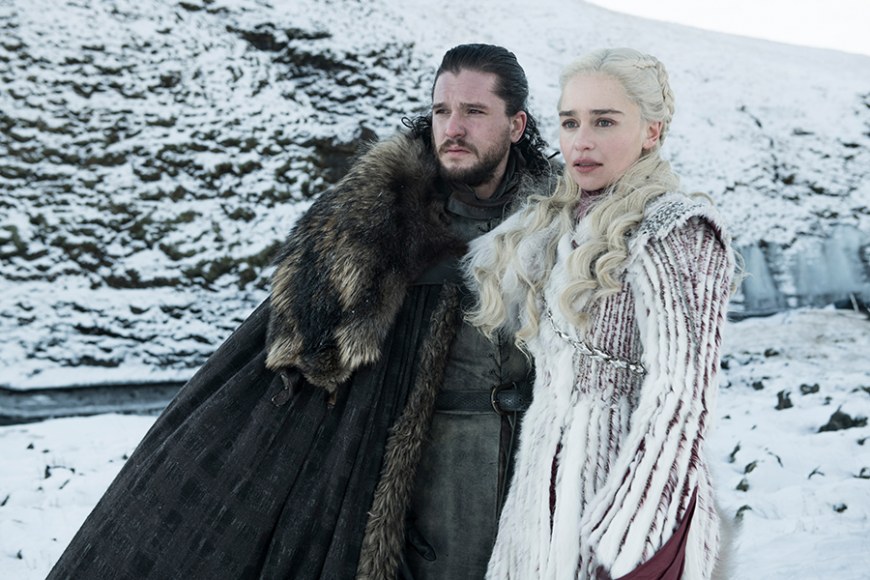 Jon Snow and Daenerys Targaryen are romantically involved even though they are close relatives. Typically for Game of Thrones, their relationship was gradually revealed. The gloomy Jon Snow character is played by Kit Harington while Emilia Clarke plays a queen who rides a dragon.
The extremely popular Game of Thrones television series is coming to an end. The epic drama has changed conceptions about fantasy, generated an active fan culture as well as raised a new generation of fantasy enthusiasts. Spoiler alert! This story includes spoilers from the last season of the series.

Game of Thrones is probably the most popular series in television history. The eighth and last season of the series, which is situated in a fantasy world, is under way. Millions of viewers are holding their breath in anticipation of the end of the story.

Doctoral Researcher Markus Laukkanen is investigating modern fantasy fiction as part of culture in the digital age. Among other things, Laukkanen has analysed how active participation from fans has changed the role of the audience in narratives such as Game of Thrones.

“It is very hard to exaggerate the significance of Game of Thrones for the fantasy genre and television. Such a large phenomenon does not emerge often,” Laukkanen says.

The television drama has not pleased all readers

The television series is based on George R.R. Martin’s series of epic fantasy novels called A Song of Ice and Fire. Game of Thrones, the first book in the series, was already published in 1996. For several years, fans have been keenly awaiting The Winds of Winter, the next part of the saga. George R. R. Martin calls the last novel in the series A Dream of Spring.

“The novels have their own thematic lines. When the television series deviated from them, the vision of the series’ writers differed from the storylines of the novels,” Laukkanen says.

Martin was closely involved in the first seasons of the television series. For example, he wrote one episode for each season. However, during the last seasons of the series, Martin has left the production team and focused on writing the remaining novels. Nevertheless, he has discussed the main points of the story with the series’ producers.

“There is a sentiment among the viewership that the last seasons of the series are not as witty as the first ones. All fans do not have faith in the cleverness of the closing season. For example, the dialogue has not reached the same levels as when the series started. On the other hand, there have been many other excellent aspects in the series, such as the visually pleasing production design and special effects,” Laukkanen explains.

Time was right for a fantasy spectacle

Because of the violent and sexual content, the series is not suitable for children; the series has been the most popular among young adults.

“The series took fans by storm. The age group that was entering adulthood at the start of the series had already learned to read and watch fantasy. It grew with the Harry Potter novels and films. Peter Jackson’s The Lord of the Rings film adaptations are also part of the same phenomenon,” Laukkanen says.

Harry Potter and The Lord of the Rings also dealt with serious themes, but Game of Thrones clearly took fantasy in a more political direction. Complicated interpersonal relationships and conflicts have been the best aspects of the series.

“Game of Thrones has created a new formula for adult fantasy in people’s minds. The popularity of the series has evidently introduced many new readers to fantasy fiction,” Laukkanen says.

Laukkanen himself first watched two seasons of the television series before reading the epic A Song of Ice and Fire series.

“It is very common that people find the books through watching the adaptation,” Laukkanen says.

More than a television series

The increase in the popularity of the series has happened at the same time as online streaming culture has gained popularity. The internet has enabled the emergence of a new kind of fan culture where fans can create and easily share content related to the series.

“Game of Thrones has converted from a television series to what might be called event television. It has such a strong position in popular culture that if people do not watch it, they may easily feel excluded,” Laukkanen says.

The mostly online community that has grown around the series speculates on the events of the series, writes fan fiction, and organises events.

Traditional media have also taken note of the popularity of the series.

“Large international media outlets follow the series very closely. Immediately after a new episode, many major newspapers analyse the events and their significance. Ending up in such a position is a rare achievement for a television series,” says Laukkanen.

The last season of Game of Thrones is under way. Laukkanen thinks that the community grown around the series will continue to exist even after the last episode.

“I strongly suspect that fans will not stop after the last episode because the online community is very active and well connected. It is probably ready to switch to another series when Game of Thrones ends,” Laukkanen says.

Westworld, for example, which is another successful HBO series, seems to be targeted at the same audience.

“The fan communities of these two series seem to largely overlap,” Laukkanen notes.

Game of Thrones has been a major financial investment for its production company HBO. In addition to the huge cast of characters, the series has required many locations across Europe and an enormous special effects budget.

However, the investment has paid off. Encouraged by the success of Game of Thrones, HBO is planning multiple spin-off series taking place in the world of Westeros.

“When the series started, HBO was likely to be aware that there was a demand for this kind of fantasy for adults. It is interesting to follow up on the way other production companies are trying to enter the same market. Many other large-scale series are already in production,” Laukkanen says.

In addition to HBO, for example Amazon and Netflix are planning their own productions situated in fantasy worlds.

Game of Thrones redefined the rules of fantasy

Unpredictability and surprise have perhaps been the biggest contributors to the success of the series: spectators have never been able to be sure which of the characters will survive. The series also lacks an obvious main character around whom the story revolves.

“This has been Martin’s modus operandi. He has taken the traditional expectations of the fantasy genre and twisted them into new directions,” Laukkanen says.

According to Laukkanen, the television series has deliberately tried to challenge the preconceptions of the fantasy genre.

“As a genre, fantasy has had the reputation of being a generic and predictable type of fiction. It has also often been regarded as somewhat childish. In the making of Game of Thrones, this vision was deliberately unravelled. There were fewer fantastical elements in the first seasons, which focused on politics and relationships. However, especially in the last two seasons, there has been a huge deal of fantasy,” he explains.

The bar is raised to new heights

The popularity of Game of Thrones has also had an impact on fantasy fiction more widely. Increasingly more fantasy is published, and the career of many authors has taken new wing.

The importance of the series is also reflected in readers’ expectations.

“Readers’ conceptions and expectations have changed. Game of Thrones has raised the bar. Fantasy can no longer be the same that it was eg twenty years ago. Authors today are also more ambitious,” Laukkanen says.

However, the change of the fantasy genre was already seen in the 1990s when George R.R Martin and a few others started to shift the themes of the stories in a new direction.

“In the eyes of the general public, Game of Thrones epitomises this shift and George R.R. Martin symbolises the change. However, many other writers have been involved in effecting this change,” Laukkanen says.

“I don’t think fantasy will ever be the same again. What people are reading now has an impact on what is written. Game of Thrones has changed the perception of what fantasy means,” Laukkanen notes.

Who will get the iron throne?

Fans of the series across the world are pondering one question: who will eventually get the iron throne?

Laukkanen hopes that the series will stay true to itself until the end.

“If the end of the series falls short of expectations, I will still have my work cut out as a researcher. However, as a fan, I hope that the creators of the series will surprise us one more time. When two episodes are still forthcoming, the conflict between Cersei and the other main characters seems poised to be in the main role in the ending of the show. I hope that there will be something besides this in the background,” Laukkanen says.