Even infants recognise pain on other people’s faces 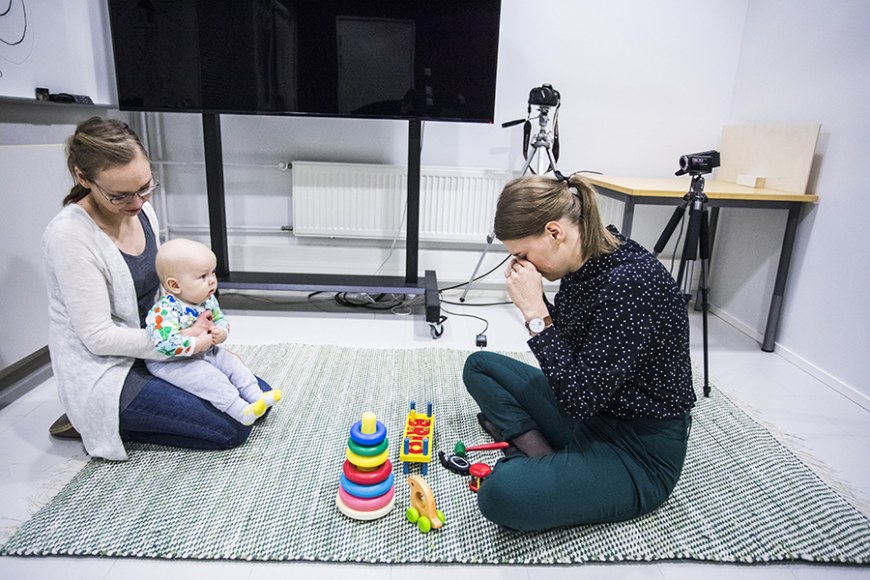 8-month-old Eino Takalo is sitting on his mother Liisa Takalo’s lap and looking at Research Assistant Reeta Jääskeläinen who is expressing feelings of pain with her face and gestures.
Parents can help their children to develop empathy skills by talking about the occurrence and meaning of feelings. A new study at Tampere University is investigating the development of empathy in infants.

The ability to feel empathy is a key aspect of people’s psychological skills and well-being, making it very important to detect problems in empathy development as early as possible.

Academy Research Fellow Mikko Peltola directs the study, which is analysing data from a hundred 7-8-month-old babies who are all healthy and born full-term.

The research setting is simple: A researcher shows an infant that she is in pain. When the baby notices a change in the researcher’s behaviour, the expressions, gestures, and vocalisations of the baby are observed. Changes in the babies’ behaviour reflect how they experience empathy.

“If another person shows signs of pain or fear, children usually look a little worried. The baby may wonder what those feelings are all about,” Peltola says.

For example, babies may express concern in their voice or interrupt their previous activity.  Sometimes a surprising situation can startle the babies and make them cry. In the data analyses, the babies’ own distress is distinguished from their experience of empathy.

The emotional development of the infants participating in the study will also be monitored until the age of four.

A lack of empathy can lead to aggressive and antisocial behaviour

“Antisocial features include aggressiveness, emotional detachment from other people, and problems in recognising emotions. In addition, atypical physiological reactions to other people’s feelings may be detected. Markers of antisocial characteristics can also be observed with brain imaging methods,” Peltola says.

There are two key research questions in the new infant empathy study: How well does babies’ general interest in human faces correlate with empathy? Furthermore and more specifically, is attention to another person’s fear associated with empathetic behaviour?

A previous study conducted at Tampere University found that the more an infant paid attention to human faces, the more willing he or she was to help at the age of two. In addition, babies who showed less interest in faces exhibited more emotional coldness at the age of four.

“If a small child does not show empathy, it may be a cause for concern. As the child grows, a lack of empathy can lead to bullying and aggressive behaviour towards other children,” says Peltola.

Empathy is both inherited and learned

In everyday language, empathy has many meanings, and sometimes it is confused with the term “sympathy”.

“Empathy is a slightly difficult concept because of the different definitions. In our study, empathy is defined as an automatic tendency to share another person’s emotional state. Sympathy, in turn, is an expression of compassion for another person, such as providing comfort. However, empathy and sympathy are linked regardless of the definitions,” Peltola says.

As all psychological characteristics, empathy is partly heritable and partly learned. Early childhood is an important time as it creates the basis for later psychological development.

However, Peltola comforts parents by reminding them that parents can never fully control child development.

“The perspective of many parents expands when their second child is born. When parents take care of their second child, they discover that children are individuals already at birth. Even though the parenting methods may have been exactly the same as those of the first child, children develop individually,” says Peltola.

Parents can teach empathy to their children

Parents can support the child in the development of empathy. If another child feels bad about something in the playground, parents may discuss the events with their child.

“A questioning approach often works in these situations. You can ask the children how they feel or why their friend is upset. The child can also be encouraged to consider what he or she could do to help the friend who is feeling bad,” Peltola explains.

The adults’ own example also plays a significant role. If the parents show empathy and sympathy towards other people, children notice it.

“Parents should show empathy and interest in the emotions of their own child. If someone shows fear or sadness, parents can help their children understand and control their emotions with the help of empathetic reactions,” Peltola says.