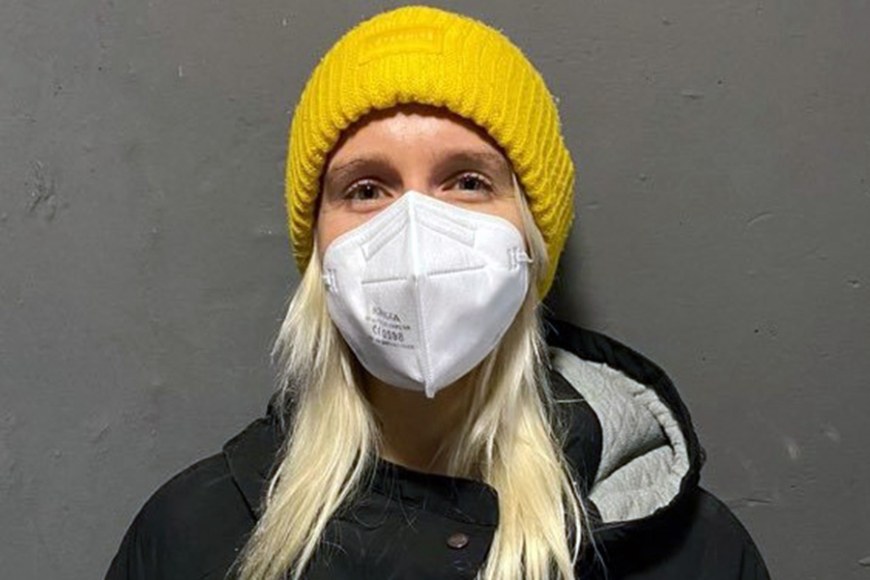 Julia Katila, who studied the interaction rituals of politicians, found that people have introduced new means of expressing their emotions and maintaining interaction during the COVID-19 pandemic. Photograph: Elise Rehula
Maintaining social relationships by touching and shaking hands is so deeply ingrained in people’s behaviour that keeping the physical distance required for curbing COVID-19 does not always succeed. However, COVID-19 has made people try totally new haptic means to express themselves.

According to the study, touch as a gesture of reconciliation is such an important issue for humans and other primates that the distancing rules required by managing the COVID-19 pandemic may become secondary in the management of social relationships.

The researchers analysed three stages of haptic ritual where politicians negotiate transitional movements when one of the parties begins a handshake. The stages of ritual are correction, rejection and apology.

The analysis shows that politicians use their entire bodies when greeting others. The movement trajectories leading to a forbidden handshake and skin contact are quickly retracted, and the confusion is covered with speech, gestures, and bursts of laughter to avoid the loss of face caused by the social mishap.

The examples used in the study were from the early months of the COVID-19 pandemic in spring 2020.

In March 2020, Mark Rutte, Prime Minister of Netherlands, said in a speech that “we are stopping shaking hands”. After that he extended his hand to Jaap van Dissel, a scientific representative of the Dutch Institute for Public Health.

The men shook hands for a moment, after which a confusing situation arose when van Dissel expressed reproach with his gestures and body language implying that Rutte had violated the rules of touching he had just announced.

Rutte first turned away from van Dissel but soon turned back and grabbed him by the arm as a sign of apology. He thus violated his own COVID-19 instructions for the second time and caused further confusion.

The men touched each other with their arms and elbows until the situation played out in joint laughter. They walked off stage with Rutte shepherding van Dissel with a hand on his shoulder.

Former President of the United States Donald Trump is known for arbitrary, overly long handshakes, which he uses to demonstrate power towards the person he is shaking hands with. Trump had difficulty changing his behaviour during the pandemic.

The researchers analysed a situation where Bruce Greenstein, Vice President of a home care organisation, spoke about pandemic response as an invited guest of Trump’s in March 2020.

After the speech, both men expressed their thanks and turned to face each other. Deviating from the usual handshaking practice, Greenstein raised his right elbow towards Trump who in turn raised his hand to Greenstein. The hand trajectories did not meet, and disappointment was reflected on Trump’s face.

Trump made a positive comment (“Okay, I like it. It’s good.”) and moved to the microphones and smiled. According to the researchers, Trump used these gestures to give the impression that he appreciated his guest’s behaviour. It implied that he had independently come to the same conclusion, which enabled him to recover his status and social face despite the confusion.

In March 2020, German Chancellor Angela Merkel and Minister of the Interior Ernst Seehofer did a greeting performance where a handshake attempt and its rejection ended in general laughter.

Merkel extended her hand to Seehofer who was sitting at a table and who reacted with an apologetic look and did not shake hands back. Instead, he made a dismissive gesture with his hand and looked confused. Merkel stepped back, raised her hand, and looked surprised. Both indicated with their gestures and movements that they recognised the awkward greeting situation.

People nearby reacted to the situation with laughter. The woman closest to the encounter between the two politicians joined the situation by smiling and creating a humorous atmosphere. In addition, she showed that she recognised the problem by first holding her own hand and then producing a cross gesture with her hands. By raising her palm, Merkel showed that she understood the refusal to shake hands.

After these gestures, both parties seemed to be unanimous that shaking hands should be stopped because of COVID-19.

Touching is not just physical

The researchers emphasise that greeting rituals are essential for maintaining and renewing social relationships. They are not only important to the people who greet but to the other participants present in the situation who see and witness the greeting. This makes the changes of choreography and corrective actions also significant.

The researchers also found that touch is not just physical. When physical contact was banned, people adopted other means to express emotion such as remote greetings, gesturing and laughter.

The researchers estimate that hand and bodily gestures, co-laughter and facial expressions are significant behaviours which also help to remedy confusing social situations.

In addition to politicians’ greetings, the researchers did auto-ethnography about people’s everyday encounters. Their observations show that people are imaginative and find creative ways to ‘touch’ each other without physical contact.

The analysed cases of politicians are from March 2020 when the COVID-19 pandemic was still starting, after which the restrictions of interaction rituals have become much stricter.