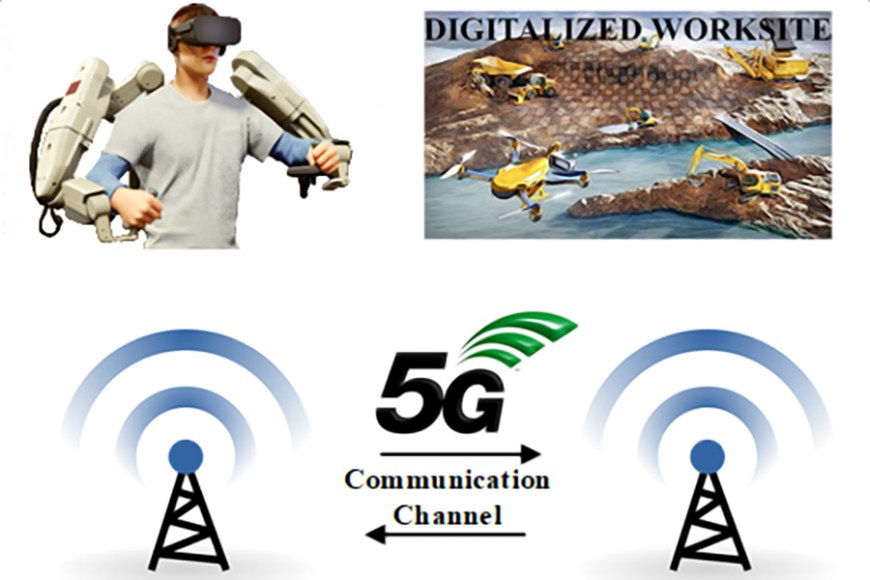 Multimodal human-machine interface enabling telepresence at digitalized remote worksites.
Robots have an unparalleled ability to work tirelessly with unfailing precision. However, reprogramming robots to perform new tasks is an arduous process. The TITAN project now underway at Tampere University will speed up the reprogramming of robots by tapping into the latest advancements in robotics, such as a force-sensing exoskeleton that is worn around the arm.

Heavy-duty mobile machines have an important role in supporting Finland’s technology industries and its export sector. Heavy machinery include not only forestry, construction and mining equipment but also lifting and transfer equipment used in factories and ports. Many of the Finnish manufacturers of these machines are global market leaders in their fields, and in the past few years many have set their sights on developing robotic mobile machines to sustain their competitive advantage.

Robots are known to far surpass people in their ability to perform specific tasks accurately and tirelessly, as long as their tasks and work environment remain unchanged.

“Industrial robots are perfect for the repetitive tasks that characterise mass production, such as mobile phone assembly in a factory environment. However, reprogramming an industrial robot for a new task or environment is an extremely time-consuming process. We are looking for ways to facilitate this process,” Professor Jouni Mattila says.

“During the TITAN project, we will develop a generic and fully scalable human-robot interface that is essential for Finland’s technology industry to maintain a competitive edge. We are working closely together with companies. After the project we will apply the results to use cases provided by companies,” Mattila says.

Robotics research has taken major leaps forward in recent years following the integration of advanced force-sensing robotics with machine learning. In the teaching-by-example method, the operator hand-guides a robot through a task, reducing the need for explicit reprogramming. This works well with small-scale robots that are equipped with a force sensor, which speeds up the learning process and limits the force exerted by the robot to ensure it stays within a safe range for the human user. However, the future competitiveness of Finland’s technology industry relies on the capability of robots to lift up heavy loads weighing several hundreds of kilograms and transport them over a distance of several metres.

“The teaching-by-example method does not work very well in this scenario, because the kind of force sensors required by heavy-duty machinery are expensive, easily breakable and not readily available. We therefore need new solutions to teach human-like skills to a human-robot interface that is tailored to the needs and strengths of Finland’s technology industry,“ Mattila says.

The solution could be the deployment of a robotic exoskeleton, a commercial robot that a human operator wears around the arm and that senses the forces applied by the operator and mimics the operator’s movements to control a robotic arm mounted on a mobile machine.

The first research challenge the team of researchers need to address involves the development of force-sensing and remote-controlled robotics for large-scale mobile machines, where the force generated by the human arm, amounting to a few kilograms, is scaled up Superman-style to the movements and forces of machines that carry loads weighing thousands of kilograms. The project builds on the results of earlier world-class research where the researchers developed a remote handling solution whereby a force-sensing large-scale robotic arm attached to a mobile machine performs functions based on control signals from an exoskeleton.

The other challenge to be addressed during the project involves the teaching of human-like skills to a robot with the help of machine learning. The operator is provided with the forces sensed by the robot and 3D video and audio from augmented reality. Gamification is utilised in the design of the user interface, as the forces sensed by the robot may be either real contact forces relating to the task at hand or virtual safety fences that prevent collisions in a digitalised environment. The operator’s role is to monitor the scalable multi-robot system, address any problems that may occur and, if necessary, teach the robots new tasks.

“The forces felt by the human operator and the robots must be relayed back and forth between the operator and robot once every millisecond, which the new 5G networks are capable of doing. Force-sensing robotics based on remote presence enable – for example, combined with the new 5G test network deployed on the Hervanta campus – the development of innovative ICT technology products, such as multisensory scalable remote presence interfaces in response to company-specific needs,” Professor Mattila says.