A study predicts smooth interaction between humans and robots 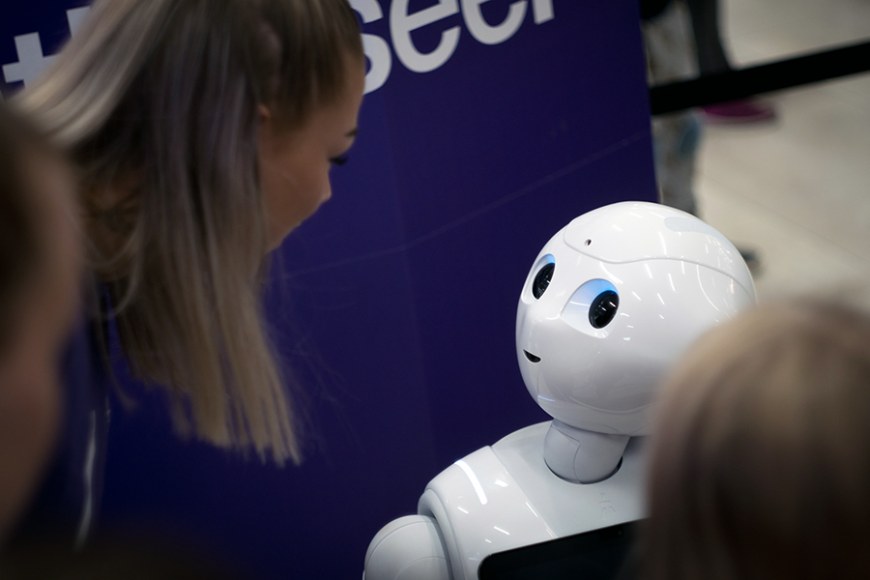 With the rapid progress in robotics, it is anticipated that people will increasingly interact with so called social robots in the future. Despite the artificiality of robots, people seem to react to them socially and ascribe humane attributes to them. For instance, people may perceive different qualities – such as knowledgeability, sociability, and likeability – in robots based on how they look and/or behave.

Researchers at Tampere University investigated the matter by studying the physiological reactions that eye contact with a social robot evokes. Eye contact was chosen as the topic of the study for two major reasons. First, previous results have shown that certain emotional and attention-related physiological responses are stronger when people see the gaze of another person directed to them compared to seeing their averted gaze. Second, directing the gaze either towards or away from another person is a type of behaviour related to normal interaction that even current social robots are quite naturally capable of.

In the study, the research participants were face to face with another person or a humanoid robot. The person and the robot looked either directly at the participant and made eye contact or averted their gaze. At the same time, the participants’ skin conductance, which reflects the activity of the autonomous nervous systems, the electrical activity of the cheek muscle reflecting positive affective reactions, and heart rate deceleration, which indicates the orienting of attention, were measured. The results showed that all the above-mentioned physiological reactions were stronger in the case of eye contact compared to averted gaze when shared with both another person and a humanoid robot. Eye contact with the robot and another human focused the participants’ attention, raised their level of arousal and elicited a positive emotional response.

“Our results indicate that the non-linguistic, interaction-regulating cues of social robots can affect humans in the same way as similar cues presented by other people. Interestingly, we respond to signals that have evolved over the course of evolution to regulate human interaction even when these signals are transmitted by robots. Such evidence allows us to anticipate that as robot technology develops, our interaction with the social robots of the future may be surprisingly seamless,” says doctoral researcher Helena Kiilavuori.

“The results were quite astonishing for us, too, because our previous results have shown that eye contact only elicits the reactions we perceived in this study when the participants know that another person is actually seeing them. For example, in a video conference, eye contact with the person on the screen does not cause these reactions if the participant knows that his or her own camera is off, and the other person is unable to see him or her. The fact that eye contact with a robot produces such reactions indicates that even though we know the robot is a lifeless machine, we treat it instinctively as if it could see us. As if it had a mind which looked at us,” says Professor of Psychology Jari Hietanen, director of the project.

The study was supported by the Pirkanmaa Regional Fund of the Finnish Cultural Foundation and the Academy of Finland.