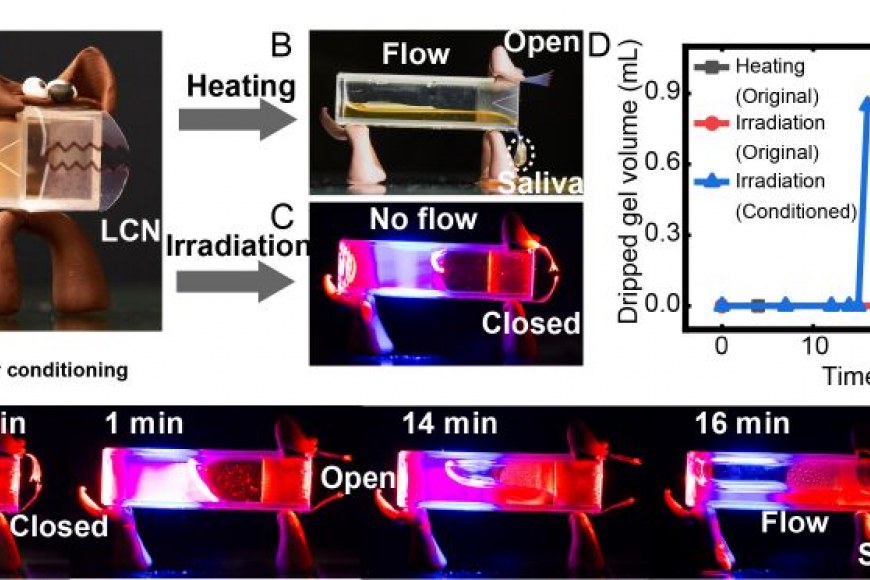 After being conditioned, the “dog” opened its mouth and started drooling.
Researchers at Tampere University and Aalto University are employing light and heat to teach materials new tricks. Materials can also be made to “forget” what they have learned.

Two new studies demonstrate that the psychological concept of conditioning also applies to materials, albeit in a simplified form. One of the studies was recently published in Nature Communications and the other in Matter.

In the first experiment, the researchers used a stimuli-responsive gel whose properties differ from regular gels we may encounter in our everyday lives. The gel was doped with a light-responsive substance and tiny gold nanoparticles, which self-assemble into chains in specific circumstances. The nanoparticle self-assembly allowed the material to “learn” to behave in new ways. Actual conditioning was achieved using light and heat: the researchers heated the gel while exposing it to a particular wavelength of light. The gel had shown no response to light before conditioning. However, when the researchers allowed the gel to solidify and again exposed it to the same wavelength of light without heating it, the gel melted spontaneously. The gel had thus “learned” to respond to a new stimulus, light.

“We made the dog’s lips to move by following the same process that evoked the gel to turn to liquid: the material was conditioned using light and heat. When we shined a particular wavelength of light on the dog, it opened its mouth and started “drooling” as the liquid gel flowed out of its mouth,” Professor Arri Priimägi says.

Materials can independently relearn something they have forgotten

The process works both ways: the material could also be made to forget what it had learned. Forgetting occurs when the nanoparticle chains are broken up by adjusting the pH of the gel.

“We also demonstrated that if a material has learned something that it later forgets, it may “remember” it over time without the presence of the original stimulus. This is because the pH of the gel can be controlled with the help of coupled chemical reactions,” Priimägi says.

Indeed, the recovery of the forgotten response occurred without any input from the researchers. Similarly to people with amnesia who may gradually recover their lost memories, the gel slowly began to remember what it had learned and then forgotten. The speed of recovery can be controlled by adjusting the external conditions. Herein the recovery took 20 hours.

In the second study, the researchers demonstrated that the same principle applies to small and soft polymer-based grippers, which they taught to only take hold of objects of a certain colour. They also used conditioning to teach a light-controlled robot to move; a polymer-based material was first conditioned using light and heat and afterwards light alone was enough to elicit the desired movement.

“We have been studying light-controlled robots in Tampere for a few years. Conditioning has allowed us to teach them new tricks, such as colour recognition and moving in conditions they are originally indifferent to,” Priimägi says.

What makes this area of research particularly intriguing is the fact that it brings together fundamental research in materials chemistry and concepts from psychology.

“We started by pondering how the concept of learning could be applied to materials, so the original idea was inspired by psychology. We managed to combine physical and chemical processes in a new way to evoke a conditioned response in our materials,” Priimägi describes.

Priimägi highlights the key role that Olli Ikkala, professor at Aalto University, had in the project.

“We teamed up to perform the experimental part of the study, but the original idea to apply a psychological approach to the behaviour of artificial materials was his,” Priimägi says.

No major delay between two stimuli

“The interval between the two stimuli is crucial. If the bell rings immediately before or during feeding time, dogs learn to associate the sound with the delivery of food. If the interval between the presentation of the neutral stimulus and the delivery of the unconditioned stimulus is lengthened, creating the association will take longer or conditioning will fail altogether. Our materials behaved exactly the same way,” Primägi says.

Pavlov opted for a bell as the neutral stimulus but it could have been anything, such as a different sound or a specific movement. The two stimuli – food and the sound of a bell – are unrelated.

“Our case is slightly less straightforward. The two stimuli we used, namely light and heat, are not unrelated because light produces heat. We were able to demonstrate that conditioning can be achieved using different wavelengths of light, which in a simple sense corresponds to a change of stimulus. Still, the analogy to Pavlov’s original experiment holds, although only within certain limitations and under specific conditions,” Priimägi says.

The researchers are planning to carry out further research to investigate whether it will be possible to condition materials using fully unrelated stimuli, for example, by replacing heat with some other stimulus.

“This is an interesting question. As functional materials are sensitive to a range of stimuli besides light and heat – such as electric and magnetic fields, changes in moisture and different chemicals – there are numerous options for the further application of this concept. The material must also include some type of memory element, which in the gel experiment was the self-assembly of gold nanoparticles and in the light-controlled robot experiment the light-sensitive molecules that diffused into the material during conditioning,” Priimägi points out.

The discovery has the potential to open up new avenues for research on materials engineering. Among other things, it may be possible to create novel coatings that are capable of adjusting their properties, such as colour, in response to different circumstances.

“Our concept of learning can also be applied to other areas, although at the moment conditioning can only be achieved through interaction between light and heat,” Priimägi says.

Link to the article