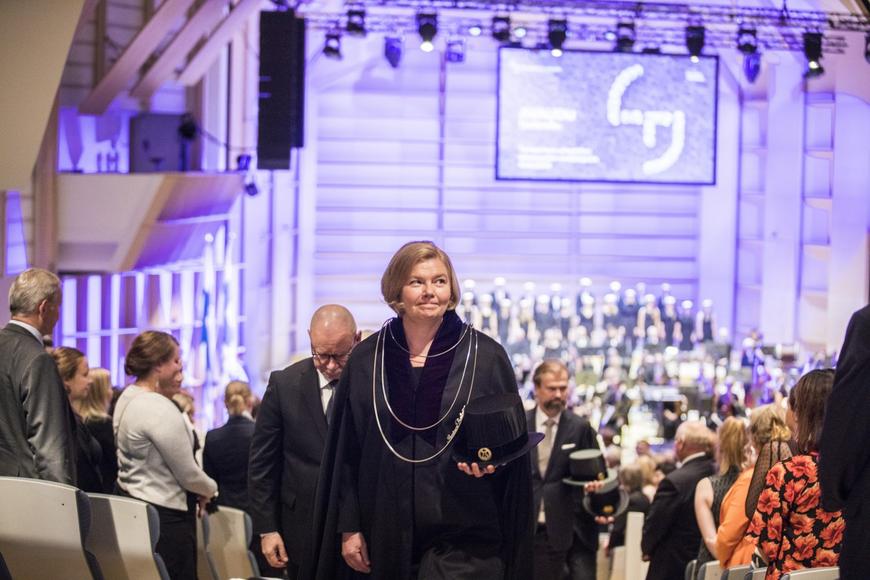 The new Tampere University celebrated the opening of its first academic year on 10 September 2019. In addition to President Mari Walls, greetings were delivered at the opening ceremony by Minister of Science and Culture Hanna Kosonen and speeches given by Honorary Doctor and children's author Linda Liukas, CEO of Sulapac Ltd and winner of the University’s first Alumna of the Year Award Suvi Haimi and Chair of the student union TREY Paula Sajaniemi.

The opening of the first academic year at Tampere University was festively celebrated at Tampere Hall.  In her opening address, President Mari Walls highlighted the important role of universities in promoting the renewal of society. Tampere University is the youngest university in Finland and Europe. The strengths of its two predecessors provide a solid foundation for the University to further increase its impact. Walls thanked all staff, students and the entire community for their groundbreaking work and commitment throughout the merger process and emphasised the importance of fostering a sense of community to facilitate day-to-day activities within our community and pave the way for the University’s continued success.

“Tampere University begins its journey in an era of global turmoil marked not only by climate change and demographic challenges but also economic and political turbulence and the polarisation of information sharing and attitudes. This time calls for universities to forge strong new paths for societal renewal. To address great global challenges, we need knowledge that is based on in-depth research, novel combinations of expertise, and broad-ranging collaboration with stakeholders in Finland and across the globe,” Mari Walls said in her speech.

“The strengths and significant achievements of our two predecessors provide a solid foundation for our young University to further increase its impact. Our strong legacy obligates us to look forward to a future where the union of scientific knowledge, education and collaboration is an unrivalled force for progress. The two former universities provided Tampere University with a valuable dowry: their close ties with a broad range of stakeholders and collaborative partners. We are committed to strengthening and fostering these relationships and forging new ones,” Mari Walls said.

The establishment of the new Tampere University and higher education community is the most important higher education reform project in Finland since the national university reform in 2010. According to Walls, the key to a successful university merger is to build a culture of trust and openness and foster a strong sense a community and inclusion to create a positive campus atmosphere, encourage creativity and scientific courage and enhance the University’s success.

In her speech, Walls stated that having a predictable research and innovation policy – and subsequent budget predictability – that extends beyond a single parliamentary term is the most important operational requirement for universities

“An increase in the level of core funding will pave the way for the renewal of universities and the strengthening of expertise. For universities to maintain their potential for renewal, it is essential that the pledges included in the Government Programme are translated into concrete financing decisions in next year's government budget.”

“One of the key success factors for Tampere Universities is having a single and united higher education community that has the potential to be more than the sum of its parts. This opportunity should not go wasted”, Minister Kosonen pointed out.

“It is important to foster a true sense of community. TREY’s vision is for all the members of our university community to be proud of our University and having a sense of belonging on campus.

“What is new is always a mystery”

Linda Liukas, author and illustrator of Hello Ruby, led the audience into reminiscing about their childhood and how mysteries appear to children; that feeling of mystery associated with what is new also continues into adulthood.

“The start of something new is always a mystery, and achieving an understanding of new things always requires multiple perspectives. Here the University and the entire higher education community play an important role, because you can look at things from different perspectives,” Liukas said.

“I wish three things for the new higher education community: human-centredness, the courage to build entire stories from a set of facts, and persistence. Universities are among the few that have a veritable mandate to look beyond the here and now and set their sights on the future,” Liukas said.

Suvi Haimi wins the first Alumna of the Year Award

The winner of Tampere University’s first Alumnus/a of the Year Award was announced at the opening ceremony. The winner is Suvi Haimi who holds a PhD in Biomedical Materials. Haimi is the CEO and Co-Founder of Sulapac Ltd, which develops microplastic-free and fully biodegradable packaging materials, for example, for the food and cosmetics industries.  Haimi embodies Tampere University’s mission to deliver impact for society. She received the award in recognition for her important and ground-breaking work and for her contributions in promoting the University's impact. The innovative packaging developed by Sulapac to replace plastic has attracted millions of euros of investment and received numerous awards and accolades.

“How are you going to change the world today? This is what we ask ourselves every day. Students, you are swimming in a sea of opportunity! Do not let little things get you down but find motivation from the chance to make your mark in the world,” Haimi encouraged students in her speech.

The opening week of Tampere Universities is full of events and activities. The full programme of the opening week is available online at https://events.tuni.fi/openingweek2019/

Inquiries about the Alumna of the Year: Minna Puntila, Tampere University, tel. 040 8490503, minna.puntila [at] tuni.fi