Nurses do not want exoskeleton vests to turn them into robots 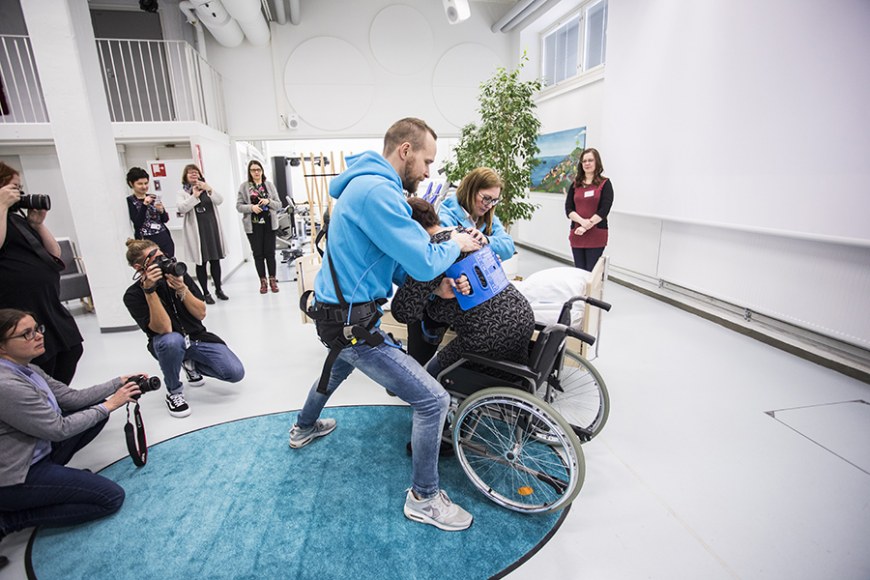 An exoskeleton vest was used in a study where nurses assisted patients from the hospital bed to a wheelchair. The photograph is from the press event preceding the studies.
Nurses may accept exoskeleton vests more easily if they facilitate work and are comfortable to wear. However, nurses also fear that patients might find them robot-like.

In ground-breaking studies led by researchers at Tampere University, exoskeleton vests were worn by nurses in order to discover how new technology would suit the special requirements of patient work. The globally first research article on the acceptance of exoskeletons in health care work was recently published in the Ergonomics in Design: The Quarterly of Human Factors Applications journal.

The article authored by researchers from Tampere University and LUT University presents findings from two studies with users of the Laevo Exoskeleton wearable back support vest, which according to the manufacturer relieves lower back strain by 40–50%

In the first study (S1), 16 nursing students, half of whom already had experience in nursing, participated in the task of assisting a geriatric patient from a hospital bed into a wheelchair. The experiment was done in pairs so that the nurses first worked without the exoskeleton vest and in the second phase, one of the nurses wore the vest while in the third phase, both nurses wore the vest.

In the second study (S2), 7 nurses tested the exoskeleton vest in a real care environment for approximately a week. The nurses were interviewed before and after the trial period.

Strain lessened but the vest did not fit all

In the S1 experiment, most of the nurses reported that the exoskeleton vest reduced lower back strain when they assisted patients. However, only half of them said that they would use the vest in their work.

Willingness to use the vest in the future was related to its perceived usefulness, especially if it had a positive effect on performance and ergonomics. The pleasantness of use was also considered important.

In both studies, several nurses complained about poor fit. They felt that wearing the vest made them stiffer and unable to react to sudden situations as well as they could without it.

Some reported that if the vest were smaller or softer, it would make daily use more comfortable. According to the participants, it would be important for the exoskeleton vest to be easier and quicker to put on because of the hectic nature of care work.

The nurses shared the view that if the vest were smaller, it would be possible to wear it underneath work clothes unnoticed by patients.

Inconspicuousness would be important for occupational safety because patients may be prone to grab any devices they see. Especially in the care of dementia patients, it is usual that patients grab the nurse and the exoskeleton vest might even look like something the patients should grasp or lean on.

The nurses were also concerned that the vest might make them look like robots in the eyes of the patients, possibly jeopardizing the delicate interaction and trust between the carer and the patient.

Some nurses found the use of the exoskeleton vest distressing and felt that this made the vest less trustworthy and safe. However, trust did not appear to affect the desire to use the vest in the future. In interviews with the participants, reliability was often mentioned. However according to the researchers, trust toward technology is not only about the characteristics of technology but also include personal characteristics related to its use.

In the interviews prior to the experiments, several nurses expected that the use of exoskeleton vests would arouse interest and curiosity in the patients and their families. Some thought the vest could cause aversion especially if the nurses themselves expressed negative attitudes towards it or were unable to answer questions about it. However, some suspected that the vest would not attract the attention of patients, especially dementia patients.

These predictions were quite accurate in the findings, but the patients also commented how the nurse and the exoskeleton vest “blended into each other”, forming some sort of a robot. Nurses in S2 did not expect this, but the feedback from patients corresponded to what the nurses in S1 feared the most: they did not want to look like robots.

Nurses in S2 reported that the patients had described the exoskeleton vests quite negatively, for example, they had called the device “a mess”. The reason for this may be that when the nurses wore the exoskeleton, their appearance came across as clumsy and awkward. The interview after the experiment also revealed that the patients showed compassion towards the nurses who “had to” use the vest.

Some nurses expected that during the experiment, some colleagues would find the vest ridiculous while others would be willing to try it on. While the post-interviews supported these presumptions, the nurses also said that their colleagues questioned the weight and comfortableness of the vest.

However, in the post-interviews, the nurses reported that they were motivated to use the vest primarily because it improves ergonomics and that the expected health benefits were more important than the disadvantages.

As a result of the trials, the nurses did not believe there would be a lot of opposition among their colleagues or patients towards using the exoskeleton vests. This was rationalised by the fact that most negativity was aimed at the vest itself, such as its appearance and ergonomics, not at the nurses wearing it.

Ergonomics and user-friendliness decide the future of exoskeletons

The researchers estimate that the best way to improve the usefulness of new technology is to invest in better ergonomics and user-friendliness.

Anxiety about utilising an exoskeleton can be reduced by making the devices safer and more reliable even in demanding and busy work situations.

Because the study by the researchers at Tampere University was the first of its kind, a technology acceptance model for exoskeletons does not exist yet. However, these results give initial evidence for modelling exoskeleton acceptance.

The Technology-mediated care and touch (TEHOKO) project is affiliated with the Strategic Research Council-funded research project Robots and the Future of Welfare Services.