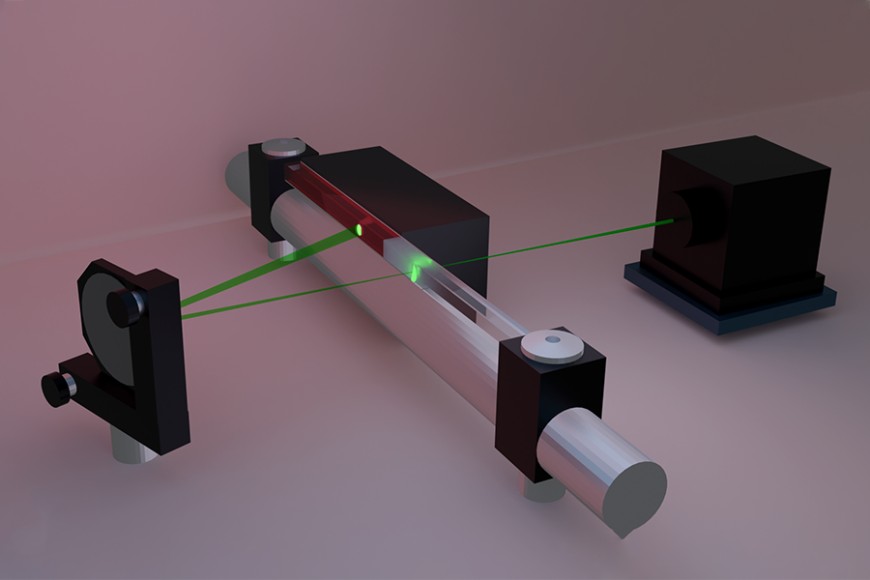 The light-driven feedback loop in life-inspired hydrogels. The system developed by researchers regulates its own temperature in response to environmental disturbances. Photo: Olli Ikkala’s (Aalto University) and Arri Priimägi’s (Tampere University) research groups.
Researchers at Tampere and Aalto University have developed a synthetic system that responds to environmental changes in the same way as living organisms, using a feedback loop to maintain its internal conditions. This not only keeps the material’s conditions stable but also makes it possible to build mechanisms that react dynamically to their environment, an important trait for interactive materials and soft robotics.

Living systems, from individual cells up to organisms, use feedback systems to maintain their conditions. For example, we sweat to cool down when we’re too warm, and a variety of systems work to keep our blood pressure and chemistry in the right range. These homeostatic systems make living organisms robust by enabling them to cope with changes in their environment. While feedback is important in some artificial systems, such as thermostats, they don’t have the dynamic adaptability or robustness of homeostatic living systems.

Now, researchers at Tampere University and Aalto University have developed a system of materials that maintains its state in a manner similar to living systems. The new system consists of two side-by-side gels with different properties. Interactions between the gels make the system respond homeostatically to environmental changes, to keep its temperature within a narrow range when stimulated by a laser.

The article Feedback controlled hydrogels with homeostatic oscillations and dissipative signal transduction was published in Nature Nanotechnology on 28 November, 2022.

“The tissues of living organisms are typically soft, elastic and deformable,” says Hang Zhang, an Academy of Finland postdoctoral researcher at Aalto who was one of the lead authors of the study.

“The gels used in our system are similar. They are soft polymers swollen in water, and they can provide a fascinating variety of responses upon environmental stimuli.”

“Like a living system, our homeostatic system is dynamic. The temperature oscillates around the threshold, but the range of the oscillation is pretty small and is robust to outside disturbances. It’s a robust homeostatic system,” says Hao Zeng, an Academy of Finland research fellow at Tampere University who was the other lead author of the study.

The researchers built touch-responsive triggers on top of the feedback system. To accomplish this, they added mechanical components that respond to changes in temperature. Touching the gel system in the right way pushes it out of its steady state, and the resulting change in temperature causes the mechanical component to deform. Afterwards, everything returns to its original condition.

The team designed two systems that respond to different types of touch. In one case, a single touch triggers the response, just as a touch-me-not plant folds its leaves when stroked. The second setup only responds to repeated touches, in the same way as a Venus flytrap needs to be touched twice in 30 seconds to make it snap shut.

“We can trigger a snapping behaviour with mechanical touches at suitable intervals, just like a Venus flytrap. Our artificial material system can discriminate between low-frequency and high-frequency touches,” explains Professor Arri Priimägi of Tampere University.

The researchers also showed how the homeostatic system could control a dynamic colour display or even push cargo along its body. They emphasize that these demonstrations showcase only a handful of the possibilities opened by the new material concept.

“Life-inspired materials offer a new paradigm for dynamic and adaptive materials which will likely attract researchers for years to come,” says Professor Olli Ikkala of Aalto University. “Carefully designed systems that mimic some of the basic behaviours of living systems will pave the way for truly smart materials and interactive soft robotics.”