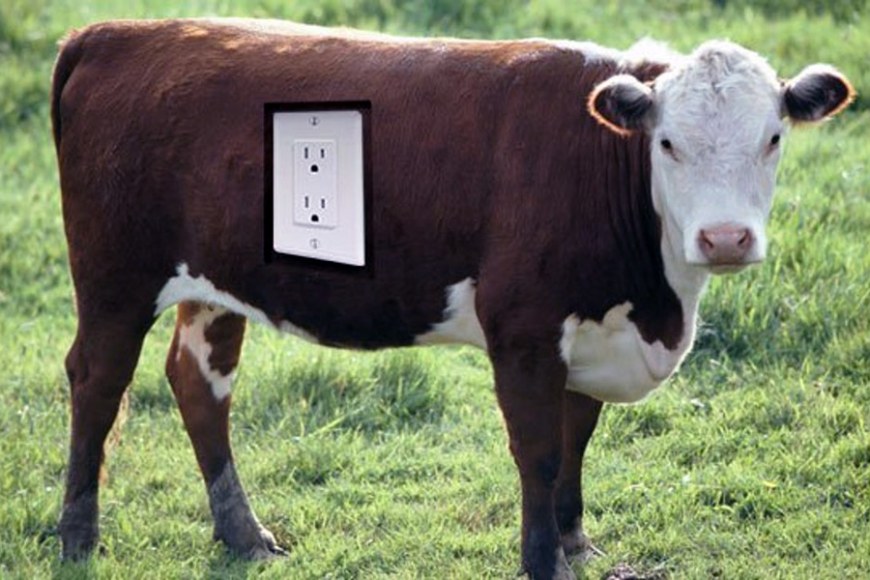 Electrical energy can be captured from the movement of animals through a process known as energy harvesting. Next spring David Blažević will be testing his sensors on cows at the Ahlman farm in Tampere and the Viikki research farm in Helsinki.
Goats are corralled without fixed fences and cows generate electricity with the help of technology now studied at Tampere University.

Energy harvesting, the conversion of ambient energy into electrical energy, is now commonly used in industrial settings to power standalone electronic systems in hard-to-reach locations where conventional batteries and cables cannot be used. Marie Curie Research Fellow David Blažević is studying how to harness animal motion to generate electricity. The results could not only benefit mischievous goats but also help increase biological diversity.

When David Blažević took a short break from his research career to work on a friend’s farm in his native Croatia, he became intrigued with the potential of energy harvesting technologies for precision livestock farming, or more specifically the generation of electricity from the movement of animals to supply power, for example, to collar-mounted devices that track grazing livestock. Cut to the present day, and we see Blažević, postdoctoral researcher working under a Marie Curie grant, building prototypes of animal-attached accelerometers on the Hervanta campus of Tampere University.

“I am still weighing the options for collecting motion capture data from animals, but what I need is a small device that can be mounted on a collar or attached to a leg. The Fablab on the Hervanta campus offers a full suite of equipment for building my prototypes,” Blažević says.

Electrical energy can be captured from the movement of animals through a process known as energy harvesting.

“The technology allows the generation of electricity almost out of nowhere, such as mechanical vibration, friction and temperature differences. Studies have been conducted on human subjects and, for example, energy has been harvested from people walking. However, to date there has been limited research examining energy harvesting from the movement of animals,” David Blažević points out.

“Virtual fences would come especially handy for goat owners. Agile goats are notorious escape artists and may be difficult to control in a terrain that is challenging for a human shepherd,” says David Blažević based on his experiences in his native Croatia. The picture is taken at the goat farm Drijade, in Šumber, Croatia. Blažević was a goat herder there with his family.

Inside a virtual fence

Blažević’s research topic may sound exotic but is in fact a subject of intense interest among practitioners of precision livestock farming (PLF), which refers to the use of advanced technologies to optimise the stages of livestock production. The PLF market is growing rapidly, with new companies popping up everywhere.

“One interesting form of PLF is virtual fencing. It is an animal-friendly system for corralling free-ranging livestock in a designated area of pasture without fixed fences. The animals are fitted with a collar-mounted GPS device that sends them a signal – audio or vibration cues or a mild electric shock – when they are approaching the virtual boundary. This teaches the animals to stay within the prescribed area,” Blažević explains.

Virtual fencing has the potential to improve the flexibility of pasture allocation and prevent overgrazing, resulting in increased biodiversity. It can also be used to prevent livestock from wandering into vineyards or olive groves. Virtual fences would greatly benefit farmers whose cattle graze on vast grasslands, such as in Australia and South America.

“From my personal experience, I can say that virtual fences would come especially handy for goat owners, because agile goats are notorious escape artists. A virtual fence would give goats the chance to do their own thing in a terrain that would be challenging for a human shepherd,” Blažević laughs, reminiscing about his experiences in Croatia.

The technology could also be used to collect data on the health of livestock or control feed intake inside a barn.

The sensors attached to the animal can keep track of more than 400 parameters, such as temperature, gastric and salivary pH levels, behaviour and nutrition. They also enable the owner to monitor the well-being of the animals. The early identification and isolation of sick animals helps prevent the spread of animal diseases.

Commercial innovation on the horizon

A range of collar-mounted GPS devices are already available on the market, but the downside is that they run on batteries. As batteries are difficult to recycle, they can have a negative impact on the environment. No batteries will be needed if the devices are able to harvest their energy from the movement of the animals.

“My goal is to create a small, affordable, robust and generally applicable device for harvesting energy.”

This spring David Blažević can be spotted at the Ahlman farm in Tampere and the Viikki research farm in Helsinki where he will be testing a range of different sensors on cows. He is also exploring opportunities for collaboration with Croatian partners and the Goat Association of Finland pertaining to the study of the movement of goats.