Game of drones – autonomous cooperation in the sky 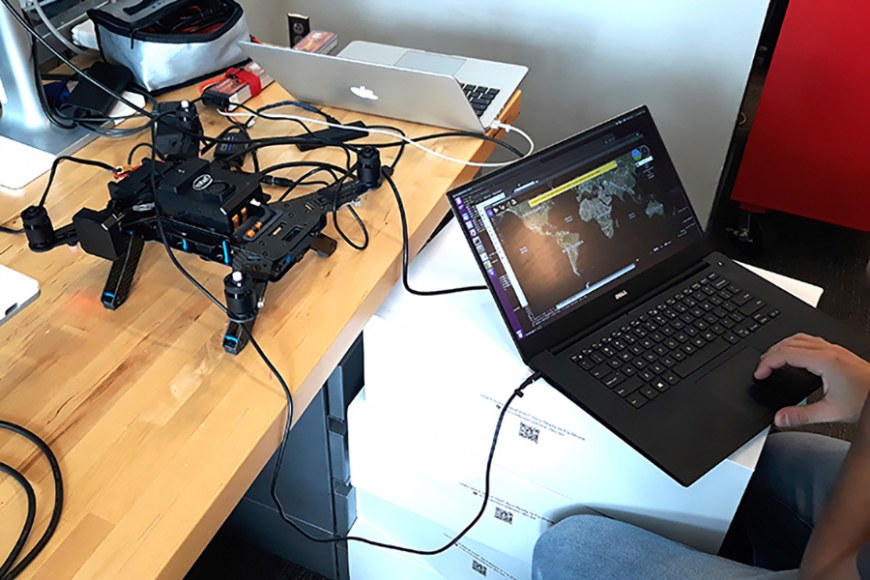 The researchers teach the drones to work together.
Drones are far more than small video-shooting flyers hovering above the parks or classified military weapons used by the world’s most powerful nations. To an increasing extent, we will see drones in everyday utility tasks, such as infrastructure maintenance, logistics, agriculture, surveillance, and entertainment. Researchers from Tampere University are members of the US-based Intel Science & Technology Center on Wireless Autonomous Systems that aims to facilitate direct communication between drones.

The mass deployment of drones, or unmanned aerial vehicles, is literally about to take off. According to recent reports in the field, there may be a hundred billion dollar market for drones in 2020.

For a long while now, drones have been in high demand for military use where they offer a competitive alternative to manned aircrafts. Today though, the steepest growth is observed elsewhere.

While consumers have been keen on using drones for photography and hobbyist applications, and their popularity keeps rising, the highest acceleration is expected in business and administrative services. In these fields, the use of drones is still in its infancy, but the potential is virtually unlimited: drones can be employed for countless purposes from entertainment to wildfire suppression and from agriculture to building construction.

”Example drone-aided applications range from conducting aerial medical delivery in Rwanda to running autonomous aerial taxi service in Dubai. Drones can also serve as small radio cells to be deployed at disaster scenes or during spontaneous public events on demand. Leading global companies, such as Amazon, are seeking the best leverage of their drone fleets, far beyond delivery services,” says Tenure Track Professor Sergey Andreev from the Faculty of Information Technology and Communication Sciences at Tampere University.

In Finland, trials have been conducted on drone-based food delivery, as an example, but drone-powered services have not become established massively as of yet. However, this may soon change.

”The US Federal Aviation Administration, FAA, predicted in its forecast that there will be about 7 million drones in the air by 2020. FAA also expects these numbers to rise quickly, while the commercial drone sales alone are nearly reaching 2.7 million items. To put that number into perspective, it is estimated that there are between 23,600 and 39,000 conventional airplanes in the world today,” Andreev notes.

A swarm of drones working together

If even a single drone can be employed for multiple purposes, what could they achieve when working together in connected and collaborative swarms?

Even now, drones are able to coordinate with each other by using a GPS system or different types of cameras, but such interaction remains rather limited and slow. Researchers from the University of Pennsylvania have managed to teach their drones fly in formation using a single downward-facing camera.

”This is a major step forward, but in order to tap into genuinely flexible and reliable aerial applications, multiple drones will have to be able to communicate with each other directly,” Sergey Andreev explains. ”We need novel radio communications technologies, which will allow drones to talk to each other and collaboratively solve tasks that are impossible for a single drone.”

The future potential of swarm robotics is immense and spans a breadth of applications from autonomous surveillance and disaster relief to collaborative construction and environmental monitoring.

The Faculty of Information Technology and Communication Sciences at Tampere University is home to communications technology expertise that may help drones improve their cooperation. Sergey Andreev is with the Electrical Engineering Unit led by Professor Mikko Valkama, which was invited to join Intel Science & Technology Center (ISTC) on Wireless Autonomous Systems (WAS) last year. Other members of that center originally established by Intel Corporation, US feature researchers from the University of Pennsylvania, Massachusetts Institute of Technology (MIT), and Cornell University – the cream of the crop in the academic field.

”We have been collaborating with ISTC on WAS for quite some time now, but it was great to finally be invited as the only non-US-based member. The research on intelligent aerial vehicles that we conduct here, at Tampere University, has been recognized as an important component within the target scope. We have focused expertise in drone-aided communications technology that is essential for this project to permit the drones to communicate with each other with sufficient speed and reliability,” Andreev says.

Professor Andreev is hoping to grow the research team addressing this topic. In collaboration with the group of Professor Alejandro Ribeiro in the University of Pennsylvania, they have recently submitted a joint project proposal. The broader activity in this area is already supported by the Academy of Finland and Business Finland.

”The effort behind this project remains small, but we are continuously seeking further collaborations to expand it. We have the skills, enthusiasm, expertise, and devotion, but we may still lack resources.”

There were also discussions with Pauli Kuosmanen, Director for Cooperation and Partnerships in Tampere University, about a possibility to transform this initiative into a larger research center subject to interest and participation of industrial companies. Finland is an exceptionally favourable place for drone-centric research, as the legislation regulating autonomous aerial vehicles is relatively liberal.

”The topic is extremely hot for both academia and industry. We are hoping that diverse companies will be able to benefit from our expertise and research contributions here in Finland! This technology could ultimately lay the foundation for renewed economic growth,” Andreev concludes.