"Dead" receptors are alive and dynamic 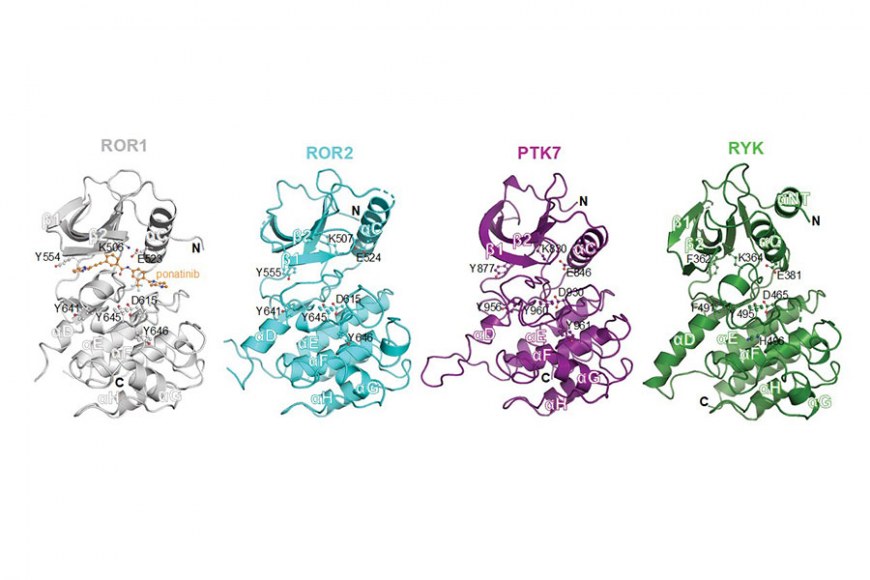 New study of receptor tyrosine kinases introduces a new scientific discovery for cancer research. The results of the research conducted in Tampere University, Yale University and Goethe University have been published in a high impact factor journal Molecular Cell.

One fundamental question is how receptor pseudokinases can signal in the absence of catalytic activity? A group of four receptors: receptor tyrosine kinase orphan-like receptor ROR1 and ROR2, protein tyrosine kinase 7 (PTK7; also known as colon carcinoma kinase (CCK4)) and receptor-like tyrosine kinase (RYK), which are all categorized as pseudokinases, are co-receptors in WNT signalling pathways. Collectively, these pseudokinase receptors have been implicated in the pathology of several cancers and developmental disorders.

“We found that receptor tyrosine kinases can signal through the intracellular ‘‘pseudokinase’’ domains. Our teams were surprised to see that the pseudokinase domains of Wnt-receptors are somewhat dynamic and mimic the conformational changes seen in their active counterparts, such as insulin receptor kinase,” says docent Daniela Ungureanu from Tampere University’s Faculty of Medicine and Health Technology.

“Another exciting and unexpected finding of this study was the notion that a protein with no catalytic activity and no ability to bind nucleotides required for catalysis is still able to bind small molecule inhibitors that could modulate its downstream signaling,” Ungureanu continues.

Compared with active kinases, however, pseudokinases pose a much greater challenge for drug design due to their structural alteration in the nucleotide-binding site. Therefore, molecules that could force pseudokinases to adopt another, non-functional conformation could be used for therapeutic targeting.

Binding of ponatinib to ROR1 opens a new avenue for developing more specific inhibitors for this receptor pseudokinase, to facilitate its efficient targeting for therapeutic purposes, specially cancers where ROR1 is highly expressed.