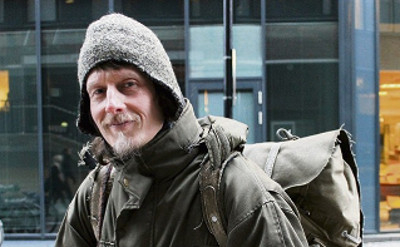 The deviant nature of self-sufficiency is also irritating because it appears to challenge the morals of people. Although Nordlund never raises himself on a pedestal nor even encourages others to follow suit, readers feel they are being challenged. Perhaps, we could all take a moment to reflect where this resentment comes from.

Many dream of financial self-sufficiency, but only few are prepared to go as far as Lasse Nordlund. In the early 1990s, Nordlund began an experiment living as self-sufficiently as possible. Eventually, he was able to sustain himself and his family with a budget of mere 30 to 50 euros per year, living in a small town in North Karelia, located in Eastern Finland, growing and preparing everything else from scratch, all by himself.

Nordlund is exceptional due to the depth of his experiment. What is also exceptional are the swarm of comments on the 2008 Helsingin Sanomat article covering the self-sufficient practices of Nordlund and his family. In little over a week, the article gathered 451 comments. A civic debate on radical self-sufficiency larger than this is hard to come by.

Nordlund saved these comments for later research. Our study based on this material was published in the Kulttuurintutkimus journal in 2017. Herranen has also popularized the results of this study.

Our article delved into the comments, and we extracted what we may here call common sense. Common sense refers to our every-day perception of the world that is based on experience and practice. What makes common sense interesting is how things beyond our perception, such as the possibilities of politics, are assessed in comparison to how the world appears to us as we now see it. Regardless of whether we have any actual, direct access to most events, we are still very much eager to have our say on them.

Common sense often appears to us as our own private reasoning, although it is very much a common form of reasoning: our perception of the world is not formed in a vacuum, but rather, reasoning that appears to be private is in fact part of a larger, prevailing general understanding. Therefore, the material depicting common sense reveals various common forms of reasoning.

The Nordlund case is interesting for how foreign his way of life is to our common sense. Commentators had difficulty accepting something that was so distant from their own world of experience and were suspicious of his lifestyle. People found it difficult to believe that someone could possibly live entirely outside our monetary economy and structured society.

In our article, we discussed how money has such a central role in people’s lives that it offers the easiest way to bridge understanding of things beyond our immediate world of experience. The possibility of living so radically outside the norm was typically a simple question of what the cost is and who pays for what. Money clearly provides the easiest way to understand unfamiliar things and relations between people—who owes what to whom. Considering that money is, in fact, based on agreement, these statements are rather astonishing—as though human life could not exist without monetary transactions.

Our research focused on how commentators expressed moral valuations of Nordlund’s lifestyle. Their reactions were generally between very positive and very negative. Only those who reacted very positively believed such a lifestyle was even possible to begin with. It was more common for people to be mildly or strongly suspicious of the truthfulness of his story.

Here, we will present a part of the material that was not examined in the actual study. It still offers an interesting piece to analyze because it provides new insights into the discussion on self-sufficiency and how far from the actual topic we can derail once excited, but nonetheless, connect the discussion reaching way up to outer space all the way back to the North Karelian self-sufficient way of life.

Children and the spoon-fed society

Compared to present-day standards, Nordlund and his family live in relatively primitive conditions as described by Helsingin Sanomat. Many commentators are particularly irate that the family children must make the same choice as their parents, which is, to live a relatively self-sufficient life. This was largely seen as an injustice to the children, who were thought to suffer and be brainwashed (e.g. eikka, 20.12.; millamagia, 20.12.) [1].

However, not all agreed. SummerHill (20.12.) turns this around and comments: “As for urban families, we could ask the same question.” The conversation moves on to discuss the extent of the parents’ responsibility to decide for their child and what is deemed normal. For many, a lifestyle choice that differs from the imagined standard is seen as something children are forced to. Meanwhile, an unspecified, average way of life is held normal and needs no explanations.

This is a good example of what we call common sense: a way of life that we sense in our immediate sphere of life, that we ourselves are living, is normal and natural. Everything else is perceived as something children should be protected from.

To no surprise, an article about self-sufficiency also garners thoughts about our current state of the world and system in which we are living. Here, reactions were split in two. Some emphasized how limited our planet and economic growth are (Ajattelija_XB, 20.12) and argued that “if everyone lived like Finns during their Christmas shopping frenzy, not even two planets would be enough” (Kaupunkilainen, 20.12.). Meanwhile, others called people coach-slouching freeloaders (Ekhnaton 20.12.) and more generally a spoiled, spoon-fed society (Tiikerililja, 20.12.). Some were concerned of the decline in manual skills (Hieno elämäntapa, 20.12.) and thought urban citizens lived in a vicious cycle (ekotekoja, 20.12.).

Nordlund offers a mirror where people see their reflection that reveals their societal and private problems. Regardless of how truthful people see Nordlund’s story, it serves as a basis for people to ruminate on the problems they see on a general or individual level. In this case, especially environmental issues in connection with our lives we perceive as normal are something to think about as much as the decline in manual skills and general activity.

Migration and the promise of self-sufficiency

The current immigration issue garnering plenty of exposure is a prime example of how burning topics are connected to a phenomenon outside common sense. Self-sufficiency is seen to buffer immigration: “A good thing here [in self-sufficiency] would be that the stampede of ‘refugees’ would end in a week just like that.” (rähmis, 20.12.)

This idea by rähmis is repeated with fairly similar reasons: “The country would not have any refugees, if the conditions here were worse than in their country of origin.” (yksityisajattelija, 20.12.); “The arrival of refugees would end in an instant if they had to carry water, chop wood or plough through snow.” (Ekhnaton, 20.12.); “[If everyone lived like this], the in-coming refugees would have to support ’emselves! there ain’t no counter to get your money!! only gotta survive like everyone else! that is, self-sufficiently!” (JOIJO. 21.12.)

On the contrary: we would need quite a lot of people from materially poor conditions with the basic skills to teach these heroic Finns how to plant seed potatoes, milk a goat, and light a fire without a lighter embellished with a picture of skimpily-clad woman on the side of it bought with fuzzy dice from the gas station. […] Small pizzerias and grocery stores owned by immigrants are all over the place—but, even though the startup allowances are the same for everyone, I haven’t seen many ultra-nationalists running any businesses?

Those who oppose immigration see self-sufficiency as a solution to the problem, but then again, they understand self-sufficiency primarily as earning a living through activity. Here, no distinctions are being made between the monetary and the resource economy. Instead, all work is done on the same terms, whether it be farming or paid work.

Those in favor of immigration see it as an opportunity. Immigrants from poorer conditions potentially have similar skills to Nordlund and therefore bring these important skills to Finland. The future uncertainties lying ahead convince people that society can no longer organize on the same terms it has up to this point. Compromises are needed, and people must learn to live with less and more self-sufficiently.

On our way to outer space

The conversation also suggests how rich the human imagination is when being provoked. Not only a tough one to chew and quick to take a moralizing stance on, the self-sufficient lifestyle so foreign to our common sense raises legions of opinions scattered into completely different spheres. People even come to ponder the chances of humanity and travelling far away as the key to survival:

If the goal is to save humanity, we are already doomed. Unless we develop, use and build space ships on which we can escape from certain doom. No matter how self-sufficient our life in small communities, we shall surely demise. This is certainly a lot to think about. (Balvenie, 25.12.)

But does even travelling to outer space help with our core problem?

Humans are herd animals. That is, we survive in this world better if we can rely on each other’s help and skills that we ourselves lack. […] Space travel hardly helps here at all! (Yksityisajattelija, 26.12.)

The ‘abnormality’ of self-sufficiency is both irritating and inspiring. Nordlund gives food for thought to consider our personal and the entire humanity’s changes of survival and its preconditions facing the challenges ahead. At the same time, the deviant nature of self-sufficiency is also irritating because it appears to challenge the morals of people. Although Nordlund never raises himself on a pedestal nor even encourages others to follow suit, readers feel they are being challenged. Perhaps, we could all take a moment to reflect where this resentment comes from.

[1] The date after the handle refers to the date in 2008 when the comment was published online.

Translation by Salli Hakola. The translator is a Master’s-level student of Multilingual Communication and Translation Studies at Tampere University. The translation was produced as part of a project course in English Translation. The article was originally published in Finnish in 2018.