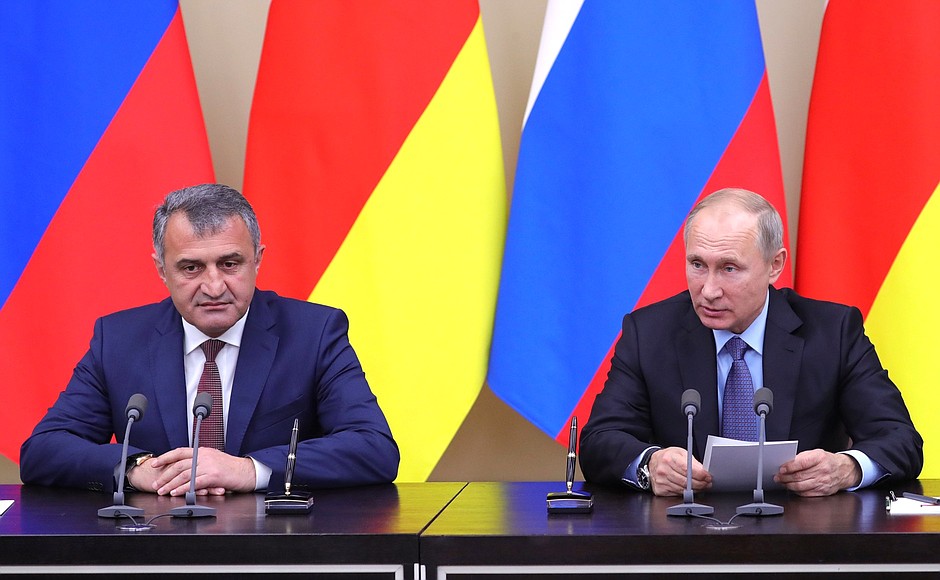 The writer is the editor of Alusta!

If you want to understand Russia, you must understand the significance of deep borders

Why does Russia intervene in the business of its historical neighbors, the former Soviet republics? Abkhazia, South Ossetia, Transnistria and Nagorno-Karabakh are familiar places, but what happens on the borders of Russia and what is happening in the background?

The conflicts in the former Soviet republics are complicated and they have a long history, says expert in Russian affairs, researcher Helena Rytövuori-Apunen from Tampere Peace Research Institute TAPRI.

The history of the conflicts in Russia’s neighboring countries stems from Stalin’s nationalities policies and beyond. According to Rytövuori-Apunen, conflicts in these areas are often interpreted by simply asking what Putin will do next and in which direction Russia will expand to, although the history of these conflicts is long and complicated.

Rytövuori-Apunen has worked as a professor of international relations at Tampere University and as a researcher at TAPRI. Her area of expertise lies in study of Russia and teaching it, Russo-EU relations, and Finland’s relations with the East. Studying borders and borderlands is central to Rytövuori-Apunen’s research. Her book Power and Conflict in Russia’s Borderlands: The Post-Soviet Geopolitics of Dispute Resolution was recently published by I.B. Tauris (Bloomsbury).

There is a recurring conception in media that Russia maintains prolonged conflicts in the areas of former Soviet republics to prevent their neighbors from westernizing. According to Rytövuori-Apunen, this conception is problematic when it comes to understanding Russia. It is based on the belief that these countries are relatively uniform political units without the influence of intervention by Russia.

In the past, before these borders became state borders after the collapse of USSR, they were just administrative borders, relatively meaningless to people, says Rytövuori-Apunen.

– This is not the case. It is about borders that were originally formed artificially. In the past, before these borders became state borders after the collapse of USSR, they were just administrative borders, relatively meaningless to people,” says Rytövuori-Apunen.

Theories of international relations often predict the evolution of crises on the basis of analogies drawn from developments in previous crises. According to Rytövuori-Apunen, this happens in the case of conflicts in Russia’s borderlands. This process homogenizes events by imposing similarity as a model. However, the process rules out alternative developments and prevents us from seeing other options, when the facts are presented as symbols and continuations of previous development.

According to Rytövuori-Apunen, the conflicts in Russia’s borderlands differ from each other. While politicians in Moscow use the conflicts in former Soviet republics to pursue their own agendas, the conflicts cannot be seen merely as a geopolitical rivalry between Russia and Western world.

– Georgia and Ukraine preparing for NATO membership was a figurative last straw for Moscow. Still, Crimea and Sevastopol are their own chapter with a long history due to the Russian naval base. Georgia with its separatist areas has been a problem for Russia for a long time because of the common conflicts in the Caucasus area that threaten the unity of Russia, says Rytövuori-Apunen.

The annexation of Crimea in 2014 increased the Kremlin’s popularity. Talks of a new Cold War begin easily, and Russia’s goals are assumed to be aggressive and expansion-oriented in principle. The assumption of Russia and Putin’s desire to expand is hasty according to Rytövuori-Apunen.

The personifying question ‘what does Putin want next’ easily leads in simplifications. In terms of international relations, it is more important to study the recurrence of practices and the opportunities within.

The personifying question ‘what does Putin want next’ easily leads to simplifications. When it comes to international politics, it is more important to study the recurrence of practices and the opportunities within.

According to Rytövuori-Apunen, the focus should be on the complex political situation in these areas and the long history of the conflicts.

The ongoing conflicts in Russia’s borderlands sparked when the USSR collapsed. The goal of Stalin’s nationalities policies was to discourage nationalism and the areas were divided with that in mind.

The result was a collection of unnatural borders, the problems of which surfaced when the USSR became Russia on the stage of international politics.

Abkhazia, South Ossetia, Transnistria and Nagorno-Karabakh are very different from each other. Still, Rytövuori-Apunen sees that their conflicts are treated as similar to each other. Some areas are ethnically uniform, some are not. Some areas want to be a part of Russia, some want to be independent. In Finland, a reason for the West versus Russia confrontation is Finland’s determination to rely heavily on the EU’s Russia politics. According to Rytövuori-Apunen, that attitude is common in Finnish discourse and its roots are in the Cold War era mindset.

– Because Finland is a member of the EU, it wants to follow EU’s normative politics. As a result, Russia is seen in principle from the point of view of shortcomings of democracy and breaking the principles of international law. Even though this critical, normative point of view is justified in itself, and it can be concluded that Russia violates human rights and the international law, that kind of thinking leaves much in the dark, says Rytövuori-Apunen.

Interpreting Russian politics in the frame of the Cold War and the normative EU policies is insufficient: the frame tells more about the interpreter than the object. The similarizing point of view bothers Rytövuori-Apunen, because in the core of international politics is coordination of differences. Evaluating the other party on the basis of one’s own needs and identity cannot be a starting point for peace and conflict research, she says.

The idea of border is often rather meaningless in the everyday life in Russia’s borderlands. That is why Helena Rytövuori-Apunen is interested in how states create, reinforce and justify deep borders. A deep border is not a line drawn in the terrain, established by agreements between states. There is much relevance in understanding deep borders, because in most parts of the world, a modern state with its borders is not an established institution.

– A deep border is a demand and an argument about the justification of presence in an area beyond state borders. Alongside the deep borders, the borders created by agreements between states can be very artificial when it comes to people’s practices and group identities. Deep borders have a historical background that is still relevant today and they are maintained by the practices of communities, and by the policies and measures taken by states.

There are multiple communities whose existence is based on connections surpassing state borders. They can be related to ethnicity, religion or livelihood. The communities challenge the authority of states by for example bypassing border control or even by starting violent rebellions.

In turn, military bases can serve as an example of the deep border policies pursued by states, if they have a historical ground that justifies or tries to justify presence outside of the linear borders between states.

In the areas of former Soviet republics, the mechanism of deep borders is different in every conflict, says Rytövuori-Apunen. For example, in the Russo-Georgian War, Russia began to defend South Ossetia, which did not want to become a part of the independent Georgia after the collapse of the USSR. South Ossetia wished to follow the model of North Ossetia.

North Ossetia is ten times larger than South Ossetia in every way. On the Russian side of the border, it is an ethnical and historical reference point for Ossetians and South Ossetia. When the USSR came into existence, the Ossetians were divided in South Ossetia and North Ossetia and attaching new areas in the Stalin era incited the conflict in Georgia. The Ossetians were an ethnically uniform group, unlike for example the Abkhazians in Abkhazia, whose identity in the area is based on geography and who sought an equal alliance with Georgia even before the formation of the USSR.

South Ossetia has looked up to North Ossetia during the whole USSR history, which was pointed out by Ossetians in Georgia when the USSR was about to collapse.

– Naturally, it collided with the nationalist policies that were meant to unify Georgia, which caused a violent conflict in the early 1990’s, says Rytövuori-Apunen.

A deep border is therefore not definable in the same way as are the borderlines between states. According to Rytövuori-Apunen, deep borders offer a perspective which in the research of Russia shows how superficial the understanding of the country remains if, for example, sovereignty is seen primarily as a synonym of controlling an area marked by linear state borders and their integrity.

–Sure, Russia annexed Crimea and Sevastopol but if we settle for repeating that ‘Russia violates the principles of international law’ we close our eyes to opportunities to avoid these conflicts by having a dialogue with Russia.

According to Rytövuori-Apunen, Russia has a “historical relationship of protection” with certain communities in the areas of former Soviet republics. Such relationship is a matter of identity for the state.

– In Russia, the meaning of the historical relationship of protection is that the relationship and the demonstration of power and its use strengthens the authority of the state and justifies it. Giving it up would be a risk for the authority of rule and its justification, says Rytövuori-Apunen.

Russia speaks about its borderlands in the language of diplomacy today, which includes for example democracy and human rights, even though the reasons to act in the borderlands stem from distant past. According to Rytövuori-Apunen, the Western world would benefit from understanding that Russia strives to be a prestigious member of the international community.

There seems to be a “regime change” bias in the Western discussion, meaning that it is assumed that state tradition and history of identity would change by replacing the leader.

– It is not beneficial for the West to leave Russia outside their circle. It is also shortsighted to imagine that Russia would change when Putin’s reign ends. There seems to be a ‘regime change’ bias in the Western discussion, meaning that it is assumed that state tradition and history of identity would change by replacing the leader.

Russia is not the only state with deep borders. As an example, Rytövuori-Apunen mentions the war in Yemen as a conflict between Saudi-Arabia and Iran, and the different branches of Islam.

The linear border of a modern state is socially and culturally rather thin in many places. If this is not understood, solving the conflicts becomes impossible.

– The West requires Russia to withdraw and Russia requires that the retreat can only begin after the framework of the political solution has been agreed upon. Which one is first in order? All the frozen conflicts are about the same thing, says Rytövuori-Apunen.

Russia speaks about its borderlands in the language of diplomacy today, which includes for example democracy and human rights, even though the reasons to act in the borderlands stem from distant past.

What can we expect from Russia’s borderlands in the future?

The situation has been the same since 2008 in South Ossetia and Abkhazia, and Rytövuori-Apunen believes that it will continue in the same manner unless something unexpected happens in Russia. Both conflicts are deep frozen, and they could be mitigated to ease people’s lives in the areas. When it comes to Abkhazia, the only way out is that the international community would recognize its independence.

– Russia’s foremost goal in any of these conflicts has not been annexation. The foremost goal has been to maintain good relations with Georgia, Moldova, Armenia and Azerbaijan. Then, at some point, after a complex, multiple-phase process the events of 2008 occurred and as a result, these quasi-states were recognized.

The writer is the editor of Alusta!