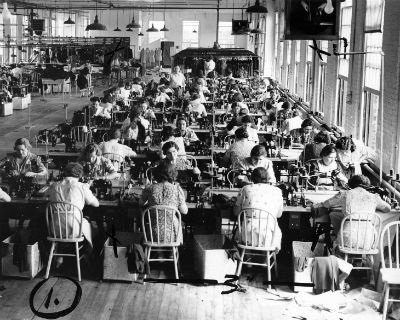 The History of Capitalism: A Large, Difficult, but Fundamental Problem

”How did such a system arise and evolve and what are its possible futures?”

Alustus! The history and variability of capitalist economies and societies is today a significant problem for social science and has been since the development of social science in the 18th Century. Indeed, it can be argued that this was the core problem that led to the initial emergence of social science. Historical thinking existed from well before that time, since the ancient world in fact, but the study of human societies and economies as distinct entities, with significant variations in time and place and historical trajectories, arose as part of the European Enlightenment and the discovery of many different kinds of societies around the world, as well as the emergence of rapid socio-economic change in northern Europe.

Capitalism and particularly industrial capitalism as a new way of organising human societies was a powerful disruptive and transformative force in a few places by the late 18th Century. With the birth of industrial and agricultural capitalism came the birth of historical social science and the debate over development and wealth. But historical social science has always been a problematic and controversial field with a high degree of contention and disagreement.

In the 21st century the intersecting problems of the appropriate foundations of historical social science and the history of capitalism have become even more urgent as the speed and pervasiveness of change has become ever greater. All the people of the world are now enmeshed in a great global structure of capitalist society that effects us all and is changing increasingly rapidly. Moreover, because capitalism is essentially an institutionalised system of power relations that rewards individual and class acquisitiveness, wealth accumulation, and greed, it results in great inequality (unless counteracted) as well as having great potential, if effectively regulated, to overcome poverty for all people and so improve health and quality of life. Capitalist production, being increasingly large-scale and increasingly productive, also impacts enormously upon the natural environment in a largely unconstrained manner. Capitalism is also an ideological system that, unfortunately, tends not take a long-term view of the social, economic, and environmental contexts of its own logic. As it has moved inexorably towards total globalisation capitalism has become increasingly less responsive to social control. The democratic forces of social regulation and amelioration of capitalism have now largely been bypassed in the 21st Century.

How did such a system arise and evolve and what are its possible futures? Explanation of the history of capitalism has to be approached within the broader problem of how to construct a persuasive approach to studying all human societies – the real but invisible large scale and small scale structures of social relations, ideas, and beliefs that bind people together socially in powerful ways and which change over time. For thousands of years small numbers of thinkers and writers, and recently very many more, have tried to articulate new, more thorough, and more persuasive ways to explain how societies exist and function and how they influence the behaviour of individuals, groups, and large populations.

The idea famously expressed by Margaret Thatcher that ‘society doesn’t exist’ is not taken seriously by anyone in any strong sense. Both the common sense idea and the scientific idea of the reality of societies as entities that somehow have real existence and causal power is the most important constituent understanding of the large and broad field of social enquiry today. Indeed, without it there would be no need for social enquiry, only enquiry into individual behaviour. That is, people seem to grasp intuitively and social scientists consciously that societies are more than just the collection of individual people that live within them and that these collectivities exert power over individuals somehow. Nevertheless, it has proven very difficult to move from that basic understanding to the building of a persuasive, consensual (even a scientific) approach to the task of explaining how societies exists and exert power. Ever since systematic social enquiry began with Giambattista Vico in the 18th century and then Adam Smith, Adam Ferguson, and others in the late 18th Century, the tide of contention has grown rather than declined.

No consensus has developed, unlike in most fields of natural science. In the natural sciences, there are, of course, universally (or at least very widely) accepted general theories of the nature of existence of the entities that particular broad fields examine, such as atomic structure, chemical structures, bio-organisms and bio-systems, geo-systems, planetary systems, and so on. And there are general theories about how these systems function as systems. Concepts of systemness are essential to all the natural sciences. They all have the essential idea of systemic emergence. That is, the systems have powers and properties that emerge from their structures and are not reducible to the substructure of micro elements that constitute them. There is also the idea of a dynamism within each system such that it changes gradually and sometimes rapidly over time and so has a history. Indeed, all natural systems are historical in that they evolve over time through endogenous and occasionally exogenous forces, both gradual and sudden.

Is human society a historical system with emergent properties and powers and which evolves like other natural systems? Can we explain the structural systemness, processes, and evolution of societies, in general and in particular, with concepts and theories similar to those of the natural systems? What role would such an approach have for humanness in the senses of consciousness, rationality agency, choice, decisions, emotions, and so on. This issue has been the basic barrier to building a science of society because it has been thought by many people that society is not like any other system in that it is not a natural system but a human creation and therefore cannot be explained like any other system. Humans are supposedly not determined by natural forces but by conscious and sub-conscious thought processes.

In the late 19th century the reaction against the positivist push for unifying natural and social science relied on the older (advocated by Vico among many others) view that humans are not natural beings and so their social behaviour and relations have to be explained in a manner that involves empathetic understanding. There are two basic flaws in this argument, however, which is that humans do not actually create their social arrangements, consciously or unconsciously, for they always pre-exist every person; and that human decisions, actions, and agency are themselves caused by certain forces over which humans have little or varying control. Those forces of a material-environmental, social structural, ideational, and cultural kind have a systemic nature which humans are able to understand and reproduce as well sometimes collectively transform but within which they must live their lives in a constrained way. In fact we cannot live except within an institutionalised (formal and informal) social structure of co-operation and regulation of behaviour that always pre-exists us.

A key issue for social explanation, then, is not just the nature of social structural systemness but social action, motivation, and agency. In this sense, social systems, at a very basic level, are not much different from other biological systems, all of which have a dynamic of structure and agency. But as Karl Marx pointed out in the mid-19th Century, probably before anybody else, the difference between animal societies and human societies is conscious reproduction and transformation.

The place of democratic regulation of capitalism, so powerful in the advanced Western states in the post-war decades, is now a major issue for politics and social science once again. The current trend away from the democratic amelioration and governance of the inherent greed of capitalism and its environmental destructiveness should be a major motivation for theorising and studying the long-run tendencies of the capitalist global system.

Crouch, C 2013, ’From Markets Versus States to Corporations Versus Civil Societies’, in Schaefer and Streeck (eds) Politics in the Age of Austerity, Polity Press, Cambridge.