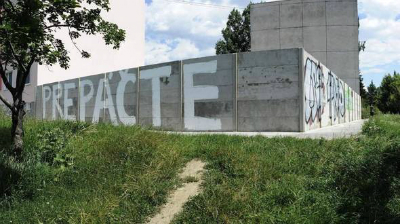 Jaroslava Kovacova works in the University of Economics in Bratislava

For the dignity of Roma in Slovakia

’Anti-Roma’ wall in Slovakia, where someone painted the word ”Prepacte” (”sorry”). Source: SITA.

”The social inclusion of Slovakia’s Roma minority is an unresolved issue and a topic of on-going debates for many decades. Several attempts have been made to improve the socio-economic conditions of the segregated, impoverished Roma communities with moderate success. One reason of the continuous failures was that previous programs did not concentrate on long-term social needs of Roma.”

Alustus! Now, due to the changes introduced in the 2014-2020 EU programming period with regard to allocating ESF and ERDF funds, there is an increased chance of establishing projects with long-lasting effects. The success of these upcoming projects aimed at mitigating the social exclusion of the Roma is a critical question for Slovakia: the country must find a way to solve the social problems of the unemployed, less educated Roma people whose number is proportionally growing in the decreasing and ageing population. This requires a cross-disciplinary approach with a long-term, strategic view when designing new projects aimed at Roma inclusion. This is not only an economic necessity but also the humanitarian obligation of the country.

Current state of the art

The Roma (also known as ”Romani or Gypsies”) form the second largest minority group in Slovakia after Hungarians, though the exact size of the Roma population is unknown, as they often label themselves as ethnic Slovaks or ethnic Hungarians in the polls. In addition, Roma may have been unsure about the implications of identifying themselves as Roma and how state would use the data afterwards.

According to the recent Project Atlas of Roma Communities (2013) there are about 402,840 Roma living in Slovakia, what represents 7.45 percent of the total country’s population. In the latter census conducted in May 2011, the number of people stating that they were Roma stood at 105,700 equaling 2 percent of the overall population in Slovakia. Due to higher birth rates among Roma than other population groups, this share is likely to rise in the coming years. Recent demographic projections (2013) even suggested that, given current trends, Roma could become a majority in the country by 2050.

Roma in Slovakia are overrepresented among the poor and lead the ‘worse off’ statistics in terms of nearly all basic social indicators, starting with overall low social status, including inadequate levels of education and qualification, high rate of unemployment and increasing unemployability, poor housing conditions lacking basic infrastructure, poor health status degraded by inaccessibility or low accessibility of health services.

Vast majority of Roma depend on social welfare, nevertheless, many of them are not registered in regional labor offices and fall below the official basic support level. The Slovak social system is badly harmonized and even though it may sound ridiculous, but the unemployment benefits pay more than regular jobs in the low wage sector, what creates a strong deterrent for unemployed people to join the workforce. (Social Business Earth, 2012).

Roma are also expropriated in other i.e. access to public services and exclusion within society. As a consequence of what, there is little capacity among Roma to advocate for their specific needs, to have influence in the policy process or take an active role in the integration process. (The World Bank et al., 2002).

“If integration were to be successful, it would mean not only economic and financial gain for the country, but also a gain for ordinary people,” said Peter Pollák, the government proxy for Roma communities.

Roma integration is indeed in the national economic interest of Slovakia. According to Pollák (2012) the economic losses to Slovakia resulting from social exclusion of Roma citizens come to 7% of GDP and the losses of not including Roma in the country’s labour market are higher than the costs of integrating them into society. (The Slovak Spectator, 2012).

Between 2007 and 2013, more than Euro 185 million from the European Social Fund (ESF) and government funding was devoted to projects aiming at drifting Roma integration. The Slovak government has struggled to come up with policies to address the needs of the Roma community. Last year, the UNDP published a report analysing the progress of such projects, concluding that funds were not targeted at the right interventions, and were too short-term in nature. Many of these projects focused just on training or generating temporary employment, but once over, they had no lasting impact on the Roma’s ability to find work.

In the forthcoming programming period the EU will provide large sums of money to develop and implement inclusion programs and projects, and will monitor the progress of Member States. This provides a unique opportunity for Member States with large Roma minorities to significantly improve the integration of their Roma populations. In the previous programming periods, it was impossible to combine the European Social Fund (ESF) and the European Regional Development Fund (ERDF) investments under one Operational Program, what had caused inefficiencies and led to lesser impact, especially in areas where linking soft (ESF) and hard (ERDF) investments would have been a fundamental factor for success. Roma inclusion is a sphere where no infrastructure development (i.e. housing, schools, community centers, etc.) will succeed unless accompanied by outreach, training, mediation, social work, courses for parents, and other soft investments. (The World Bank, 2012).

The fact is that population dynamics make Roma inclusion unavoidable for Slovakia’s long-term economic sustainability of its social protection system. As already mentioned the Roma population is estimated to nearly double at current growth rates by 2050, on the other hand Slovakia‘s population as a whole is projected to shrink. Therefore, in an otherwise rapidly aging society, paying for future pensions and social services will increasingly depend on today‘s young Roma.
Hence, the quality and level of education that young Roma achieve today and in the upcoming years, and the kind of skills they develop to become productive citizens, bear considerable implications for the future of the Slovak society as a whole. (The World Bank, 2012).

ATLAS of Roma Communities in Slovakia 2013 – project financed by the Ministry of Labor, Social Affairs and Family of the Slovak Republic within the framework of the cost-sharing programme between UNDP and the Ministry.

Jaroslava Kovacova works in the University of Economics in Bratislava