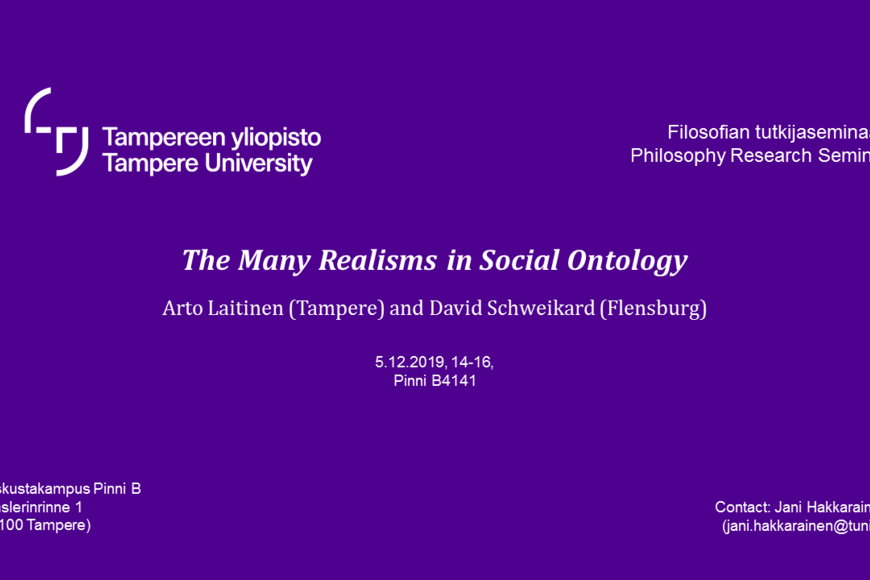 Can one be a realist in social ontology while holding that social reality is not mind-independent, or not independent of social constructions? Arguably one can. In this paper, we distinguish four senses of “realism” in social ontology, and only one of them relates “being real” to independence from individual and collective minds. Even that conception of realism can be formulated so (e.g. as independence from current observers or researchers) that one can be a realist social constructionist.

In the most minimal sense of realism (R1) all cognitivists, non-instrumentalists, are realists. The second sense of realism (R2) rules out also error-theorists and eliminativists: the claims are not only to be understood literally, but some of them succeed in being true. The third sense of realism (R3) is the one that links reality to mind-independence, and rules out subjective (individual) and intersubjective (collective) dependencies. However, more sophisticated or refined versions of that criterion distinguish between various kinds of dependence, and various relata of the dependence-relation, and some of those leave room for realism about socially constructed entities. A fourth conception of realism (R4) focuses on irreducibility: something is really real only if it cannot be reduced to some lower-level entities, features or facts. For all four forms of realism, related forms of anti-realism (AR1-AR4) can be found. There are various more detailed forms of the four kinds of realism and anti-realism, so more sophisticated, refined or detailed maps of realisms can be construed, and we suggest some ways in which this can be done. We illustrate the usefulness of distinguishing senses of “realism” with reference to debates in the field.