A third of sunbathers engage in risky tanning 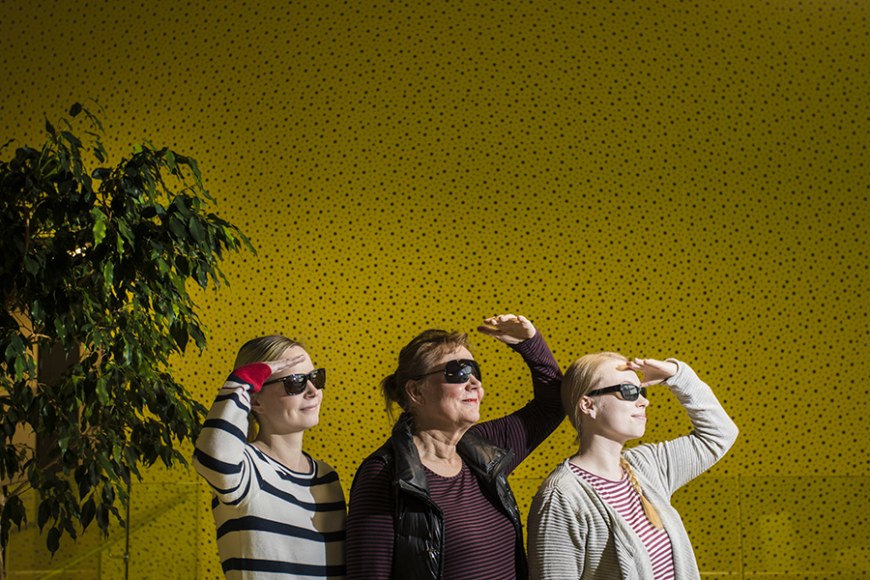 Sungazing. Anna Toledo, Erna Snellman and Iina Tarkiainen focus their researcher’s gaze on the reasons people tan themselves despite the risks.
Finns sunbathe in order to avoid the seasonal affective disorder (SAD) despite the cancer risks.

A recent study shows that one third of sunbathers in southern Finland abuse tanning or are tanning dependent.

People may sunbathe in order to prevent the symptoms of seasonal affective disorder (SAD) even though there is no conclusive evidence that sunlight helps with depression. The only thing known for sure is that sunlight causes melanoma and other skin cancers.

The association of the symptoms of SAD and tanning dependency was investigated by a survey conducted among sunbathers on the beaches and parks of the cities of Tampere and Pori in Finland in August 2015. The respondents completed a survey via an internet link or by post.

There were 229 replies from adult Finns, 84% of whom were women. The median age of the respondents was 35 years.

Tanning pursued even without sunscreens

42% reported symptoms related to SAD. However, the study did not find a statistical link between SAD and being dependent on sunbathing.

Half of the respondents sunbathed regularly whenever possible. The different groups of respondents clearly varied so that 83% of the tanning-dependent and 75% the tanning abusers regularly sunbathed, whereas the corresponding figure for the non-dependent was only 37%.

The majority of the respondents, 94 percent, had sunbathed because they wanted to tan their skin. 12% never used sunscreens.

Sunbathing despite the risks

The ultraviolet radiation of sunlight causes skin melanomas and other skin cancers. The popularity of sunbathing has not decreased even though the number of skin cancer cases is growing in Finland.

“Previous studies have shown that those engaging in risky behaviour are aware of the risks, even more aware than the rest of the population, but they may explain sunbathing to themselves and others by saying that sunlight is also beneficial,” says Doctoral Researcher Anna Toledo from Tampere University who has studied the harm caused by ultraviolet radiation.

People appeal to the positive aspects of the sun as a source of vitamin D and a mood enhancer even though researchers are saying that nobody needs to sunbathe just because of vitamin D.

Erna Snellman, professor of dermatology and venereology, says that people are generally aware of the dangers of sunlight and that it causes cancer.

“However, they do not care about the risks because the power of the sun seems so strong. When the first spring day comes, everyone goes outside in their lunch break to gaze at the sun,” Snellman says.

Snellman says that she has met skin cancer patients who still sunbathe even though sunbathing has been explicitly forbidden to them.

The research project on the association of sunbathing and mental disorder prevention started from the observation that people act against their own interests when they expose their skin to sun despite the risks.

“Sunbathing can be really addictive so that people do not care when doctors try to talk sense to them,” Snellman says.

Snellman compares compulsive tanning to substance and digital playing addictions even though it is not considered an illness by the International Statistical Classification of Diseases. However, according to Snellman, the condition has elements of distorted body image, compulsive behaviour, and lack of impulse control.

Tanning dependency is associated with relieving stress and depressive mood by tanning, a compulsive desire to tan the skin in order to enhance mood, restlessness and irritability, unsuccessful attempts to stop tanning, and continuing tanning regardless of the damages it causes.

Light therapies are popular in Finland where natural light is scarce in the wintertime. Tanning beds, bright light therapy lamps and earlights are marketed to consumers.

According to Snellman, the efficacy of earlights has not been proven, but bright light has been observed to have an impact on SAD. Research Professor Timo Partonen from the National Institute for Health and Welfare, who collaborates with the researchers in Tampere, is the leading expert on SAD in Finland, and has studied eg bright light therapy.

Toledo’s recent, unpublished study found that ultraviolet therapy improved the average mood. In the study, the participants were given narrow-band UV-B light therapy on four days of the week, after which they marked their current mood on a 10-centimetre scale from very bad mood to the best possible mood.

In another already published study by Toledo, β-Endorphin, a hormone that elevates the mood, increased in people’s epidermal skin as the result of ultraviolet radiation.

β-Endorphin is an opioid, i.e. a dependency-inducing morphine-like substance. Studies on mice have clearly shown that their sun dependency was caused by β-Endorphin induced by ultraviolet radiation.

A source of pleasure may also be found in infrared light

There have only been a few clinical trials related to sun dependency. Next autumn, the doctoral research of Iina Tarkiainen is about to start in Tampere. She will focus on examining infrared radiation instead of ultraviolet radiation.

Ultraviolet radiation induces the skin to tan and is linked to skin cancer, but Tarkiainen’s research is asking whether sunlight dependency could be connected with infrared radiation.

Tarkiainen will start recruiting voluntary participants for her PhD study next autumn to examine various mood-related effects of infrared light. Two 20-person groups are needed, one of which will be the control group.

“Infrared light will be used to heat the body while we will measure the impact this has on the participants’ mood, skin and circulating mediators. We will also analyse whether the light has an effect on the people’s circadian rhythm, i.e. their internal clock,” Tarkiainen says.

Tarkiainen will carry out her study at the Department of Dermatology, Tampere University Hospital. The research outline is still being finalised, but the preliminary aim of the research is to give the studied individuals one dose of infrared light and do more detailed examinations afterwards.

Previous studies have shown that when the body temperature is raised to 38.5 degrees Celsius with infrared light, the effect on clinically depressed patients is similar to that of antidepressants. According to the study, one dose of infrared light had a therapeutic effect that lasted for two or even as many as six weeks.

Snellman says that she has personally tried medicinal phototherapy devices because as a dermatology researcher she wants to know the types of treatment the patients receive. According to her, the heat generated in ultraviolet radiation treatments feels pleasant but the sudden disappearance of the heat, when the device is switched off, feels unpleasant. The experience led her to ponder whether the heat from sunlight is the crucial factor that induces dependency.