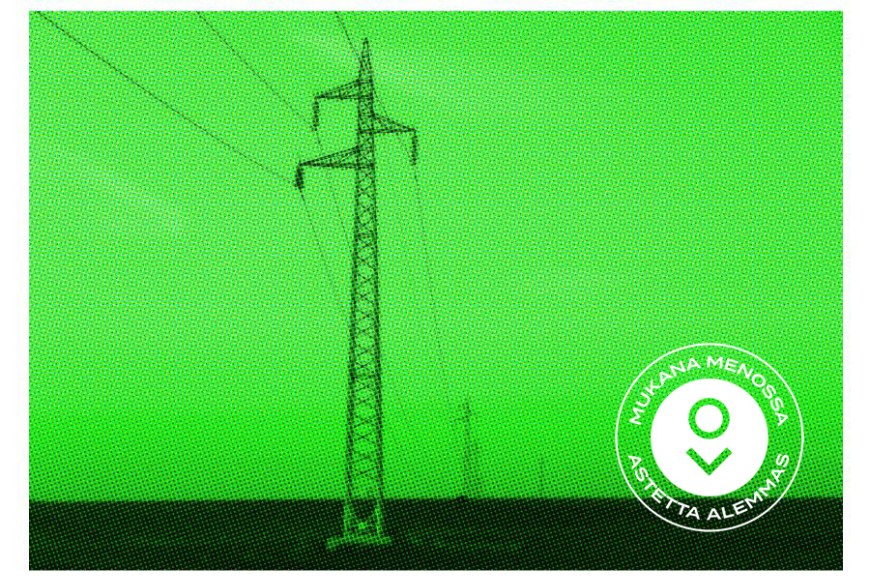 Photo: Mladen Borisov / Unsplash. Image processing: Jonne Renvall / Tamperee University
Climate change and Russia’s invasion of Ukraine have pushed Europe into a deep energy crisis; there are problems with energy supply and electricity prices are soaring. As part of a national energy-saving campaign, Tampere Universities community will save electricity by, among other things, reducing the indoor temperature of its buildings by one degree. Staff and students are also encouraged to use electricity responsibly.

Most of the University’s campus properties are owned by Suomen Yliopistokiinteistöt oy (SYK). The main campus of Tampere University of Applied Sciences is owned by TAMK. The Universities community is working with the property owners to develop solutions for energy saving, and actions to save electricity have been jointly agreed. Facilities’ users will see and feel their effects, at least to some extent, during this autumn and winter.

”We will drop the default room temperature by one degree, optimise the duration and power of air conditioning, and turn off most of the cooling devices during winter. In addition, we have projects under way on the Hervanta and TAMK campuses where we will adjust the operation of fume cupboards, as necessary. By adjusting the ventilation of fume cupboards according to the actual use times we can save about 0.5–1 GWh of energy per year,” says Head of Facility Management Petri Ojala.

Electricity is also saved by reducing general lighting. In snowy courtyards and campus entrances, most of the routes can be kept safe for walking by using sand instead of heating them.

“In all saving measures, we will ensure that the health and safety of the premises will not be compromised. De-icing, for example, cannot always be replaced by sanding, but slips must be prevented somehow,” Ojala adds.

Provisions have been made for the fluctuations of electricity prices

Ecology and energy saving have guided the energy procurement and consumption of Tampere University and Tampere University of Applied Sciences for years. This has been prompted by the Universities community’s ambition to become carbon neutral by 2030.

The Universities community uses electricity produced from 100% renewable energy sources, which it purchases through the joint procurement company Hansel oy from the Nordic Pool electricity exchange.

Provisions have been made for the fluctuations of electricity prices

“Tampere Universities community is prepared for even the sharpest fluctuations in electricity prices with a hedging mechanism that smooths the electricity prices on the exchange. Compared to buying electricity directly from an energy exchange, we have already saved EUR 1.5 million this year,” says Director of Facilities Management Pertti Iso-Mustajärvi.

The Universities community, with its buildings and people, annually consumes around 33.6 GWh of electricity.

“There is surprisingly little seasonal variation in the electricity consumption of the Universities, as district heating is utilised for heating in winter and cooling consumes electricity in summer. The use of district cooling supplied by Tampereen Sähkölaitos has recently increased, and it is already used on TAMK’s main campus and in the Arvo building on the Kauppi campus,” Ojala says.

The most significant sources of electricity consumption are technical building services (including air-conditioning, cooling and other services), laboratory environments (including equipment), functions related to the regular use of the buildings (including lighting and electrical devices), and the kitchen and restaurant environments.

In laboratories, most of electricity consumption is consumed using the laboratory equipment and the associated technical building services.

Electricity shortages and planned blackouts may be expected in winter

In addition to saving electricity and preparing for price fluctuations, it is important to anticipate possible power shortages in the coming winter, especially during long periods of frost. Electricity shortages are considered to occur when domestic production and imports are insufficient to cover the consumption. Local distribution network operators disconnect consumption from the grid so that blackouts last for a couple of hours at the most.

“So next winter, we may find ourselves in a situation where the electricity supply to our campuses will be limited due to a power shortage. Working on campuses during the blackouts can be challenging,” Iso-Mustajärvi says.

The Universities community will follow the instructions of Tampereen Sähköverkko oy and the grid company Fingrid on blackouts. The impact of blackouts on the use of facilities and systems and on research activities is currently being examined by the faculties, IT Services, and Facilities Management.

Universities community members are encouraged to use electricity responsibly

Pertti Iso-Mustajärvi and Petri Ojala call on the Universities community members to be patient and flexible during the coming winter.

The Down a degree joint campaign by Motiva, Energy Authority, Ministry of Economic Affairs and Employment, Prime Minister’s Office, Ministry of the Environment and Sitra encourage everyone in Finland to take quick and concrete energy-saving measures. The aim is to get at least 75% of the population to save energy and achieve permanently lower energy consumption in the long term.