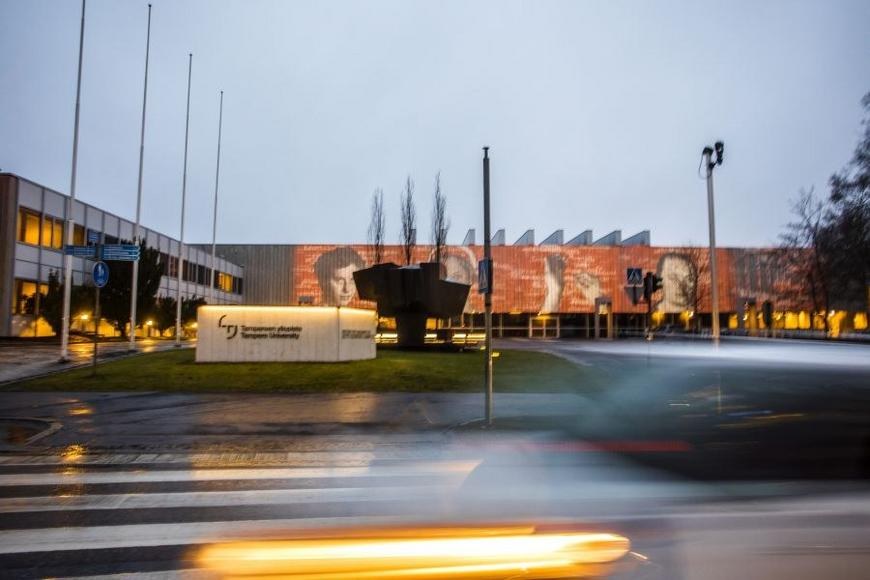 In the dark season, Universitas, the light work of artists Charles Sandison unveiled at the end of 2018, is reflected on the façade of Päätalo. Now the artist has added the colour orange into the work in honour of the UN campaign as well as pictures of women who have studied and worked at the university.

“Violence against women is a global problem as we all know and let us hope that the education of both girls and boys, men and women, is one part of the solution,” Sandison says.

He finds it odd and beyond understanding that women still must often face violence in Finland, a country that is famous for gender equality.

“So, this Orange reminder is a good way to keep the discussion on these matters alive. Equality does not take anything away from anyone, in fact the reality is opposite,” Sandison points out.

Juha Teperi, Vice President of Tampere University and chair of the equal opportunities working group, believes it is important that the topic galvanises the community widely.

“Violence against women is a major problem also in Finland, but we often turn a blind eye to its existence. Our university wants to be involved in reminding us of the problem, and especially that we should all be part of the solution,” Teperi says.

In Finland, thirty landmarks in 19 locations are involved in this year’s campaign. In Tampere, Tampere Hall, the Näsinneula observation tower and other buildings will be illuminated.

“Now, if ever, it is important to take a stand against violence against women. Violence occurs in every country, town, municipality and village, meaning that nobody should turn a blind eye to it,” Hirsikangas says.

“It is so great and important that the friends of UN Women in Tampere are also actively raising the issue. Violence against women is a serious human rights violation and a shadow pandemic that needs everyone to eradicate it,” Hirsikangas says.

The Orange the world campaign starts on 25 November which is International Day for the Elimination of Violence against Women. The 16-day campaign will conclude on the International Human Rights Day on 10 December 2020.

Anyone can join the campaign by wearing orange and participating on social media. In addition, UN Women, the United Nations entity dedicated to gender equality and the empowerment of women, receives donations.

Charles Sandison’s work of light, which is now orange, is projected on the façade of Päätalo, address: Kalevantie 4.