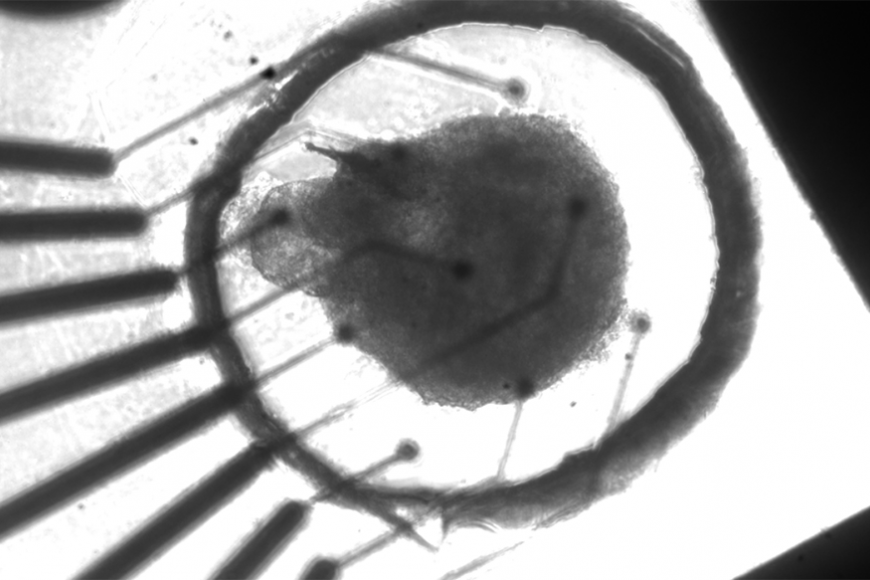 Clusters of heart cells on a multi-electrode array. Nine electrodes measure the electrical activity of the contracting cells.
A computational study of the electrical signals from spontaneously beating heart cells reveals self-similar properties in the cellular beat dynamics, analogous to those of an adult heart. The findings are especially important in establishing the heart cells produced with the stem cell technology as a model of a heart to study hereditary cardiac diseases and drug safety.

In 2012 John B. Gurdon and Shinya Yamanaka were awarded the Nobel prize in Medicine for the discovery that mature cells can be reprogrammed to become immature stem cells, which then can develop into any type of cells in the body. Heart cells, produced this way, exhibit spontaneous contraction without any external stimulation, which can be studied directly.

A healthy heart rate fluctuates with complexity characterized by self-similar properties, commonly known as fractals, which have been attributed to the interplay between two branches of the autonomic nervous system.

“It is surprising to see that the fractal property is also observed in beating heart cells even in the absence of autonomic nervous system,” says Jiyeong Kim, a doctoral student at Tampere University.

Utilizing advanced time-series analysis methods, such as detrended fluctuation analysis and its variations, researchers at Computational Physics Laboratory confirmed the fractal properties in the cellular beat rates as well as similar properties in the duration of the electrical activity associated with each beat, which have been previously unknown. Their detailed study also showed that there are remarkable similarities in the beat dynamics between heart cells and a mature heart. These discoveries can be applied in the study of different heart deseases and in drug testing.

The project has been carried out by Jiyeong Kim under the supervision of Prof. Esa Räsänen and in collaboration with Dr. Ilya Potapov and Joonas Latukka in the Computational Physics Laboratory at the Faculty of Technical and Natural Sciences, and with Disheet Shah and Prof. Katriina Aalto-Setälä from the Heart Group at the Faculty of Medicine and Health Technology and Tampere University Hospital.