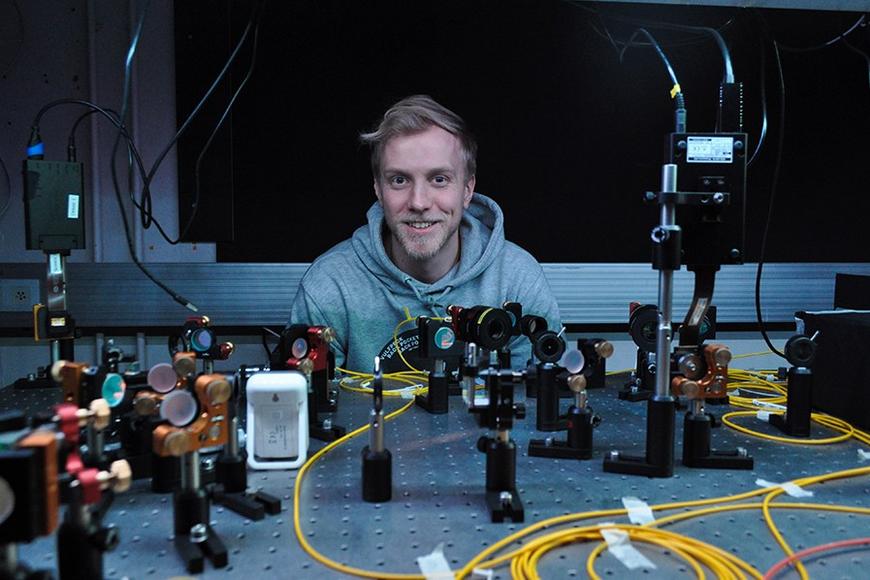 Master of Science Markus Hiekkamäki has received the Finnish Physical Society’s annual Young Physicist Prize for his master’s thesis in the field of quantum optics titled Unitary transformations of spatial modes for quantum experiments. In November 2019, Hiekkamäki completed the thesis in the Faculty of Engineering and Natural Sciences at Tampere University.

In the thesis, Hiekkamäki experimentally demonstrates advanced manipulation of the spatial structures of light that can be used in such applications as quantum communications and quantum information processing.

“The thesis also outlines how these transformations can be used to observe novel two-photon interactions. We have started investigating these interactions as the next project after the thesis,” Hiekkamäki says.

Hiekkamäki wrote his thesis in the Experimental Quantum Optics group led by researcher Robert Fickler, which was set up in January 2019. Hiekkamäki’s study was the first project the group began.

The results were also published in two scientific articles. One was published in the Optica journal and the other in Optics Express.

Fickler’s group investigates novel tools and applications for light-based quantum technologies by mostly using photons which are the tiniest particles of light that can exist.

“We also perform experiments probing the foundations of quantum physics and the properties of photons. Furthermore, we try to manipulate light and generate novel types of light beams and structured photons.,” Hiekkamäki adds.

“We are trying to add to the general knowledge about photons and quantum physics with our basic research. We are also developing new methods of manipulating light that can be used in such applications as quantum and classical communication,” he explains.

“My own experience in Fickler’s group has been amazing. I have had plenty of opportunities to apply my know-how and challenge myself. I am constantly learning and able to create new knowledge through our research. Being able to work in the forefront of our field with my colleagues and our collaborators is really exciting and rewarding,” Hiekkamäki says.

In January, he started working as doctoral researcher in Fickler’s research group.

“For roughly the next four years, I am planning to continue the experiments we started during my master’s thesis project and to be involved in any new projects we decide to pursue in that time.”

The Finnish Physical Society awards the annual prize for an outstanding master’s thesis in the field of physical sciences. The purpose of this prize is to support young researchers and acknowledge them for their exceptional work.

This year, the prize was divided between two master’s theses. In addition to Hiekkamäki, Master of Science Mathias Fontell from Aalto University received the prize.