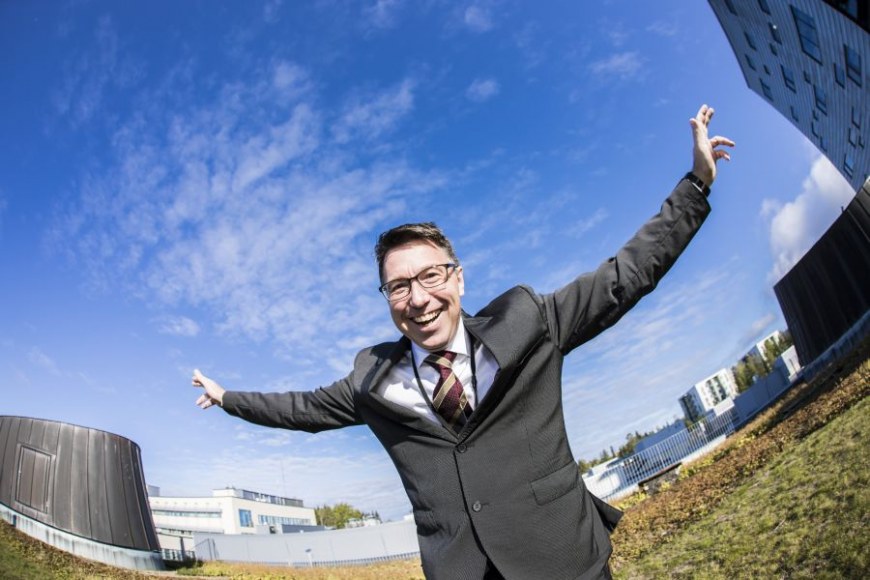 The quick-witted researcher wants to develop aviation training in the Pirkanmaa region in Finland. Wright also actively participates in the public debate on aviation.

Industry Professor Stephen Wright feels at home in Tampere. The office of the aviation expert, who has worked for both business and the academia, is on Tampere University’s Hervanta campus now. Before moving to Tampere, Wright worked at the University of Leeds.

In his studies, Wright has concentrated on the safety and technology of aviation as well as human factors.

In addition to scientific research, Wright actively participates in public debate. Over the years, he has been a frequent guest on television in Britain and worldwide, and appears on various air-crash documentaries explaining the chain of events.

“I have cooperated with various media a lot. For example, I am on first-name terms with people from BBC and Sky News,” Wright says.

A short stint as a police officer

Wright got his first experience of the Nordic countries when he earned a degree in chemistry and studied at Uppsala University in Sweden organised through the EU’s ERASMUS programme in the early 1990s. Next, Wright’s career took a very different turn when he started working as a police officer.

“I escaped from that job within the year,” Wright says jokingly.

“I did some boring jobs for two or three months until I was recruited by the national airline, Cathay Pacific Airways. While there, I specialised in safety and human factors. In practice, that means analysing where people fail and doing something about it to prevent it happening again,” Wright says.

Wright says that the analysis of human factors has focused on pilots’ actions for too long. If there were accidents or events occurring, pilots would be looked at first and errors attributed to their human factors.

“That is how it has traditionally been in the industry. However, then human factors began to be analysed more broadly, that is the pilots are not always the ones to start the problem. Licensed aircraft engineers, mechanics and even office staff can also act in ways that increase the risks,” Wright says.

Maintaining a passenger airplane is a complex and exact operation. Manufacturers provide thick maintenance manuals that explain all stages of the work in detail. The manuals are also constantly updated, and the airline must conduct maintenance according to the tasks and intervals detailed in such documents.

“That is how it should be: the manufacturer provides the instructions and the licensed aircraft engineers follow them to a T, step by step. However, the practical situations, the local methods of working may be different to what is written in the book. It was up until recently that the engineers tended to carry their own small notebooks where they made personal notes of the maintenance tasks. In other words, they used their own experiences as clues to figure out how each maintenance task should be done,” Wright says.

However, that led to a deviation in some of the manufacturers’ instructions. In daily routine work, such tips are also easily passed on to the next generation of mechanics, which differs from the official method to conduct a task.

“Today, all airlines organise compulsory continuation training for all engineering staff every two years. The training highlights all the tasks and problems encountered at that organisation as a means to avoid potential problems for the coming year. Human factors usually appear frequently as underlying problems that make the engineering even more complex, such as working in extreme conditions. Additionally, updates must include any changes in the law(s) and the local regulations,” Wright explains.

At the turn of the century, Wright returned to his home country United Kingdom and started working for the British Airways Group at Gatwick. His job description included, among other things, the training of licensed aircraft engineers, teaching courses including aircraft maintenance, and setting up an approved maintenance training organisation and training school.

Next, events in world history changed the direction of Wright’s career.

“September 11 happened, and my employer BA had to lay off many people in the aftermath of the attacks. However, another UK organisation approached me to establish a new training organisation for them, and soon after that, Lufthansa Technical Training and my operation merged. I was appointed as Head of Training in their British unit,” Wright says.

A few years later, the possibility of an academic career emerged when Kingston University, London, suggested he take up a senior lecturer post to teach and manage a new degree course.

“In those years, I worked on my PhD dissertation part-time in addition to my other work, until the University of Leeds recruited me. Kingston was a great teaching university, but Leeds offered me better research opportunities and laboratories. I completed my doctorate in aircraft engineering in 2013 at Leeds,” Wright says.

A shortage of skilled labour in the aviation sector

At Tampere University, Wright is working closely with the AiRRhow alliance, which involves industry and public sector players in the aviation sector. The alliance implements a novel way of working in the public-private partnership model harnessing the expertise of members across current and future business endeavours. Education and expertise is the backbone of creating a vivid community around the area.

“The aim is to bring together aviation expertise in the Pirkanmaa region. As part of the project, we will also offer training for pilots and licensed aircraft maintenance engineers,” says Wright.

There is a high-quality training centre for pilots and maintenance engineers in the region.  Complementary academic training will be offered at the university so that people who wish to become pilots or engineers can earn a degree in addition to their official aviation licence. By doing this, they can be equipped with a wider skillset that will help their future careers in aviation or other fields, for example, in management and leadership.

More training is needed in this sector because the aviation industry has strongly expanded in recent years, which has led to a labour shortage worldwide affecting the growth potential of the entire sector.

“The big problem in the industry is that airlines do not want to fully support the costs of the initial training. In many places, the industry suffers from a labour shortage,” Wright points out.

No easy solutions for CO2 emissions

In order to stall climate change, humankind must rapidly reduce its greenhouse gas emissions. Flying causes some of these emissions, which makes technological reforms desperately needed.

“Biofuels have been proposed as an alternative to the current Jet A1 fuel. However, they come with many unresolved problems. Biofuels often contain more water than Jet A1 kerosene, which, together with bacteria, causes growth in the fuel tank. This leads to the need to clean the tanks increasingly often, which is costly. Failure to manage this phenomenon would cause corrosion that spreads from the tanks to everything else inside,” Wright explains.

According to Wright, increasing the use of biofuels would be easier on the ground because airports need much heavy machinery that could be adapted to use biofuels without the need to recertify the equipment. Many airports have already done so.

“My guess is that biofuel-powered aircraft will become part of aviation, but for the time being the focus is still on conventional fuels,” says Wright.

Another option to reduce emissions could be found in electric planes. In recent years, the European Union has supported the development of hybrid airplanes from the Horizon 2020 research and innovation programme. According to Wright, a realistic timetable for hybrid commercial planes is in the 2030s.

“The big question in my mind is where will the electricity come from? Do we need new power plants and how would they produce energy? In my opinion, these questions are still unresolved,” Wright points out.

For training purposes, electric airplanes are now technologically ready, approved and on sale.

A young boy admired airplanes at the airport

Wright always knew what he wanted to do when he grew up. London’s Gatwick airport was close to Wright’s home and he dreamt of flying as a boy. He naturally also has a pilot’s licence and takes to the skies whenever possible.

“I did airplane spotting when I was young. My first dream was to fly military aircraft, but life took me in another direction. I have always loved to fly and am in my dream job now,” Wright notes.

Family and hobbies: Married with a wife and daughter in Tampere. Hobbies include weekend flying, cycling and automotive engineering.