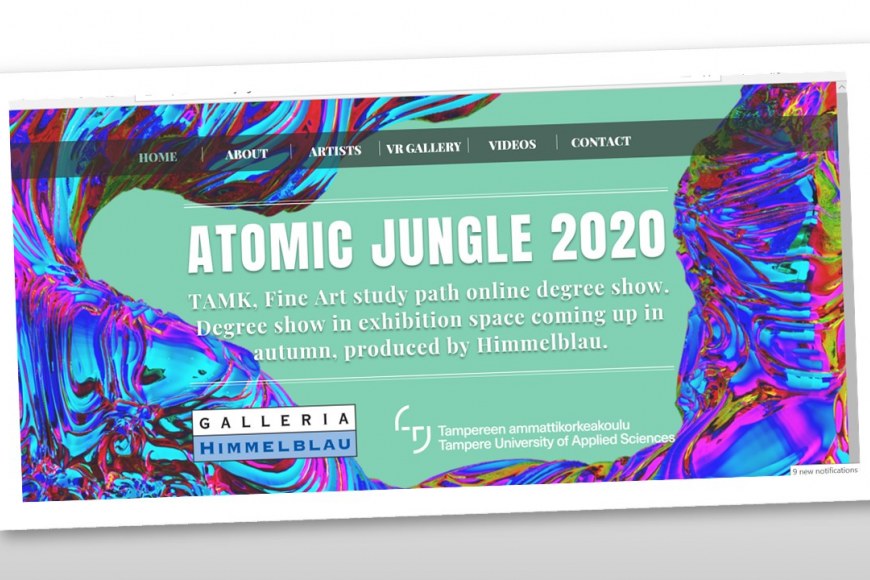 Atomic Jungle brings together the virtual Degree Show works of TAMK’s 4th year fine art students. Although the physical works have been forced by the times to be virtual only, a live exhibition will take place in the near, healthier future. The facilities will be sponsored by Himmelblau Printmaking Studio in Finlayson, Tampere.

"There is a certain element of absurdity in the world we live in, one of weirding saturated hues and deep shadows. At times we look at the unfolding of events, the twisting of truths and the impossibility of nonsense around us, and the only logical conclusion we can reach is that either we or the world have gone bananas. Possibly both.

These times are such times.

Atomic Jungle, by definition, is a jungle of atoms. A dense mass of tiny stuff that works together to form life and sustain itself. Something exotic and theoretically wild and exportable, but also inexplicably moist and mosquito-ridden. Something we can vaguely perceive as a whole, but the moving parts of which elude our naked eyes.

And so it happened that in the spring of 2020 – a utopian time of health and people coming together – that a small group of atomic jungles decided to exhibit their art together. The world looked upon their endeavour and began giggling sarcastically, looking away towards a stack of toilet paper and hand sanitizers. But they went along with it anyway – undaunted at the face of a world that seemingly left its logic in the pocket of a different pair of pants.

Here, before you, are the atomic jungles that they have created – each a prism refracting the ludicrous light of the world in its own mad way, attempting to form some semblance of sense. Some refract the world itself, discussing climate change, mental illness and more. Some refract ideas, such as virtuality, comfort and privacy. Some refract themselves and others, delving into urban life and the boundaries of the emotional self. Utilizing paintings, sculptors, photos, videos, text, physical spaces and more, a biodiverse selection of jungles is unveiled.

We embrace the absurd –  just without touching anything."