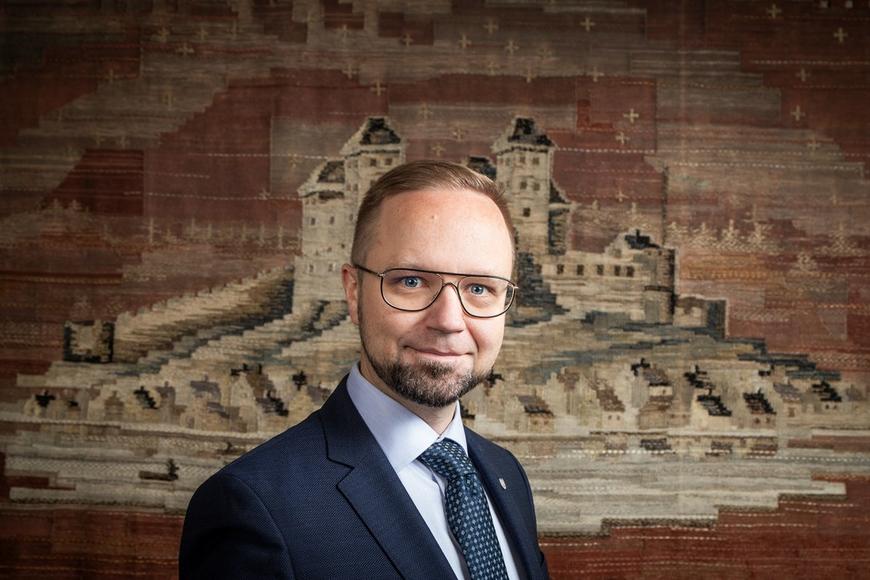 Olli-Poika Parviainen, who became Mayor of Hämeenlinna in August 2021, describes his career as quite hectic and full, but also diverse and rewarding. His job is to lead the Hämeenlinna City Group with all its sub-operations, and his daily work includes strategy and human resources management, corporate governance, and cooperation with numerous affiliated communities.

“In my career, I have held a wide range of public administration posts with a particular interest in social and community development. This job offers a great opportunity to develop broadly, to grow as a person and to meet interesting people. I feel that I am predominantly in a service role,” says Parviainen.

Parviainen’s background is quite exceptional for his current job and career path. Most people in similar positions have a background in administrative science while Parviainen's background is in information sciences.

“I think my example shows that a particular degree is not always a decisive factor for the direction a career will take, but, for example, the entirety of various skills and a diverse background may play a significant role,” Parviainen mentions.

Olli-Poika Parviainen is a proud double alumnus of the Tampere Universities community. Having completed comprehensive and upper secondary school in Rauma, 19-year-old Parviainen applied to study at Tampere School of Art and Communication (TTVO), which used to be part of Tampere University of Applied Sciences.

After graduating with a degree in media studies and working for some time, he decided to continue his studies at the University of Tampere and study for a Master's degree, which in retrospect he calls one of the wisest decisions he has ever made.

“University studies were a kind of watershed in my life. It led me to public management and opened doors to civil service and other public administration jobs. The master’s degree naturally paved the way in terms of formal competence, but above all, the studies provided a variety of skills for working and on the changing world,” Parviainen says.

In addition to his main subjects, information science and game studies, Parviainen studied, among other things, communication sciences. He feels that his studies are still of practical use, for example, from the perspective of information management and digitalising society.

“I did not become a game researcher or an informatician. However, especially digitalisation issues have played an important role in my career, right up to my work in Parliament. It has also been an advantage to be familiar with information management and related structures. Doing things as an amateur is one thing, but having a deep academic understanding is another,” says Parviainen.

Parviainen has fond memories of his studies at TAMK and the close-knit group of students at the time, as well as of the wider community that university studies offered. He also finds the role of an alumnus rewarding and is happy to promote cooperation with the university, as well as between the cities of Hämeenlinna and Tampere.

“The University of Tampere was a good base for growth and development, which has left its mark on me and of which I feel proud. I had the opportunity to give the student’s speech at my graduation ceremony, and I remember mentioning that a graduating student has a network of paths in front of him or her in which it is easy to make progress with a solid foundation and a rucksack full of good provisions,” Parviainen reminisces.

Tampere is rough in a positive sense

Parviainen has weaved an interesting journey between his student years and current job. He was majorly involved in Tampere’s municipal politics and elected a Deputy Mayor at a very young age. He has also served as a Member of Parliament, on various committees of the Parliament, and as State Secretary at the Ministry of the Interior. The years have also included entrepreneurship, chairing the boards of Särkänniemi and Fimlab, and several international tasks.

Parviainen feels he has had the opportunity to do many interesting jobs over the years, and, along the way, unexpected doors have opened.

“A career is rarely a single path anymore. Life can take you down new and unexpected paths. My experience is that doors do open when you keep an open mind to the world around you. Working together with other people is important because opportunities often open up as a result,” he says.

Parviainen’s relationship with Tampere has remained warm over the years even though he has resided in Helsinki at times for work reasons and recently moved to Hämeenlinna with his family. The positive roughness of Tampere has always attracted him.

“It’s always nice to visit Tampere, and I also enjoy the results of projects that I have been involved in promoting. Fortunately, the distance between Hämeenlinna and Tampere is not much longer than that between East and West Tampere,” Parviainen points out smiling.