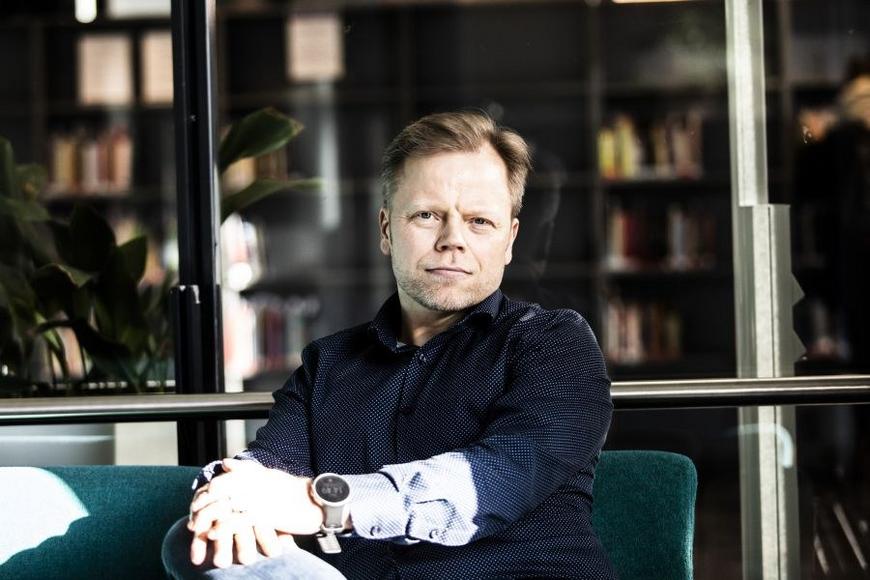 Juho Pirskanen, an alumnus of the Tampere Universities community, has already seen long-term developments in the field of radio and telecommunications technology. His career has meandered from 3G and 4G networks to 5G and, in his current job at Wirepas, he enables customers to use a wide range of wireless communication applications on even a massive scale. Among other things, the software produced by the company is used to monitor millions of electricity meters, control LED lights, improve the safety of construction sites, and increase the efficiency of cleaning services.

Juho Pirskanen, Principal System Engineer at Wirepas, a manufacturer of wireless telecommunication solutions, says that the path from studying engineering to his current job has been relatively straightforward even though the years have been eventful. Pirskanen, who completed his Master’s degree in telecommunication technology in 2000, is still working in a field that is related to his studies.

“The methods and technologies, such as processing power, have naturally come a long way in these twenty-odd years. During our studies, we did not read emails on the go while today people can send high-quality videos via high-speed data connections directly from ski slopes practically in real time. However, my studies are still useful because my work is based on the same basics and laws of physics that apply at a fundamental level. Working has meant constantly learning new things,” Pirskanen says.

Pirskanen, who hails from Kuopio, says that he applied to study at the Tampere University of Technology (TUT) because he was interested in physics and mathematics in upper secondary school.  A couple of TUT students also came to visit Pirskanen’s school and, based on their presentation, TUT seemed like a good option. Being a keen football player also attracted him to Tampere.

“I began studying electrical engineering at TUT in 1995 when there was a great upswing in the field, and I became really interested in radio and telecommunication technology. At the time eg text messaging in the GSM network represented the cutting edge of the field,” Pirskanen explains.

Pirskanen has fond memories of studying. The studies seemed to be genuinely interesting and he continued to play football in Tampere, eventually ending up playing futsal in students’ world championships and the practice matches of the Ilves football club’s first team. With fellow students, futsal took him to Netherlands and ice-hockey to Trondheim and Linköping. In addition, Pirskanen was a member of the organising team that brought engineering students’ Nordic ice-hockey championships to Tampere. They had even acquired a letter of greeting from Martti Ahtisaari, President of the Republic of Finland, which astonished the Swedes, Norwegians – and players from Helsinki.

He also went on an Erasmus student exchange to Stuttgart in Germany, which turned out to be very educational because he had only recently begun to study German at TUT.

“That was quite an exercise! I suddenly had to demonstrate my knowledge of the field of telecommunication technology to a professor in a one-on-one oral examination that was held entirely in German. However, since I managed to do it and passed the course, I have not had stage fright in meetings since then,” Pirskanen jokes.

From a large corporation to a rapidly growing start-up

Pirskanen began his career at the Department of Communications Engineering where he worked as a research assistant. In addition to working, he also completed his master’s thesis, which dealt with receiver architectures and signal processing in mobile phones. The thesis was part of a 3G research project led by Nokia.

“The work was interesting, and I also made a foray to doctoral studies, but then I gathered that I would never become a professor. I ended up working on 3G product development for Nokia Networks,” he says.

Pirskanen worked for Nokia and its subsidiaries for a long time. In addition to product development, he worked as Nokia’s chief representative in the 3GPP standardisation working group and travelled around the world in that capacity. For a few years, he worked in the patents department and assisted lawyers in patent analysis and licensing matters. However, collective bargaining and mergers and acquisitions also became familiar, and as a result, he started working for the Japanese semiconductor manufacturer Renesas and the American Broadcom. After Broadcom closed its operations in Finland in 2014, Pirskanen went back to working in research projects on 5G and standardisation for Nokia and wrote the book 5G for the Connected World with his colleagues.

In 2017, Pirskanen took a step towards the unknown by accepting a post at Wirepas.

“For some time, I had been interested in the start-up world and working in a smaller company. At that time, Wirepas already employed several old acquaintances from my time with Nokia, which made the transition feel natural,” Pirskanen says.

The Wirepas Mesh wireless solution developed by the company enables the networking of IoT devices on a massive scale. Application opportunities are widely found in various sectors of society including cities, buildings, industries, logistics, and the energy sector. The solution can be used to connect, control, locate and identify, for example, lights, sensors, indicator lights, meters, and a wide range of different devices.

“Our wireless connections are used to monitor the location of workers on building sites, the position of valves in industrial production, the change of hand towels at airports and to detect the service needs of a wide range of equipment. Sometimes we hear about pretty exotic uses, and we don’t actually stay completely informed on the purposes our solutions are used for,” Pirskanen says smiling.

In addition to working with clients, Wirepas is conducting research and development and, for example, the two-year 5G Force research project with Tampere University will soon be completed. The result is the novel radio communication standard DECT-2020, which the European standards organisation ETSI is proposing to become a member of the global 5G technology family. Pirskanen was the technical writer of a part of the DECT-2020 standard. This technology is expected to have very significant prospects and economic potential especially in industry and urban IoT solutions.

Developments in the telecommunications sector have been so rapid and multifaceted that getting an overall picture, let alone predicting the future, is very challenging. According to Pirskanen, for example, the much-talked-about Internet of Things is still in its infancy but is developing rapidly right now. It is possible to exploit the IoT technically for a wide range of purposes, but it is still unknown which of these opportunities will eventually be exploited or how this will change the way companies, people or even society operate in the years to come.

“We engineers create solutions for communication and information sharing but cannot decide how the solutions will ultimately be used between people and devices. That is always up to the users,” he says.