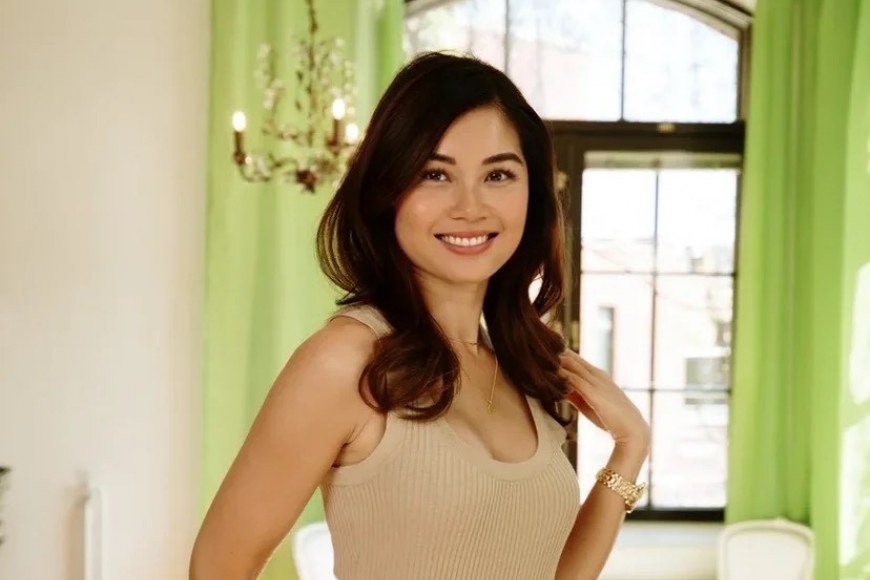 Kelly Keodara is a Tampere University alumna who completed her Master’s degree in Media Education in 2020. She now works as Marketing and Communications Manager at Patria Systems in Tampere, as the first international and the first woman to work in the unit. In her leisure, she serves as Tampere City Ambassador and has also founded the Bloom association, a dedicated community and meeting place for internationals and locals in the city.

Kelly Keodara’s working days at Patria consist of everything marketing and communications. She is the only communications person in the team so she plans and creates contents for a variety of materials, such as brochures and magazines, as well as arranges events and video shootings and works in close cooperation with the company’s sales team.

Kelly’s position at Patria Systems is rather unique. She is not only the first international to work in the team, but also its first female employee. Kelly says she had little previous experience in the aviation industry but admits to having a bit of a passion for it. Getting the position in the company was no easy matter of course, however – Kelly really worked for it.

"At the time of my graduation in 2020, I first worked for a start-up that went through financial instability. After my time there, I felt quite desperate trying to find employment. I applied for positions I felt I qualified for and also ones I did not. Patria’s job posting was one of the rare ones to be fully in English, but at the very end it said that fluent Finnish was required. I felt so frustrated, but I’m glad I didn’t give up. My determination finally paid off and I ended up being hired," Kelly says.

The employment has turned out to be a nice match for both Kelly and the company. Kelly now also gets to practise her Finnish as much as she wants and the other unit members get to use English with her. It is a welcome learning opportunity for both, as the company has a strong international focus.

Originally from North Carolina, USA, Kelly Keodara first came to Finland and the City of Rauma in 2015. At the time, she held a Bachelor of Arts degree in Media Studies and started working as a business English teacher for technology companies and adult education centers. In 2017, she started her Master’s studies in the English-language Media Education program in Tampere.

"I had wanted to complete my Master’s and the time was right in 2017. I knew I wanted to study something to do with media and I had developed a passion for education back in Rauma. When I came across the Media Education program offered at Tampere University, it sounded right then and there," Kelly says.

Kelly found out that only 10% of the applicants were admitted, however, so she felt unsure about getting in. She feels that the motivation letter required in the application process may have been the decisive factor in her being admitted.

"I must say that I really poured my heart into it, so the determination must have shown," Kelly recounts smiling.

Having an international background, Kelly has had the chance to compare higher education in Finland and the United States. She feels that the methodology applied at Tampere University allowed students to think more for themselves and gave room for self-motivated learning.

"I really liked the way that classes were conducted, it felt much more casual and friendly than back in the US. I actually felt a bit funny calling our professors by their first names, that’s something we would not do in the US. I believe that the relaxed atmosphere helps learning as the more comfortable you feel in class, the more you learn as you feel comfortable taking part in the conversation and asking questions about anything unclear," Kelly notes.

Kelly also commends the ‘learning by doing’ method applied in the studies. Their small group of approximately 10 students in the program went out and had the opportunity to really explore the region. They went to classrooms and observed education and learning first-hand. As the group was so small and many of the other external participants were Finns, Kelly also had the opportunity to network with locals. She has kept in touch with many after graduation.

Kelly Keodara is one to love Finland and its culture whole-heartedly. She finds that Finland truly has something different and special to offer. For her, some of the best things in Finland include having a sauna, wandering in the woods and walking up to the Pyynikki Tower to have a delicious munkki.

"Having a sauna gives you the best feeling! The Kaupinoja public sauna is one of my favorites. What I also love about Tampere, and Finland in general, is nature. I live in the city center but it only takes a few steps and you’re right there in nature. I also like to go out rowing with our own rowboat in Rauhaniemi," Kelly says.

Therefore, it is only fitting that Kelly has also been Talent Ambassador for the City of Tampere since September 2020, helping the city attract and retain internationals.

"Retention, in particular, is a challenge as international students tend to move away after their graduation and many non-Finnish employees leave the country after their assignment. This is why I founded Bloom, to try and build a bridge between internationals and locals through means such as empowerment, soft skills training, networking events, and so forth. Our aim is to provide a low-threshold peer-to-peer system," Kelly notes.

In her community of both local Finns and internationals living in Finland, Kelly has found the first step to be the core problem. Locals want to interact with internationals and vice versa, but often people just hesitate about how to get started.

This was the main reason Kelly launched the Bloom association in November 2020, dedicated to building a community where both internationals and locals can thrive together. Bloom Space opened in Kehräsaari in spring 2021 and it also has a virtual space. The community offers a local living room, ‘a home away from home’, for anyone in need.

As for herself, Kelly has no detailed plans for the future but is determined to stay in Finland and keep building the community anyway she can.

"What I have found is that opportunity comes along as long as you work hard and stay determined. Real life is not all sparkles and joy – I must say that I’ve had many struggles in between. But I guess it all comes down to being determined and finding your own way, even against the odds. My advice to anyone hesitant about their future is to just be brave. It pays off to take the road less traveled, and you’ll likely be paving the road for those coming after you."