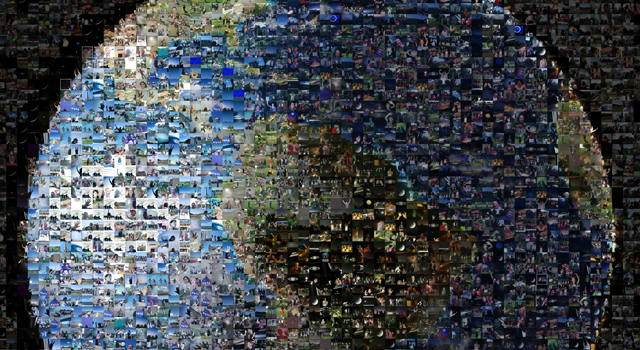 Is the global truly as universal as the photograph of the earth from space would suggest? Five, leading, international scholars — from departments of sociology, education, geography, law, and history — visited Tampere in April and May to discuss how “global” is constructed and what that tells us about the “local” where and when the construction takes place.

There is no place called “global” (Qadir 2016). We can’t get a visa to visit “global,” or go to an office in “global,” or even buy a “global” souvenir. In fact, “global” only exists when we invoke it, and that invocation is inevitably local. Moreover — in our age of increasing consciousness of the world as a single place — “local” is also, typically, invoked in the context of “global.” More and more, we think of our place as one of many such places on earth. In this discursive sense, global and local are deeply entangled. This point is well recognized by varieties of “glocalization” studies (Roudometof 2016). Indeed, already almost 20 years ago there was a recognition that global culture cannot be conceptualized simply as a scaling up of national culture, which is bound to the state and to homogeneity (Featherstone 1990, Robertson 1992). Considerable research since has explored the interstices between the local and the global (e.g. Alasuutari 2016).

Yet, we tend to still the think of the global in terms of the image of the earth, i.e. as a generative frame of unity within which local variations can be mapped. But is the global truly as universal as the photograph of the earth from space would suggest? What are the politics of knowledge that have constructed the global, and continue to do so? What implications does this construction have for knowing and hearing the Global South or East, or alternative epistemologies? How should we think about temporality in the idea of the global? Insightful new research has begun to question the construction of “global” from postcolonial perspectives (e.g. Mignolo and Escobar 2010).

The New Social Research Program (NSR) and Tampere research network for Global & Transnational Studies (T-Global) explored these questions in a unique series of events in Spring 2019.  T-Global members coordinating the series were Ali Qadir (TCuPS), Nelli Piattoeva (EduKnow), and Jouni Häkli (SPARG). Five, leading, international scholars — from departments of sociology, education, geography, law, and history — visited Tampere in April and May to discuss how “global” is constructed and what that tells us about the “local” where and when the construction takes place. The lecture series was also organized as a multi-disciplinary course involving undergraduate, postgraduate and doctoral students from three faculties: Social Sciences, Education, and Management & Business.

The series kicked off with a lecture on April 26 by Professor Daniel Tröhler (University of Vienna, Austria) on globalization and education. Professor Tröhler spoke on Claims of universalized nationalism and banal nationalism as resistance, an informed critique of “World Society Theory” tradition in comparative education. His point was that by considering just the “front stage” of new, global pathways of homogenizing and standardizing after the Cold War, such globalization theories overlook the “back stage” that includes growing nationalism. Tröhler underscored the fact that nationalist sentiments and epistemology have not only remained but must be recognized in education policies, echoing his earlier work on languages in educational formation (Tröhler 2011). His talk thus presented a trenchant critique of what might be termed methodological globalism, and an active discussion ensued regarding the limits and intersection of global and national perspectives.

On April 30, the second lecture in the series was delivered by Professor Yasemin Soysal (University of Essex, UK) on globalization and higher education. Her talk, “Global Citizens or Global Individuals? Educational Migrations of Chinese Tertiary Students” contextualized the subject globally (c.f. Soysal 2015). Professor Soysal opened up the history of Chinese university student migration to the point today where one-fifth of globally mobile students are Chinese, enrolled in more than 100 countries. To discuss this, she described higher education as an isomorphic transnational organizational field that encourages viewing universities as “formally standardized and comparable, so able to create excellence aspirations,” and students as “bearers of these aspirations and orientations.” Soysal showed how the attitudes of Chinese university students in different destinations are in fact similar in terms of their motivations, self-agency and individuality, global social consciousness, and national pride. Aspirations, in this sense, are constructed in a globally informed way.

The third lecture, on May 3, was delivered by Professor Neilesh Bose (University of Victoria, Canada) on postcoloniality, religion, and India. His talk, “Reconciling religion in histories of globalization: India in and of the world” made an argument for global intellectual connectivity, and for recognizing global interconnectedness in tracing local histories. Drawing on his ongoing research (Bose 2014), Bose discussed attempts by famous 19th century Indian intellectual Rammohan Roy to define universal religion from an Indian perspective. The talk described how Roy’s efforts led to the group Brahmo Samaj, which in turn was picked up as a representative of Indian religions as origins of world religions, and cemented into modern conceptions of universal religion. The discussion after the talk picked up on how religion is typically defined in India and elsewhere from a Western, Protestant Christian perspective and in close dialogue with European intellectual currents.

The following lecture on May 8 was delivered by human geographer Dr. Alex Jeffrey (University of Cambridge) on Decentering international law: Enacting war crimes trials in Bosnia and Herzegovina  (BiH). Jeffrey’s talk focused on “the agency of individual humans in recasting the trial in new terms” by referring to the theatricality of the public suicide of former Bosnian Croat general Slobodan Proljak at the Hague. Jeffrey drew on his earlier work of the state being enacted (Jeffrey 2012) to turn his attention in the talk to how the law is “situated,” highlighting the role of locations and architecture as spaces of performance and contestation in the trials. Jeffrey’s talk also discussed the role of international networks as challenges and opportunities in the possibility of transitional justice. In this way, he described how the law was being communicated in a myriad of ways, and how international legal institutions could be applied in consolidating post-conflict states. Considering the embeddedness of legal process in social and political life, he ended by attending to the role of legal institutions in producing political subjectivity.

The final lecture in the series was delivered by Dr. Tom Griffiths (University of Newcastle, Australia) on Recentering a Decentered Global. Griffiths’ talk investigated de-centered educational policies around the world and made a case for re-centering them in a World Systems Analysis perspective (c.f. Griffiths and Arnove 2015). He balanced the apparently self-evident idea of ‘developmentalism’ in several international treaties — where inclusive and equitable quality education for all is asserted — with violent and unequal interventions in the name of “developmentalism.” He thus showed how inequality has increased in de-centered ‘developmentalism, and argued that the theory of human capital and its use in educational policies is one reason for that. Griffiths argued for a re-centered critique of developmentalism, human capital theories, and neoliberal capitalism by seeing the globe as a single world system. Griffiths ended his own lecture as well as the lecture series by quoting Stetsenko: “we cannot locate ourselves in the present and its history unless we imagine the future and commit to creating it.”

Alasuutari, Pertti. 2016. The Synchronization of National Policies: Ethnography of the Global Tribe of Moderns. London: Routledge.