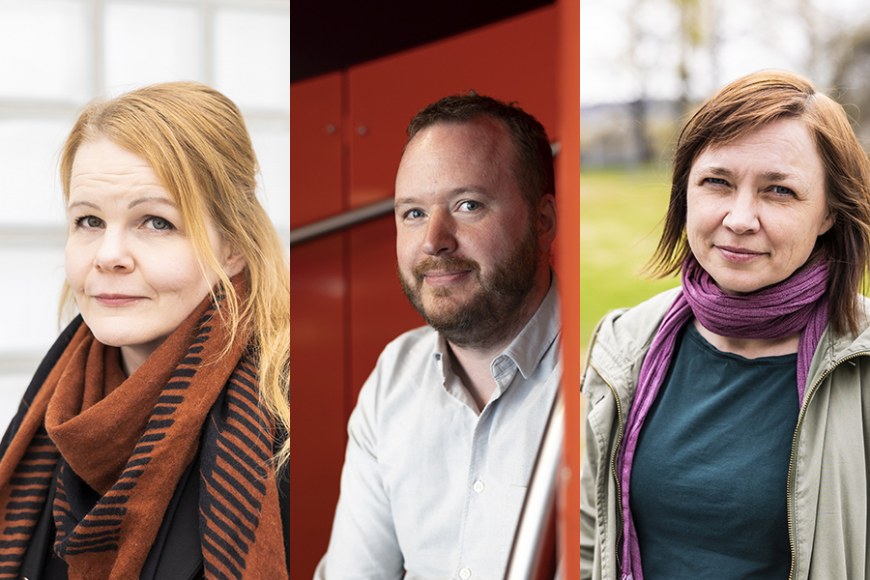 The majority of Finland’s and the world’s populations live in urban areas, meaning that cities of different sizes play a key role when answers to sustainability challenges are sought. At the same time, cities crystallise a key challenge for the future. For cities to provide safe and sustainable places to live in the future, the lifestyles, institutions, and infrastructures implemented in them must change.

Urban environments need sustainability breakthroughs. Climate change, the loss of biodiversity, diseases and inequalities require swift solutions, but there is still some time for action.

STUE’s aim is to create research-based solutions to promote sustainability breakthroughs. The profiling area creates a framework for multidisciplinary research where researchers from different faculties at Tampere University come together to work on sustainability issues. STUE also aims for having strong societal impact and close stakeholder cooperation.

Professor of Social Policy and Director of STUE Liisa Häikiö appreciates the significance of the recent recruitments.

“We are delighted to have assembled a distinguished group of Associate Professors. I look forward to further strengthening Tampere University’s multidisciplinary research on urban sustainability. This allows us to provide even stronger support for the renewal of science and society,” Häikiö says.

Rannila is interested in social sustainability to which she applies a Nordic standpoint.

The question is whether people can lead a meaningful urban life so that they do not have to suffer from poverty, inequality, or insecurity.

“We get the best results if we widely combine various aspects of sustainability. After all, people need to have a meaningful living environment and basic well-being to be able to live and contribute to sustainability. That is why we need to pay attention to social sustainability,” says Rannila.

She says that it is not enough if citizens’ engagement in their own local environment just fulfils the letter of the law. Inclusion cannot be achieved by top-down regulation only.

In a project funded by the Kone Foundation, her research team focuses on everyday democracy.

“Democracy should not require active citizenship, such as going to meetings to express one’s opinion on urban development. Most people do not necessarily have the capacity to do that. Participation can stop because of lack of information or the experience that one’s arguments are unwanted,” Rannila says.

“Our research team strives to identify situations that hinder or promote inclusion in one’s living environment,” she adds.

One of Rannila’s interests is justice and its manifestation in cities, for example, in public spaces. Disputes over public space are an interesting reflection of what people value. Questions of the right to re-purpose an empty space or to use public spaces differently are also frequently raised.

As part of the Ministry of the Environment’s Suburb Programme, Rannila and her team are researching, among other things, factors that cause marginalisation, and the status and development of suburbs in a project called The Right to Suburban Space. The project wants to raise awareness about suburbs.

“Our goal is to broaden the concept of the city so that the suburb is not seen as an exception. Suburbs should be continuously developed; not just when problems occur. Most people live in suburbs, meaning they are very significant everyday environments,” Rannila points out.

Rannila believes that STUE will open more opportunities for cooperation that would be difficult to achieve without profiling. She believes that any thinking about the future of cities begins from multidisciplinary.

Rannila recently set up the JUSTSPACES network (Research Network for Justice, Space and Society) which promotes socially sustainable urban transformation by the means of research.

In 2006, Helena Leino earned her doctorate with a dissertation on the dynamics of citizen participation in town planning. In her academic career, she has worked as a university lecturer of environmental policy at the Faculty of Management and Business at Tampere University. Leino has researched land-use planning especially from the perspectives of democracy and transparency.

Leino finds that the greatest challenges begin when environmental policy is put to practice.

“I am interested in the implementation of sustainable policies in cities. Many sustainability commitments are made at the global level, but how do you translate them locally? People’s behaviour needs to change for cities to meet the deadlines they have set for carbon neutrality and curbing climate change,” she says.

Leino has led several research projects, including the Academy of Finland’s Strategic Research Council project Dwellers in Agile Cities (2016–2019) and other multidisciplinary consortium projects funded by the Academy of Finland and Business Finland. The projects have implemented various co-creation methods through action research in the Tammela and Hiedanranta neighbourhoods of Tampere.

“The aim of research should be to advance scientific debate and influence society. This is natural for environmental policy research,” Leino emphasises.

Influence is based on building diverse networks. When researchers know the problems urban planners or ministries are grappling with, they can think of solutions.

Leino finds it important that research takes a critical look at policy-making practices. Changes always require political decisions. Once the decisions have been made, changes must actually be implemented.

“I am a bit sceptical about the way change is often just built on project-based thinking. Projects expire and they do not always grasp that our current way of life is entirely unsustainable,” Leino says.

She has issued expert opinions for parliamentary committees, written policy recommendations and participated in the evaluation of various national strategies.

Without resorting to preaching or pontification, Leino bluntly says that each of us must change our lifestyle.

“Does our well-being depend on us consuming everything we are consuming? If we want to make the globe sustainable, we must understand that our overconsumption is drastic. I hope that we can make sustainable solutions and reduce the consumption of natural resources,” she mentions.

Leino takes Tampere’s tramway as an example of impactful and sustainable urban policy. This warms her heart because she is an optimist underneath.

“We just need to find large-scale solutions. People should also reduce their personal consumption and, for example, flying,” she says.

“The profiling strengthens the means to argue the need for sustainable urban change,” Leino says.

Jonathon Taylor, Urban Physics: “The sum of our contribution in STUE is impact.”

Jonathon Taylor works as an Associate Professor in Urban Physics at the Faculty of Built Environment at Tampere University. He has a BSc in Biological Sciences from Simon Fraser University in his native Canada, and a BEng in Geomatic Engineering and a PhD in Environmental Building Science, both from University College London, UK.

Taylor’s research interests are in healthy and energy efficient housing that combines building physics and Geographic Information Systems to evaluate population-level exposure to various indoor environmental health hazards. His areas of expertise are indoor air quality and pollution and their impact on human health.

In his studies, Taylor has, for example, modelled the air pollution and carbon dioxide emissions that come from households which burn fossil fuels.

“For me, the biggest challenges are climate change, biodiversity loss and other emergencies where we need to be acting really quickly. Otherwise, we will face some significant consequences for our planet as well as our own health and well-being. These things are closely related,” Taylor states.

Jonathon Taylor has set his sights on discovering how we could make buildings healthier for people and better for the climate. Currently Taylor researches indoor air quality, disease transmission risks, indoor heat and cold exposures, and moisture in the built environment.

Previously, Taylor worked as a lecturer in the Sustainable Urban Development (SUD) degree programme. Now in the framework of STUE, he will take a more strategic role in finding research funding. However, he still likes teaching and hopes to be affiliated with the SUD programme also in the future.

Taylor is one of the more than 120 leading experts from around the world who contributed to the sixth Lancet Countdown report. The report collected information and future visions on global health and climate change. The collective called for urgent action to integrate climate change mitigation into COVID-19 recovery plans.

He sees benefits in STUE profiling area’s multidisciplinarity and opportunities to work with various research groups.

“As researchers, we can do calculations and estimate how certain changes could help to form sustainability. However, we also need to understand politics and political processes and, most importantly, people’s behaviour. In this sense, the multidisciplinarity of STUE profiling area is an advantage which cannot be properly achieved by any single field of science,” Taylor points out.

“The sum of our contribution in STUE is impact. By working together, our research work is holistic and has societal impact,” he says.

Interaction with the wider society is one of the core elements of STUE. Taylor also thinks that the proposed sustainability advice needs to be applicable in the city.

“In academic settings, I may calculate how many lives would be saved if the entire vehicle transport was removed, but then again, that is not realistic to achieve in everyday life. To get an understanding on what is possible in urban environments, feedback from the public on the ground is also important and helps to bring more reality into those calculations,” he says.

According to Taylor, societies have still more to go if we want to meet the carbon neutrality goals.

“However, I think there is ambition to make it happen, Change only needs to accelerate a little faster.” 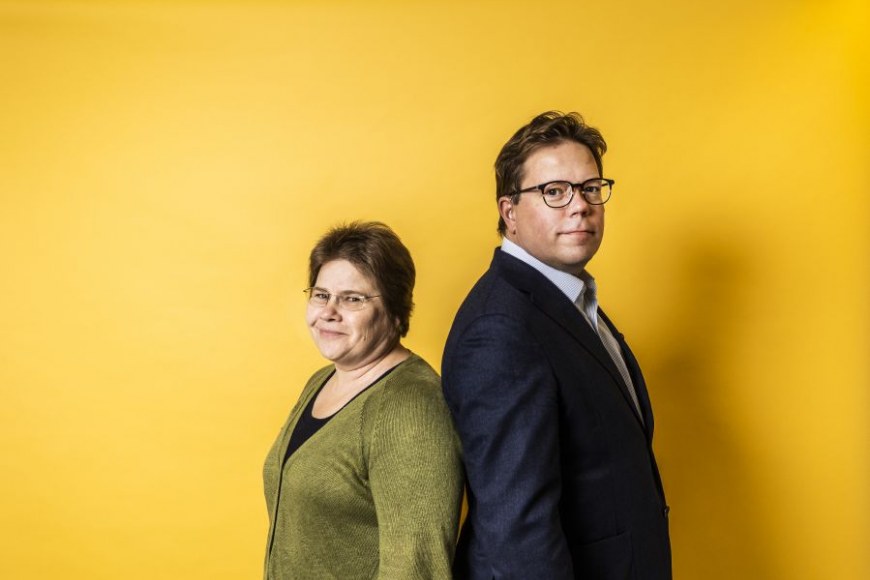