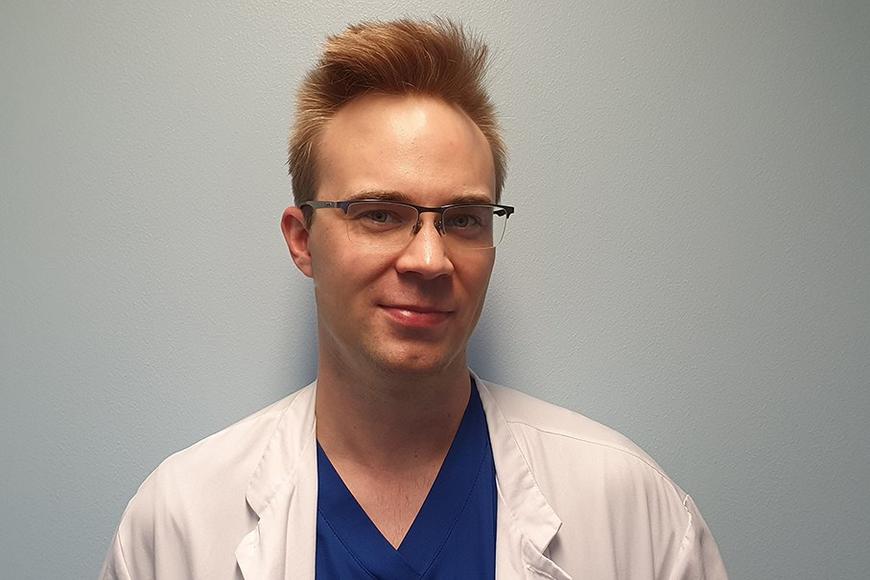 Patient imaging plays an essential role in the examination of rhinologic patients along with clinical examination methods. The aim of the doctoral dissertation of M.D. Olli Valtonen is to examine the applicability of patient imaging in both the virtual and printed 3D modelling of the nasal cavity and the paranasal sinuses. An additional aim is to study whether imaging-based 3D models can be used for studies modelling the nasal cavity airflow.

Patient imaging plays an essential role in the examination of rhinologic patients along with clinical examination methods. The most common imaging methods, computed tomography (CT) and cone beam computed tomography (CBCT), are readily available and provide a good perception of the bony structures, mucous membrane and air space in the nasal cavity and the paranasal sinuses. However, the scans are primarily used by observing consecutive two-dimensional single scans.

Due to the complex anatomy of the nasal cavity and paranasal sinuses, the use of the traditional image method presents challenges in obtaining a realistic perception of the three- dimensional anatomy of the nasal cavity and the paranasal sinuses. Thus far, the few experimental studies on the three-dimensional modelling of the sinonasal structures have been based solely on clinical CT scans.

The dissertation is based on four studies in which CBCT scans served as the basis for all measurements and procedures. In study I, 72 patients with CBCT scans prior to and at twelve months after maxillary sinus surgery were included. These patients had undergone uncinectomy or balloon dilation due to chronic rhinosinusitis.

In study II, five patients with sinonasal CBCT scans were selected and one patient in study III. These patients had symptoms of chronic nasal congestion and had had no prior sinonasal operation.

In study IV, 26 patients with CBCT scans prior to and at twelve months after inferior turbinate surgery due to chronic nasal congestion were included. All the studies in the present dissertation examined the CBCT-based virtual 3D modelling of the nasal cavity and the paranasal sinuses. In addition, the CBCT-based sinonasal modelling in 3D prints was examined in studies II and III, and the 3D prints produced were also CBCT scanned for comparison.

The results showed that the measurement of the maxillary sinus air space volume using virtual 3D modelling was more precise than the CT-based scoring methods of mucous membrane thickness used today. In addition, volumetric measurements of the nasal cavities and the maxillary sinuses as well as the cross-sectional areas of the nasal cavities had statistical correlation with patient symptoms assessed with SNOT- 22, VAS and GHSI questionnaires. The cross-sectional area measurements of the nasal cavities also had correlation with the results gained from acoustic rhinometry. Excess artefacts in the patient scans induced by, for example, dental implants were observed to cause difficulties in producing virtual 3D models from the scans.

The produced 3D models were, however, found to be good representatives of the original patient anatomies. Moreover, the printed 3D models were applicable to produce realistic rhinomanometric results. The CBCT-based 3D models were also found to function well as good and close to clinical CT quality bases for particle image velocimetry (PIV) measurement and computational fluid dynamics (CFD) calculation studies modelling the airflow in the nasal cavity.

In the dissertation, it was concluded that CT scans proved to be applicable for measuring the volume and cross-sectional area of the nasal cavity and paranasal sinus air space as well as the 3D modelling of the sinonasal air space. CBCT scans are also sufficient to produce accurate and comparable 3D flow measurements and models that are close to the previous study models based on clinical CT scans. Thus, sufficient accuracy for 3D models and flow measurements can be achieved with CBCT, which induces a lower radiation burden to patients than clinical CT.

According to the findings of the present studies, patient scans can be used for notably more profound data acquisition for rhinologic assessment, although the 3D modelling process and analyses need to be more automated.

The doctoral dissertation of M.D. Olli Valtonen in the field of Otorhinolaryngology titled Enhanced Use of Sinonasal Patient Imaging for Three-Dimensional Applications will be publicly examined at the Faculty of Medicine and Health Technology of Tampere University at 12 o'clock on Friday 29 October, 2021. The venue is Arvo building auditorium F115, address: Arvo Ylpön katu 34. Docent Karin Blomgren from University of Helsinki will be the opponent while Professor Markus Rautiainen will act as the custos.