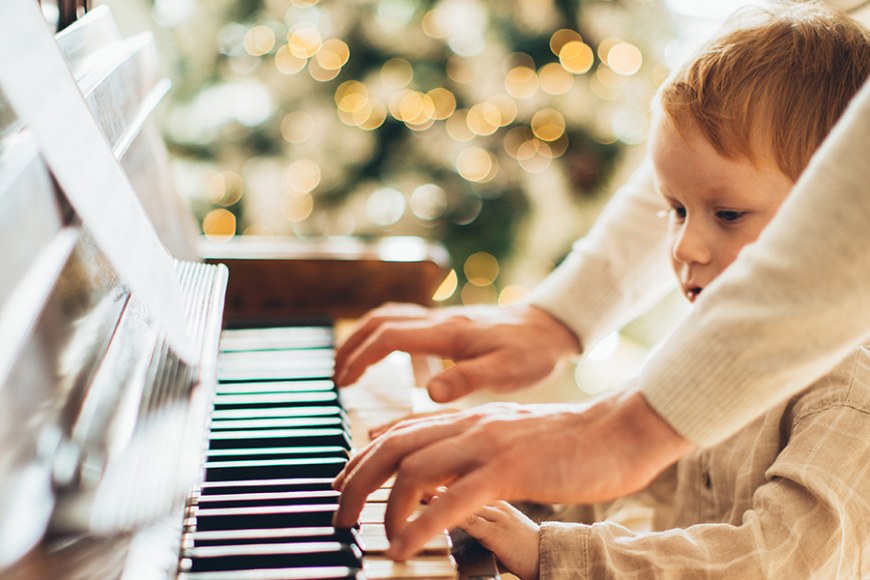 Music is not just about singing and playing but about interaction and well-being – the building blocks of humanity. It is shared experiences and interpretations of emotions. Music is an important part of our shared cultural heritage – including Christmas music whether you like it or not.

A song comes on the radio that you had forgotten existed. Suddenly you remember vividly what it was like in the disco at the youth club that very night, what the warm southern night smelled like, or what the light looked like in the living room of your childhood home. For a resident with memory problems in an elderly care facility, the melody of a hit song from her youth brings back forgotten words. Small children try to sing songs even when they do not know how to speak yet.

“Music reaches the most primitive layers of the brain directly. It is universal and global, and all human communities throughout history recognise this fact,” says Kaarina Marjanen.

“The magic of music is that it evokes emotions, brings comfort and memories and opens important doors to the integrative world of the imagination. Music is a resource that builds humanity at the individual and community levels. Through it, children learn how to interact, how to care for others, and how to be human,” Marjanen continues.

Music has an impact even before birth

Marjanen is University Lecturer in music education at the Faculty of Education and Culture.

“I was originally trained as a kindergarten teacher, then as an early childhood music teacher and after that as a music teacher. As aspects of music education and relevant to the perspectives of my postgraduate studies, I also learned about music therapy, the psychology of music and music medicine. I have played the piano since I was four. Later, my main instrument changed to singing, and now I combine both in my music. As a music teacher, I naturally play several instruments because that enriches education. Thus, I look at pretty much everything through the musical lens in my mind,” says Marjanen.

Music has a huge impact on human development. It seems that prenatally experienced music has even more effect than postnatal musical experiences. Even after birth, music can influence personal development such as interaction skills. According to Marjanen, we might not learn to speak without music.

“In music and other education, music is understood as interaction. At the individual level, it means internal interaction processes as bodily and emotional processes intertwined with cognitive processes. At the community level, the interactivity and dialogicity of music is easier to understand as it implies shared, common experiences, activities, and moments,” Marjanen explains.

In music education, music is not only understood as the sound produced by instruments or singing, which is how music is understood in layman’s terms.  Music can also be other sounds that bring pleasure, such as the sounds of nature.

“It also makes no difference whether the music is Mozart or metal. What matters is that you enjoy the music and it is meaningful to you regardless of the genre,” says Marjanen.

Investing in music pays off

Kaarina Marjanen is concerned about the quality and quantity of music education in Finnish schools. She also believes that music should not be confined to music lessons but would greatly benefit education in general.

“We know that investing in music resources pays off. In music, one plus one equals three, but to get there you need to create proper learning environments. We are also considering these issues together with TAMK’s music education programmes and other music networks,” she says.

“Music is built into people. That is why music – and other arts and crafts – should be used at all levels of education and in all learning, from history to mathematics and environmental education. The many dimensions of music are explained in the Vision 2030 for Finnish Music Education,” Marjanen points out.

Kaarina Marjanen’s latest interest is Multisensory Musical Design (MMD), on which she  recently published an article. A couple of other articles are also pending publication.

“Using the Multisensory Musical Design model, I describe the universal human power and intensity of music as part of individual and collective cultural formation, well-being, and learning. The power of music is based on the elements of music, which also underpin language and other forms of arts and skills education. Music as a phenomenon is eternal; it is flowing through time, space, and faces, referring to the encounters that are creating a link between people and cultures. Music is a channel for emotional expression already or even when speech is not an option,” Marjanen notes.

“In the MMD model, I open up why music is an essential and indispensable element of all education and training, and how it can be used to broaden and deepen the formation of knowledge, understanding of humanistic values and the meaning of face-to-face encounters,” explains Marjanen.

Happy tip tap or not again?

At Christmas time elves dance, snowbanks are high, and mangers are built on radio and television and in grocery stores, homes, and cities. Concerts and carol sing-alongs abound. Some are allergic to Christmas music while for others, it brings the very feeling and atmosphere of Christmas and perhaps a few tears to the eyes.

“Christmas music also plays on many levels of our brains and minds. Christmas music combines so many factors: the listener’s relationship with Christmas, one’s own experiences and memories, and, for example, attitudes to spirituality or religion. That is why it often arouses powerful feelings,” says Marjanen.

She hopes that we can relate to it and to each other with tolerance and understanding regardless of our own relationship with Christmas music.

“Christmas music is an important part of our cultural heritage and a great uniting tradition. It is a heritage of values passed down from generation to generation and cultural capital that must not be forgotten,” says Marjanen.

When Christmas stress hits you, it is worth remembering the magic key of music and putting on some Christmas music – or any other music you like.

“Singing, making music, talking, spending time together and eating well make you forget the dust bunnies that may be left under furniture,” says Marjanen.

“I hope that everyone can remember their own relationship to music, for example, by recalling a beloved song and the good associations and images arising from it,” Marjanen adds.

Listen to Kaarina Marjanen’s song on YouTube called Wrapped in Love that describes her thoughts on the meaning of music.