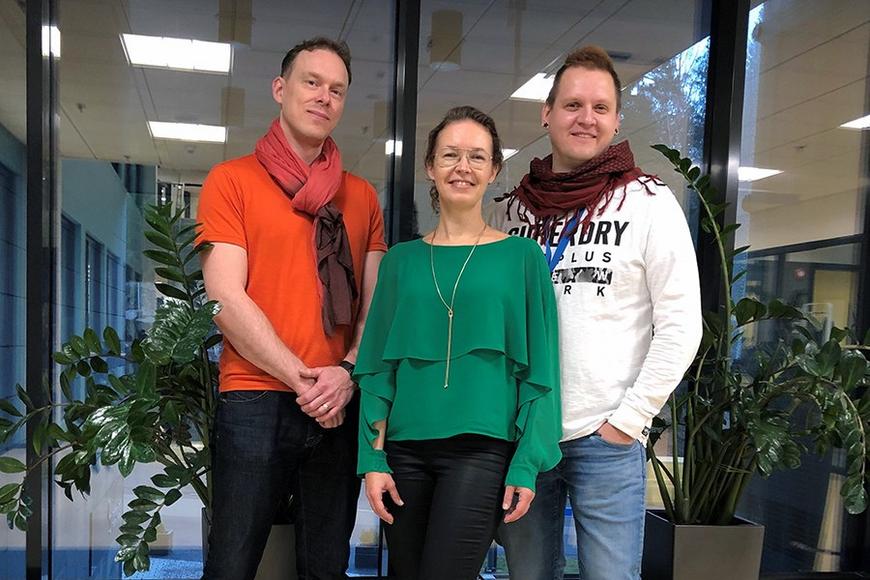 Researchers at Tampere University are launching a project to harness the power of light to manipulate cell behaviour. Their futuristic approach holds promise for new discoveries in cell technology.

The research project headed by Professor of Chemistry Arri Priimägi recently received the second grant awarded by the Emil Aaltonen Foundation to support cross-disciplinary research at Tampere University. The grant is worth one-third of a million, or €333,333.

“As photomechanical cell manipulation is still largely unexplored, the existing body of knowledge in this field is limited. As we are among the pioneers who are leading the way in this area, we are grateful that the Emil Aaltonen Foundation recognised the potential of our project,” Priimägi says.

Early this year, Priimägi received an award from the Academy of Finland in recognition of his scientific courage and achievements in developing light-controlled materials.

“Light is a diverse tool and utilised in a variety of technologies, such as modern telecommunications. Many medical devices are also based on light. Light is an enabling technology that is virtually ubiquitous but in many cases behind the scenes,” Priimägi points out.

Focus on the physical phenomena of cells

The new research project explores uncharted territory in more ways than one. Academy Research Fellow Teemu Ihalainen says that for him the project marks a step in an unprecedented direction. It combines the expertise of Priimägi’s group in light-controlled materials with the expertise of Academy Research Fellow Soile Nymark’s group in the areas of cellular electrophysiology and electrical signalling and Ihalainen’s group in mechanobiology and cell-material interaction. Postdoctoral Research Fellows Chiara Fedele and Elina Mäntylä, along with two doctoral students who will be hired in early 2020, will be the primary researchers in the project.

“The project brings together people with different fields of expertise. This unique combination of skills allows us to explore a whole new avenue of research,” Ihalainen says.

Arri Priimägi says that the physical phenomena that occur within cells are the subject of intense scientific interest worldwide, but few studies employ light in the process.

“Cellular mechanics and electrical phenomena play pivotal roles in all cellular functions, and related abnormalities are the underlying cause of a number of diseases. A more in-depth understanding of these mechanisms could potentially lead to new treatments in the future,” Priimägi says.

The researchers will not be using light to carry out clinical research or human testing. Instead, they will be studying cells in different light-responsive materials.

Priimägi says that a specific wavelength of light is, in principle, capable of penetrating the human body. One only needs to develop a material that reacts to a particular colour of light, so that light is able to travel deep enough without damaging human tissue.

“There is still a long way to go before light-controlled robots can be placed inside the human body. Our current goal is to develop cellular models to uncover the opportunities and limitations of light in this context.”

Priimägi says that the researchers are looking to set up a demonstration where cells could be manipulated with the help of the signals they produce, so that feedback between the cellular response and the material motion would control the robot.

“In 2017, we published a research paper presenting an optical flytrap that closes around specific objects. The flytrap contained a light-controlled robot capable of distinguishing between objects based on the light they scatter. Now we are looking to apply the same concept in the context of biological materials. I admit it is an ambitious goal,” Priimägi says.

The team of researchers believes that the results will hold promise for new discoveries in tissue engineering. Future applications could include, for example, artificial blood vessels that are able to constrict, bioactive plasters that promote wound healing, and engineered tissue transplants with the ability to contract like muscles.

“Artificial blood vessels that are capable of constricting are such a futuristic proposition that we will not have a chance to look into them further during this project. What we will be doing is creating a new research platform, but we need to accumulate more research data before we can begin to understand its full potential,” Priimägi says.

Teemu Ihalainen says that researchers have been manipulating cells with light before, but the concept that brings together light-based manipulation with soft material/cell combinations is new.

“Researchers who specialise in optogenetics can regulate, for example, the expression of certain genes with the help of light in a laboratory environment, but we are looking to utilise light to manipulate biomaterials that contain cells. This type of soft robotics represents an extremely intriguing approach, because it allows us to concretely combine synthetic biology with materials engineering,” Ihalainen says.

As far as Ihalainen knows, similar research is not carried out anywhere else in the world.  However, he suspects that the idea is not entirely novel as innovations are seldom born in a vacuum.

Ihalainen estimates that the researchers will be able to combine biomaterials with cells during the three-year project but translating the concept to clinical applications will take at least a further 10-20 years.

The team of researchers believes that light-manipulated soft materials have the potential to become an important element of tissue engineering in the future. At this stage, their primary goal is to increase our understanding on the related phenomena and map out the opportunities offered by light-based tools.

“At some far point in the future, it might be possible to use a light-controllable artificial blood circulation system within tissue transplants grown in the laboratory. The challenge now is that it is often necessary to create an actual circulatory system inside a tissue transplant to deliver oxygen and nutrients to the transplant and remove carbon dioxide and metabolic wastes,” describes Teemu Ihalainen.

The researchers are examining the potential future applications of soft robotics for tissue engineering. Several research groups in Tampere have a substantial history of studying tissue engineering and transplantation. Soile Nymark’s research group, for example, is involved in major collaborations both nationally and internationally that study the retinal pigment epithelium (RPE) in the eye with a goal to replace damaged RPE tissue with healthy tissue. Examples of other types of tissue transplants include the replacement of damaged skin or bone or even nerves in the spinal cord.

“We still need to remember that researchers are a long way off from growing complete and functional organs in laboratory conditions,” Ihalainen says.