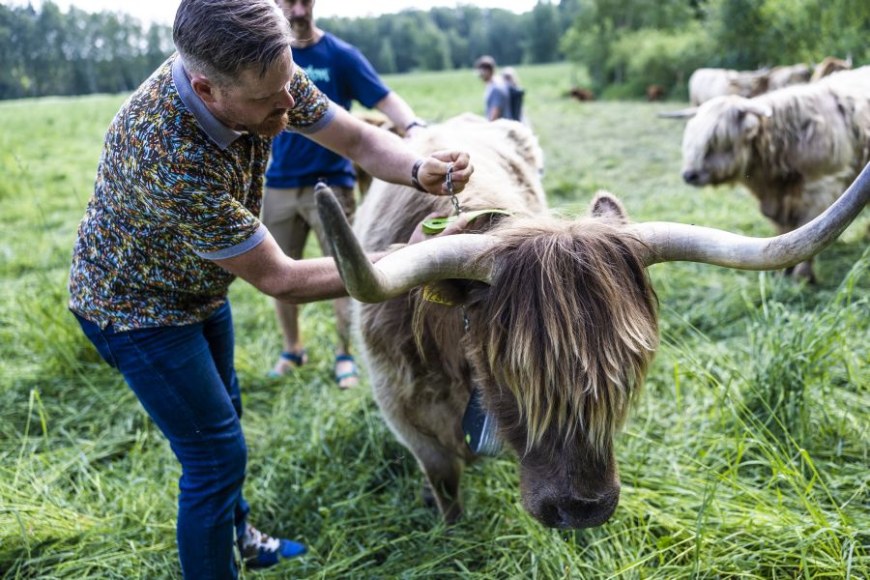 Regenerative farmer Philipp Mayer is fitting the test cow Meeri with a GPS collar that forms part of the virtual fencing system. Mayer says that Meeri learned quickly that once the collar plays an audio warning to indicate a virtual boundary, she needs to change direction. Otherwise, the animal gets a small electric pulse that is significantly milder compared to traditional electric fences.
Researchers at Tampere University are developing a device that harvests kinetic energy from animal movement and converts it into electricity. One potential application for the technology could be virtual fencing where animals are kept on their designated pastures by GPS collars and a smartphone only. This livestock farming innovation is currently tested on cows in Lempäälä.

When a cow is grazing, it uses energy to move around. David Blažević, Postdoctoral Research Fellow at Tampere University, is aiming to harvest that energy to generate electricity. The solution would be both practical and environmentally friendly, since the cow could, for instance, recharge the battery of a tracking device mounted on its collar, which could then extend the battery’s lifespan.

“Once the power of kinetic energy harvesters increases and energy dissipation of electronic devices drops further, batteries could even become obsolete in many devices – the animal’s movement could be the only power source needed,” Blažević explains.

This novel source of energy would be invaluable for the environment as the production of batteries is harmful to nature, and used-up batteries cannot be recycled properly. There are also social sustainability issues involved in the battery production process.

Blažević notes that harvesting energy from movement has been studied on people quite a lot, but the devices have been deemed unfit to comfortable human use.

“Kinetic energy harvesting from the movement of animals has, in turn, received very little attention in research, even though animal movement could well power precision livestock farming,” Blažević says.

Precision livestock farming utilises smart farming technologies like collar-mounted devices that track animal welfare and movement. Such farming practice is becoming increasingly widespread, but as of now, the devices run on batteries.

Harvesting energy from animal movement has proved to work

Blažević has been researching energy harvesting from animal movement under a three-year Marie Curie funding which ended at the end of June. Before embarking on possible further projects, the research group still has a lot of results to wrap up and publish. They are also planning to carry out some additional tests.

Once the technology is applied in practice, one possible challenge could be the animal’s movement – or rather, lack of it.

“Cows, for example, can be very still when they’re trying to escape the heat of the sun. In these instances, kinetic energy harvesters naturally won’t be producing much electricity. The technology could in fact be most advantageous with more active species, such as reindeers,” explains Janne Ruuskanen, Postdoctoral Research Fellow in Blažević‘s research group.

Tampere University’s research group has been testing kinetic energy harvesting at a farm called Mantereen tila where a potential application of the technology – virtual fencing – is also being tried out.

Virtual fencing is an animal-friendly system where livestock is kept within a designated area by GPS collars and a digitally defined boundary line. If an animal crosses the boundary, the collar starts to play an audio warning that rises in pitch. When the whole scale has been played, the animal is given a mild electric pulse that teaches it to turn around during the warning sound.

“It was very motivating to see how quickly our test cow Meeri learned to abide by the audio warning. Not only did she stay inside the boundary, but she even acted against the herd instinct and stayed away from the other cows when they were outside the boundary,” says Philipp Mayer from Mantereen tila.

Thousands of cows in countries like Norway and the UK are already using virtual fencing, but this is the first time that the technology is tested in Finland. Mayer and Blažević are co-operating with Nofence, a Norwegian pioneer of the virtual fencing business, as the company is interested in utilising kinetic energy to power their GPS collars. Demand for virtual fencing has already exceeded the available stock of devices, so there will be a lot of competition for the market in the coming years.

In virtual fencing, the animals’ designated area can be defined flexibly on an app, meaning there is no need for fixed fences. This could be very useful in mountainous areas where fencing is a challenge and in countries where cattle grazes on vast lands. Still, the benefits are also substantial in Finnish conditions, which is what piqued Mayer’s interest.

“Traditional fencing is time-consuming and expensive, whereas the virtual system is economical and effortless. It also gives full control over the animals and provides information on their movement, which altogether allows me to manage the health of the pastures better,” Mayer says.

Mayer applies a method called holistic grazing in his farm, which increases the fertility and ecological diversity of soil. The aim is to ensure that precious microbes are preserved and that their numbers increase over time. This is achieved by avoiding any unnecessary soil disturbance, such as chemical fertilisers, excessive grazing and animal impact. It is also important to keep the soil covered with vegetation so that micro-organisms are fed and protected from the sun. Virtual fencing technology could play an important role in supporting the method.

“Virtual fencing allows me to move the cattle frequently and easily, and as a result, I can ensure that the plants produce an optimal amount of biomass per year. This means more feed for the animals and an increase in production, all while adhering to ecological principles,” Mayer explains.

The idea of powering the fencing system with animals’ own movements would suit this approach quite well.