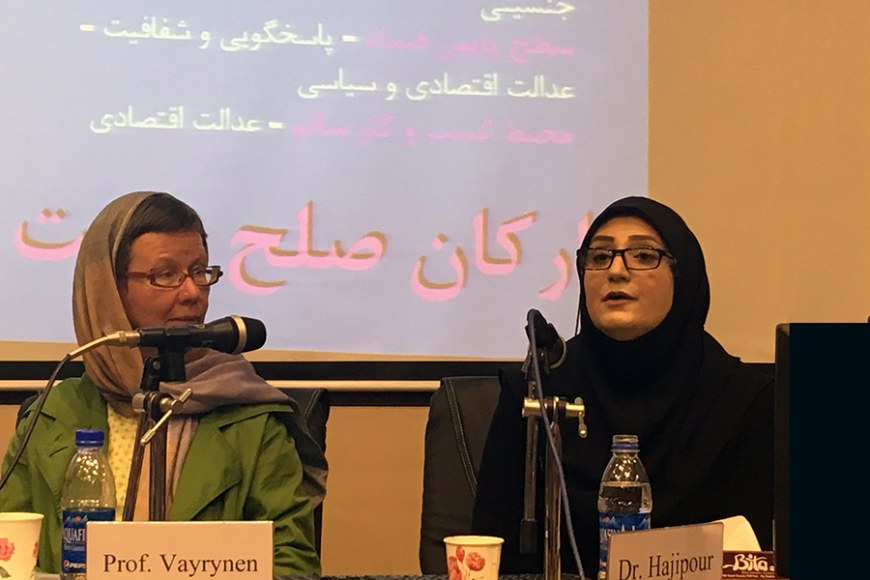 In the spring of 2018, Tarja Väyrynen participated in the Positive Peace seminar at Tehran’s Tarbat Modares University. As a result of the visit, Tampere University is about to conclude a staff and student mobility agreement with Iran. Photograph: Leena Wilkman
In the recent years, international conflicts have become increasingly violent. News on wars and violence conceals the positive developments that take place in the crisis hot spots of the world.

“There are many ongoing peace processes which remain invisible. There are official, so-called track-one, processes as well as smaller local peacebuilding initiatives that the media are not aware of or interested in. There are positive developments, but they do not get the publicity they deserve,” says Professor Tarja Väyrynen, Research Director of Tampere Peace Research Institute TAPRI at Tampere University.

TAPRI, which celebrates its 50th anniversary this year, examines positive peace processes. TAPRI first started as an independent institute that became part of Tampere University in 1994.

In half a century, TAPRI has become one of the leading peace research centres in the world that attracts researchers from all continents. TAPRI is the only institute in Finland to offer both a master’s and a doctoral programme in this field.

In 2017, the Peacekeeper ranked the Master’s Degree Programme in Peace, Mediation and Conflict Research (PEACE) among the top 10 programmes in conflict resolution and peacebuilding in the world. Peace issues are also part of the curricula of international relations, which is taught at the Faculty of Business and Management at Tampere University.

Peace processes in Burundi, Colombia and the Caucasus

TAPRI’s researchers have studied the role of non-governmental organisations in the world’s hot spots. One such spot is Burundi.

“Women’s organisations maintain everyday interaction on the local level even when peace processes have been stalled. For example, they educate young people in peace-related matters,” Väyrynen says.

The researchers have also investigated similar processes in Colombia where the local women’s organisations have played a prominent role in preparing the civil society for post-conflict reconstruction.

Another region where conflicts and local mediators have been studied is the Caucasus.

“Peace issues are culturally diverse. International organisations, such as the UN, can provide large frameworks for peace processes, but much is also happening at the local level,” Väyrynen explains.

Jyrki Käkönen, Marko Lehti, Tarja Väyrynen and Tuomo Melasuo have worked as Research Directors of TAPRI since it became part of Tampere University in 1994. Photographs: Erkki Karén and Jonne Renvall

Fatalities and violence are increasing

According to Väyrynen, the perception that violence is increasing in the world is not an illusion because the numbers of fatalities have grown in the recent years.

Global treaty-based politics is in a crisis because the United States has withdrawn from multilateral agreements and Russia is becoming more unpredictable.

Violent wars with multiple actors are fought, for example, in Syria, Yemen and Afghanistan. Are they hopeless cases?

“If we believe comprehensive peace agreements can be reached to end wars and deal with all the problems at once, perhaps there is no room for optimism,” Väyrynen says.

Instead, successful peace treaties and processes are often based on local agreements involving all the parties. Väyrynen trusts in parallel processes where the international, regional and local levels go hand in hand.

In today’s world, wars are even more complex. The Syrian and Yemeni wars are prime examples of the local, regional and superpower politics intertwining. The alliances keep changing and many parties are involved instead of just two states having a border or territorial conflict.

According to Väyrynen, it was in the 1990s that the traditional wars of a state against another state changed into multi-actor and multi-issue conflicts. Today, war-mongering coalitions and alliances may change from one moment to the next.

“The crises may be territorial, regional or spread to several countries. Such conflicts are in an ongoing internal turmoil, which is typical of this type of crises,” Väyrynen says.

What has changed or remained unchanged since the early years of TAPRI?

“The theme that continues is that we do not only study war and violence but also peace, mediation and conflict resolution as TAPRI’s name suggests. Research on peace processes and peacebuilding has always been one of the core areas of TAPRI’S research, but the topics have also changed,” Väyrynen mentions.

New research themes have emerged in the past seven years, one of which is gender and women’s roles in conflicts. TAPRI is also revitalising its research on environmental conflicts, which it already started in the 1990s.

“Our themes change with the times. We are not just studying the causes of war or reporting deaths. That is being done by others, such as the Swedish SIPRI,” Väyrynen points out.

In the spring of 2018, Väyrynen participated in an international seminar in Tehran, Iran, where a student and staff mobility agreement between Tampere University and Tarbiat Modares University was discussed.

After the visit, the political situation in Iran changed critically. The United States withdrew from the Iran nuclear deal. The relations between Iran and the United States became strained, and the tensions in Iran’s near abroad increased.

However, the exchange agreement between Tampere University and the Iranian university will still be realised on a smaller scale with Erasmus+ funding.

“Many EU countries have a policy that it is worth maintaining such ties with Iran. It is a way of communicating with a civil society that is different from ours. We are not trying to start a revolution. There is a well-educated section of the population, which thinks differently from the religious leaders. What we are doing is regarded as one way of supporting and showing solidarity for the progressive forces,” Väyrynen says.