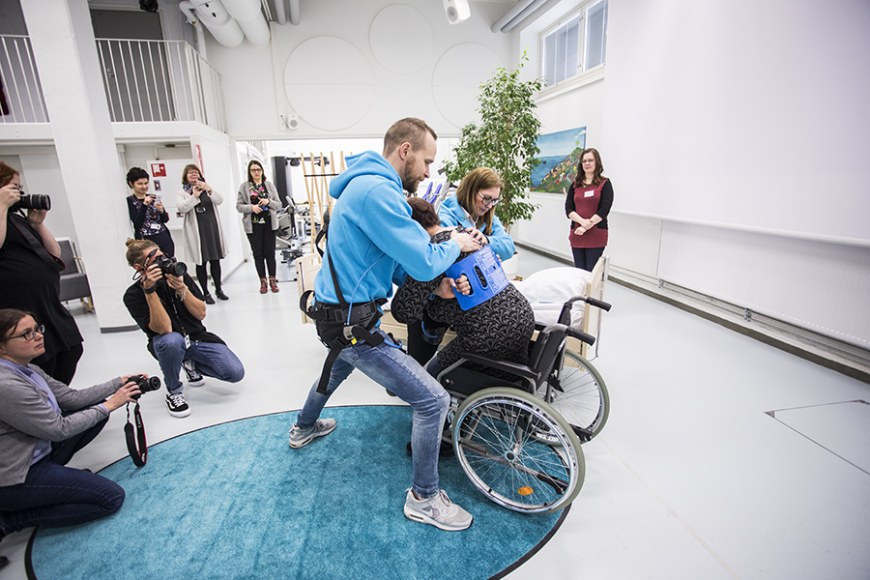 Sixteen care professionals participated in the experiment, half of whom were practical nursing students who did not have much work experience in the field. The other half consisted of students who had between 4 to 10 years of work experience and who are specialising in geriatric care.

The amount of work experience was among the aspects that separated the groups of respondents.

“Participants with more work experience were less enthusiastic about using the exoskeleton vest. We should naturally appreciate experience, but the question may also be of what people are used to,” says Doctoral Researcher Tuuli Turja organiser of the experiment.

Opinions on the exoskeleton vest divided

“In the follow-up study, we intend to see how the vest works when just one person moves the patient,” Turja says.

The people involved in the experiment said that the exoskeleton vest might also prove useful in other work tasks, such as lifting heavy loads.

However, different people had different experiences.

Some respondents paid attention to the effects of using the exoskeleton vest on the working atmosphere and the social norms around robotising care work.

“Some people wondered what their colleagues would think about the device. For example, could using the vest frustrate colleagues because of the time it takes to put it on and take it off,” Turja says.

“The manufacturer told us that using the vest with eg aggressive patients who do not respond to instructions would be impossible because they might suddenly grab the device,” Turja notes.

An experienced user can put on the exoskeleton vest in less than a minute. After lifting, the hip support mechanism must be unlocked to enable walking, but opening and locking the supports is easy. The same exoskeleton vest is also suitable for people of different sizes.

“A few centimetres’ difference in height does not affect the adjustments of the device. If the difference between the users’ height is greater, a sizing part must be switched in the device, but this does not take long,” Turja explains.

The exoskeleton vest experiment was implemented because in a survey of members of nurses’ unions (n = 3800), the care workers said that the current aids used to move patients were awkward to use. They looked to robots and other new technology for help in physically demanding tasks.  Technologies that assist the work of nursing staff were also considered more desirable than autonomous systems that would not require nurses’ involvement.

The research group will organise a more controlled experiment of exoskeleton use in 2020.

For a exoskeleton vest to be practical in nursing, it must be easy to wear and light enough. Reliability is also important.

“The device utilises gas spring technology, so no electricity is involved. The passive exoskeleton vest chosen for this experiment weighs 2.3 kilos, so its weight is not a huge issue in normal work,” Turja notes.

The users gave good feedback on the suppleness and structure of the device. However, many respondents found the thigh pads too hard material-wise.

“The exoskeleton vest fits better on the top of the clothes. If worn under clothing, it is perhaps not as comfortable but of course, it can also be worn that way,” Turja says. The nursing students sent their regards to technology developers and hoped for a device that would fit effortlessly under their work jacket.

In spite of the positive experiences, the technology still needs to be developed. People who participated in the experiment hoped that the device would provide more strength. However, this would mean an active exoskeleton with a bulkier exterior (>8 kg). More softness was also desired.

According to the manufacturer, the device reduces pressure to the lower back by about 40-50%. The exoskeleton vest costs €3,000.

There is no exoskeleton vest technology in Finland

The Laevo Exoskeleton power vest used in the experiment is manufactured in the Netherlands. Similar devices are not made in Finland.

“Corresponding devices are used in Japan and the United States, but for some reason, those products are not sold in Europe. I found it a bit problematic that we did not find appropriate technology for this experiment in Finland because we would have liked to highlight Finnish expertise. This is a good challenge for technology experts because there will be much demand for such devices in the near future,” Turja says.