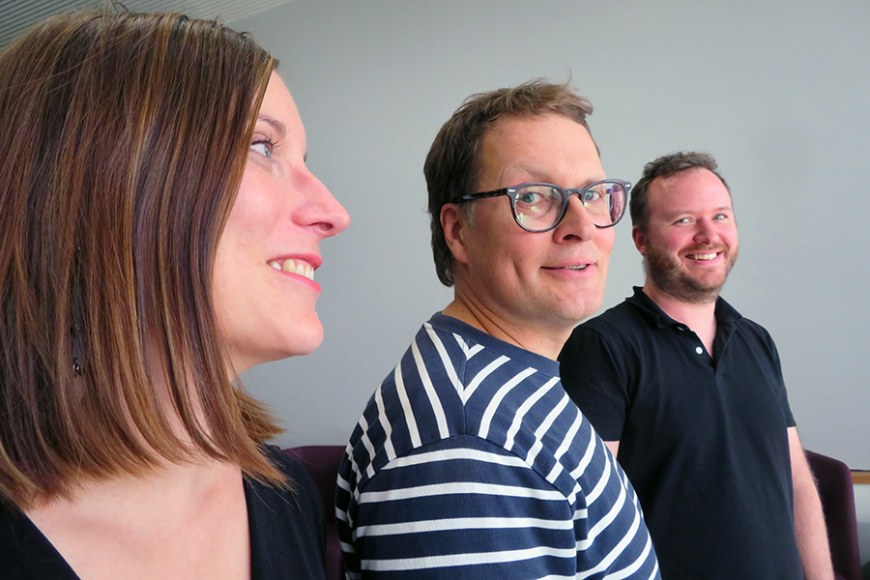 “The coronavirus has made room for sustainable development in a broad sense. Based on discussions on social media, it seems that the current situation makes many people aware of such things,” says Salla Jokela, university lecturer in sustainable urban development.

Jokela, Markus Laine and Jonathon Taylor are the lecturers and programme leads for the new Bachelor’s Degree Programme in Sustainable Urban Development, which Tampere University had to start mostly virtually because of the restrictions caused by COVID-19.

Nineteen students from across the world representing at least eight nationalities are studying in the programme. There are students from Vietnam, Kazakhstan, South Africa, Bangladesh, Latvia, and Spain, but only the students from Finland were able to participate in the kick-off meeting in person.

“We all agree that it would have been delightful to have all the students here at the beginning of the semester. For students, this has not been nice because they have missed out on all the exciting student activities,” Markus Laine says.

Canadian-born Jonathon Taylor finds it positive that there has been enough time to prepare the teaching and that it has been possible to adapt the teaching materials to the situation caused by the pandemic. Taylor came to Tampere to prepare the programme in early March, and a week later the university closed due to the coronavirus. Previously, Taylor worked at University College London in the UK but teleworked from Helsinki.

“Integration into the group is now a little different and challenging. We try to do it via Zoom,” Jokela says.

The Bachelor’s programme also includes practical exercises in the Hiedanranta area of Tampere. Fortunately, those studies will take place next year when all the students can come to Tampere.

The Bachelor’s Degree Programme in Sustainable Urban Development is the joint effort of the Faculties of Management and Business, Social Sciences and Built Environment.

The idea of sustainable development is becoming mainstream

The establishment of the Bachelor’s Degree Programme in Sustainable Urban Development shows that ecological thinking is becoming mainstream even though there is still a long way to go.

Laine remembers participating in the student union’s bicycle demonstration in Tampere in the early 1990s when the route ran along the car lanes of the Hämeenkatu street. At that time, Tampere’s main street was reserved for cars and there were no bicycle lanes. In 2020, there is a tram line, good bicycle lanes, and no cars.

Taylor says that he is not very familiar with the situation in Finland but that his experiences correspond to Laine’s in that the awareness of sustainable development was much smaller in the 1990s.

“We are still a long way from the goal but going in the right direction. Now, we can only accelerate development so that people would really start to understand what kind of radical change is needed,” Taylor says.

COVID-19 reveals the need for change

Many of the problems brought by the coronavirus are related to sustainable development. Taylor says that the virus tells the story of the forces of nature that are showing people we need to change our lifestyle drastically.

According to Jokela, COVID-19 has also empowered people to understand that we can change things together.

“In the middle of crises, people come together and understand that they have a common goal. That is the silver lining,” Jokela says.

However, the government’s financial stimulus programmes reveal a drive back to the old economy of continued growth. Business subsidies for airlines such as Finnair do not indicate that the country’s leadership wants a change that is based on the terms of sustainable development.

Taylor considers Finnair’s support decision to be a very difficult political issue because of jobs. In France, Air France received a subsidy on the condition that it will reduce domestic flight capacity by 40%. This means that the company intends to stop all flights where the journey can be made by train within 2.5 hours. According to Taylor, such conditions should be imposed on all corresponding COVID-19 subsidies.

Jokela says that tourism in Finnish Lapland has also had a strong incentive to invest in sustainable development now that the coronavirus has shown that operations are vulnerable when they are based on the terms of air traffic.

“Some people say that we should get back to normal after the epidemic, but there are also strong observations of a new normal. I want to work with the younger generation because they are highly motivated to make a difference,” Jokela says.

Markus Laine welcomes the EU’s €750 billion stimulus package for sustainable development. The idea was good, even though it was watered down in the negotiations.

The plan to close UPM’s Kaipola newsprint mill has sparked heated debate and concern about the position of employees. In this case, Laine sees a feature that tells about the wrong choices made by the Finnish forest industry, for which it now pays the price in the form of plant closures. Companies did not invest in new technologies in time, although a decline in paper consumption was a long time coming.

“Companies should be aware of developments and the next steps in technology and not hang on to old ideas. The Finnish forest industry can also use wood in a more environmentally friendly manner and utilise it in a way that preserves the carbon sinks,” Laine says.

In the Bachelor’s programme, new technology applications are being tested at the field work site of Hiedanranta, from which significant replacements of old technology can also emerge in the field of wood processing.

Ecology of urbanisation depends on quality

Urbanisation is a global mega trend. Future challenges such as climate change will be solved in cities because up to two thirds of the world population is projected to live in cities by 2050.

“At present, urbanisation may be a bad thing for sustainability, but it can also be handled in a sustainable way. Copenhagen is getting pretty close to that,” Taylor says.

Laine confirms that Copenhagen has an ambitious strategy to curb carbon emissions and that its urban transport is organised in a rather sustainable way. In Finland, the Tampere tramway project is a good example and a big investment in sustainability.

Taylor praises the Tampere tramway for favouring diversity by putting grass between the tracks instead of just stone and concrete.

The prospects of sustainable urban development will be discussed in the Leadership Symposium organised at Tampere University on 9 September in a panel chaired by Markus Laine with Henna Helander from the Finnish Association of Architects, Jonathon Taylor from Tampere University, Katariina Haigh from Asuntosäätiö and Toni Tuomola from Skanska. The language of the panel is English.

Laine says that the panel is not only a bunch of like-minded people smiling together, but to expect a lively dialogue on urbanisation and housing issues.