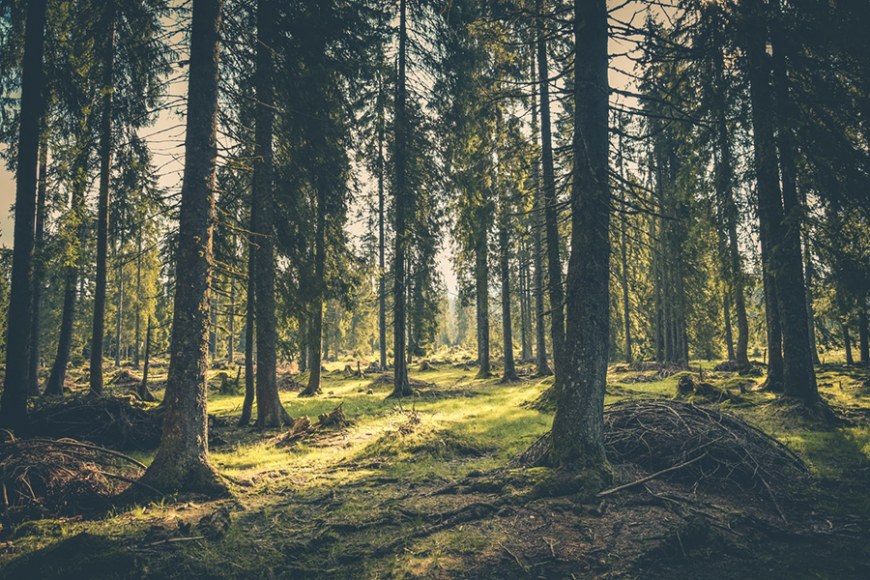 Emissions of greenhouse gases have a warming effect on the climate, whereas small airborne particles in the atmosphere, aerosols, act as a cooling mechanism. A new study shows that the tiniest aerosols are increasing at the expense of the normal sized and slightly larger ones – and only the latter have a cooling effect. The study may help reduce uncertainties related to the effect of aerosols on the clouds and climate.

The air is full of small airborne particles – aerosols. Some are naturally produced, while others are caused by the combustion of fuel by people. Some are harmful to our health, while others reflect sunlight.

One of the important natural sources of aerosols is the fragrant terpenes from coniferous forests. For example, the boreal coniferous forest area “the taiga” that stretches like a ribbon across the whole world, accounts for 14 per cent of the world’s vegetation coverage, and is thus the world’s largest coherent land ecosystem.

Through chemical reactions with the ozone in the atmosphere, the terpenes transform into highly oxygenated organic molecules, which stick onto aerosol particles that are already in the air. This leads to more cloud droplets, as each cloud droplet is formed through steam condensing on the surface of a sufficiently large aerosol particle. More cloud droplets lead to denser clouds and reduced insolation.

A new model reveals the process how aerosols are created

However, the new study published in the Nature Communications journal shows that this “coniferous forest effect” has diminished due to industrialisation.

Emissions of ammonia from agriculture and sulphur dioxide from fossil fuels change the rules of the game: the oxidation products of terpenes and other organic molecules are instead divided into many more, but smaller, aerosol particles. As the diameter of very tiny aerosols is smaller than the wavelength of light, the particles are unable to reflect light.

Although sulphur dioxide and ammonia are gases, they generate new particles via chemical reactions in the atmosphere.

“Paradoxically, a larger number of aerosol particles can lead to the reduction or even elimination of the cooling effect of the organic molecules that are released from the forests,” says Pontus Roldin, researcher in nuclear physics at Lund University and first author of the article.

The international research team developed a model that for the first time reveals the process behind the new particle formation of these aerosols.

“It is commonly assumed that the highly oxygenated organic molecules (HOM) have a cooling effect on the climate. However, things are not as simple as they might seem at first, and thus the influence of these HOM in the future also depends on the amount of other available gaseous molecules, especially sulphur dioxide and ammonia. With human influence and these gases, the effect can be contrary to what might be thought at first,” says Professor (tenure track) Matti Rissanen from Tampere University.

There has already been a considerable reduction of sulphur dioxide emissions in Europe and USA since the 1980s and steps in the right direction have now also been noted in China.

“Relatively simple technical solutions are required to reduce sulphur dioxide; for example, cleaning of exhaust gases from ships and coal-fired power plants etc. It’s much harder to reduce ammonia, as it’s released directly from animals and when soil is fertilised”, says Pontus Roldin.

It is estimated that in the future, global meat production will rise considerably as prosperity in poor countries, mainly in Asia, increases. Today, it is not known what the consequences of these changes will be, but to make an estimate requires the use of detailed models like the one that has now been developed.

Fractions of seconds instead of weeks

In the next few years, researchers at Tampere University will study further, how different emission sources interact on the molecular level. In order to produce the tiniest particles, strong interactions are necessary. It has only recently become possible to study them with theoretical and experimental methods.

“The natural volatile compounds from vegetation mix with manmade pollutant emissions and lead to the growth of particles, which is what we investigated in this study. Molecular-scale interactions are still poorly known,” Rissanen explains.

The interactions are being explored through meticulous laboratory measurements and theoretical models at Tampere University and partner universities.

“We have recently discovered the extreme significance of highly oxidised organic compounds for the generation and growth of atmospheric particles, especially in the critical tiny sizes. These almost non-volatile, oxygen-rich compounds form very rapidly, even in fractions of a second, while it was thought for a very long time that the formation of such molecules in the atmosphere takes days or even weeks,” Rissanen says.

“As part of this study, we developed a new extensive reaction mechanism to describe the rapid formation of these important molecules from organic, plant-derived terpenes. The mechanism was used to understand the formation and growth of fine particles in the boreal forest. The new mechanism and atmospheric observations are mutually supportive,” Rissanen explains.

Read the article: The role of highly oxygenated organic molecules in the Boreal aerosol-cloud-climate system