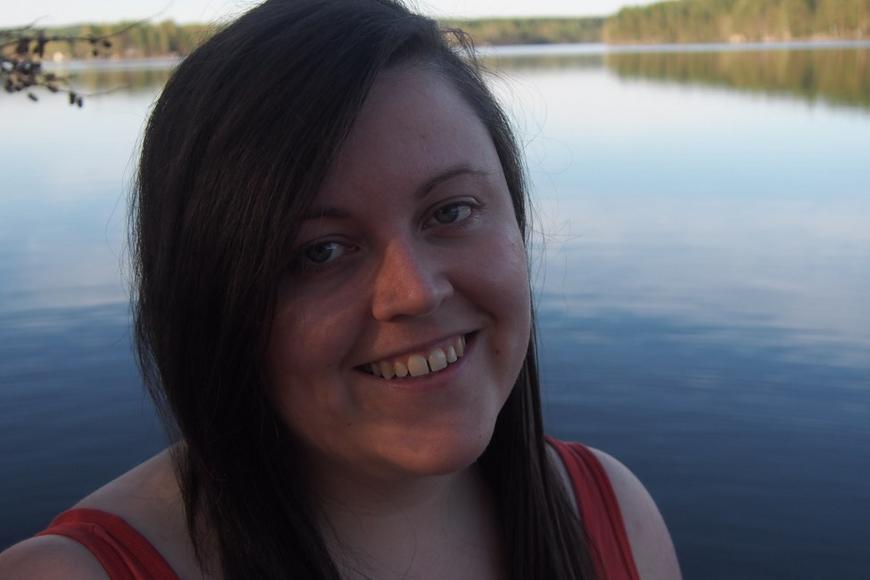 Lauren Stevens comes from United Kingdom. She graduated from the PEACE programme in summer 2019.

How long have you been in Tampere and what brought you here originally?

Six years ago, I met some people who became a really important part of my life. They were Finnish Erasmus exchange students whilst I was in my first year of my Bachelor’s degree programme in International Development Studies with Spanish language at the University of Chester. They both became my best friends and one of them is now my partner. They provided me with the opportunity to travel to Finland. By experiencing the lifestyle and culture of the country through the perspective of a native, I learnt a huge amount about a country that I couldn't have pointed out on a map six years ago. My partner originally planned to eventually move to Britain to be with me after I graduated from my Bachelor’s degree. I started applying for internships and graduate jobs in Britain, but I didn’t have any luck. I didn’t consider a postgraduate course in Britain because of the cost and I didn’t want a bigger loan. My partner suggested that I study in Finland because there are no tuition fees.

What subject do you study and how did you choose it?

I study the Master's degree programme in Peace, Mediation and Conflict Research. I originally started studying the Global and Transnational Studies programme, but didn't feel that it suited me as well as I'd imagined due to its sociological and theoretical basis. Therefore, as soon as I possibly could (I had to reapply), I changed to the Peace, Mediation, and Conflict Research programme. The programme is practical; offers me another perspective of global issues that complements my Bachelor’s degree; and relates to my interest in history, as well as my career aspirations. I’m currently working as an Information Intern at the Åland Islands Peace Institute. After graduation, I would like to work in diplomacy and/or humanitarian action, for example for the European Union (EU), the United Nations (UN), or a non-governmental organisation (NGO) such as the Red Cross.

What do you most like about Tampere and Finland?

I fell in love with Tampere and Finland because they have uncrowded places and nature close by, environmentally friendly attitudes, cycling infrastructure, many vegan products, internationally recognised welfare and education systems, really low levels of corruption, an interesting history, and a significant contribution to peacekeeping.

What about your hobbies in Tampere or in Finland?

I have had lots of opportunities to integrate, network, attend events, and even expand my knowledge outside of my field through volunteering in various initiatives. For example, I have volunteered for Demola (an international organisation that facilitates co-creation projects between university students and companies, either locally or internationally), and as an International Tutor (volunteering to help international students coming to Tampere to integrate themselves into the local study environment and student life and adapt to the day-to-day routines). I’ve participated in the local student union‘s student associations (the United Nations Association of Tampere), committees (the Committee for Environmental Affairs and the Committee for Development Cooperation), and projects (the Development Cooperation Project Planning Group for the new sanitation awareness project in Dar es Salaam (Tanzania)).

Being a Student Ambassador, Business Tampere Ambassador, and Nordic Talent Ambassador have been especially beneficial for me. I’ve also volunteered with organisations related to my education and career aspirations: the United Nations Women local committee of Tampere Vice Chairman and TIPSY (Tampere Peace Students). I didn’t come across so many exciting opportunities whilst studying in Britain!

What would you say to someone deciding whether Tampere is the right place to come to study and live?

I continued my education outside of Britain due to the cost. Here in Finland, I do not have to pay tuition fees, and even my healthcare and meals are subsidised. I’ve also received much better treatment and support for my personal growth here compared to my previous university in Britain, despite being in a large amount of debt due to the tuitions fees for my British Bachelor's degree, and not needing to pay any tuition fees for my Master’s degree here because I’m a citizen of an EU country. Through volunteering as a School Visitor for Erasmus in Schools, I have had the opportunity to visit Finnish primary, secondary, and sixth form schools.

I observed that the schools offered free meals for every student, and there are more breaks and less homework; yet Finland is usually one of the most successful countries in the world in terms of education. I genuinely believe that this is because Finland values the importance of free-time, leisure, exercise, relaxation, and nature. Britain could consider these aspects in order to improve its education system, as I considered studying in Britain much more stressful. For example, in Finland, the lecturers are much more flexible with deadlines due to illness or other problems.

Before I moved to Finland, I was hoping to participate in a Finnish language course, but I thought I would have to pay for evening classes. However, I discovered that international students are able to participate in the Finnish language courses offered by UTA for no extra cost and incorporate the credits we gain from them into our studies. Moreover, in Finland, many students go a study exchange to another country. In my experience in Britain, it is mostly only language students who go on a study exchange, and there are not that many language students. I was surprised at the internationality evident at the university in Tampere when I first arrived, as well as the support and facilities provided for international students.

I think studying here is a fantastic opportunity because I am meeting people of nationalities that I have never encountered before, which is changing many of the ideas and prejudices that I previously had about them.  I would advise other Brits to consider postgraduate studies abroad, including countries in which they dont speak the language, especially in the Nordic countries. I didn’t do any Finnish courses until I moved here. Unfortunately, things might become more complicated because of Brexit. Finland has recently introduced tuition fees for non-EU students, which may affect British students in the future.

Foreign students can often be discouraged from applying to study in Tampere. This is because many believe that it can be difficult to find a part-time job to support themselves. Several months into my studies when I felt I was settled into Tampere and had time, I started searching for a part-time job. I searched for jobs related to my previous experience in kitchens and teaching English, so I applied to restaurants, hotels, and private English schools. I was also willing to gain new experience working in a position that I hadn’t before, such as bar staff or a cleaner. Eventually, after six months, I had my first interview. It was for a restaurant called Fafa’s that opened in February, and I got the job! Fafa’s was originally established by an Israeli who struggled to find work in Finland and alternatively opened restaurants serving cuisine from Israel.

In Fafa’s, Finnish language and restaurant experience are not necessary, and the restaurant has employed many foreigners, although it is possible to try to practice Finnish whilst taking orders. The atmosphere was interesting with a mixture of Finns and foreigners. It kept me pretty busy, but it was manageable, and I worked there for 2 years.

Although the job market is not as open to foreigners as it is to Finns, it is improving due to initiatives such as the Tampere All Bright Ambassador network, which I am part of. The network aims to gather together internationally and business-oriented people from the Tampere region and is open for all people regardless of their nationality or professional background. This network is useful for finding new contacts and work opportunities. I have international student friends who have been employed as newspaper deliverers, cleaners in a department store and a hotel, and a street fundraiser, among others. Whilst it can sometimes feel difficult to find a job because many jobs require fluent Finnish, there are exceptions, like in my case. If you are perseverant and innovative I believe it is possible to find something, or even establish your own business, because opportunities for foreigners are improving.