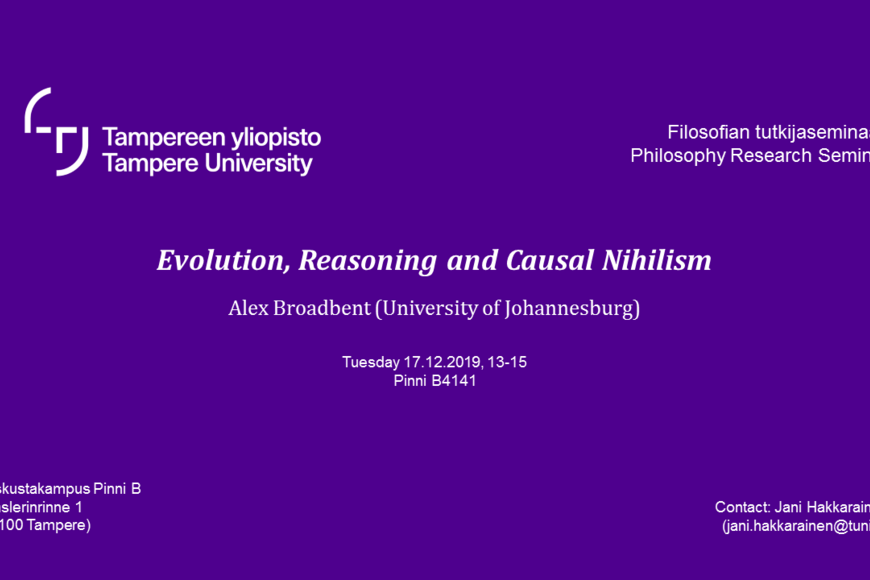 Please note the unusual date and time of the seminar: on Tuesday 17.12. 1pm-3pm.

Causal reasoning is widely thought to be a cognitive trait that is distinguishing feature of humanity, accountable for our success at spreading through the world and shaping it. In this paper I argue that there is neither empirical nor conceptual evidence to support any part of this vague claim. There is no conceptual analysis of causation that clearly defines it, and no empirical evidence to support the claim that causal reasoning enables categorically different abilities to manipulate the world than reasoning derived from learning associations. Philosophers and palaeoanthropolists rely on each other for their assumptions, unaware of being caught in a vicious circle. I propose a model of associational reasoning which would explain the greater, but not categorically different, capacity of humans to manipulate the world. I argue that there is no reason for anyone to suppose that there is a "thing" answering to the term causation, nor component notions such as necessity or counterfactual dependence. Necessity, in particular, is a theoretical notion that has been wrongly projected into the causal reasoning process. Counterfactual reasoning is an even more recent theoretical construct, wrongly projected into the cognitive process of mentally simulating possible outcomes based on learned associations. Such theoretical constructs are useful and in a sense constitute a cultural evolution of our causal reasoning capacities, but they must not be confused with the underlying cognitive faculty.