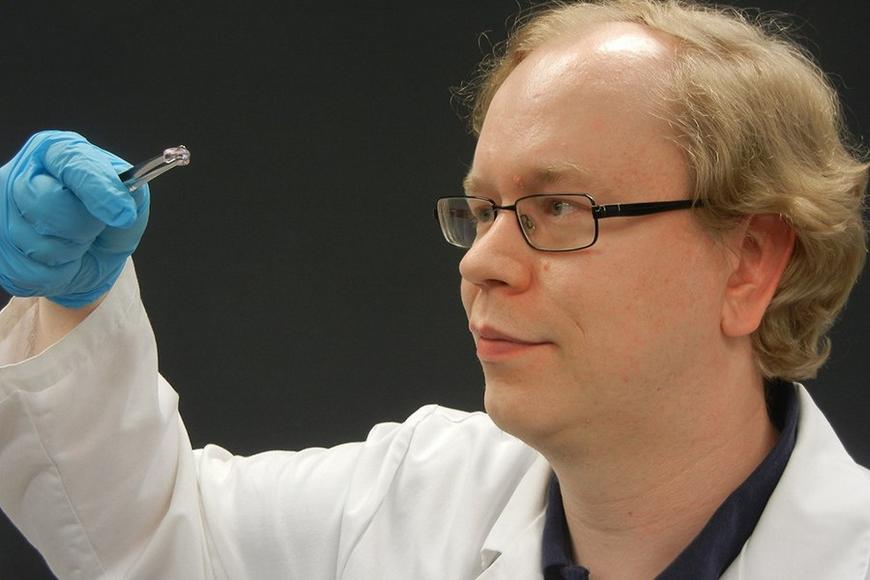 Tissue engineering aims to produce living tissue by combining stem cell derived tissue specific cell with three-dimensional (3D) scaffold materials, for example hydrogels. By culturing vital cells originating from the soft tissue, such as neurons and cardiomyocytes, disease models can be created and cures for untreatable diseases can be found. Janne Koivisto (M.Sc.(Tech.)) developed in his doctoral thesis both gellan gum -based hydrogel biomaterials as well as characterization methods for hydrogels and 3D cell cultures, aiming for better biomimicking in soft tissue engineering.

A hydrogel is a crosslinked polymer network with high amount of water bound into the system. In the fields of biomedical engineering and biomaterial science, hydrogels have lately received much attention because of their similar properties with living tissue. Both many tissues as well as hydrogels are soft, elastic and provide cells 3D support structure to attach to.

From the various hydrogel materials, Koivisto chose gellan gum for this study. It is a bacterial-produced natural molecule, which was originally developed as a food additive. Gelation of these hydrogels was studied both as physical as well as chemical crosslinking. In addition, the cell response was enhanced by addition of derivatives of extracellular matrix proteins.

Human pluripotent stem cell derived neuronal cells and cardiomyocytes were differentiated via methods previously developed in the Tampere University. Both cell types were able to grow in the tailored, 3D hydrogel cell cultures. Neuronal cells produced their characteristic neural networks and cardiomyocytes were spontaneously beating, as expected if the cells favor their environment.

”The most exciting part was seeing the excellent cell spreading and growth in the gelatin functionalized gellan gum. In this hydrogel, the cell response is equivalent, if not even better, than in the competing 3D systems published around the world.” Janne Koivisto explains.

As the hydrogel research and three dimensional cell cultures are a fast developing field of science without many established practices, the study also included development of methods to study the produced tissue engineering samples. As one of the most important methods, development  of optical projection tomography (OPT) was continued and shown to function well for both purely material characterization of hydrogels as well as for imaging three dimensional cell cultures. As a second important development focus were the methods of hydrogel mechanical testing and analysis utilizing several methods.

Janne Koivisto hails from Tampere, but has moved from Tampere University to University of Oulu slightly before finishing the dissertation, to work as a researcher there in the Microelectronics Research Unit.

The doctoral dissertation of Janne Koivisto, M.Sc.(Tech.), in the field of biomaterials titled Development and Characterization of Gellan Gum Based Hydrogels for Soft Tissue Engineering will be publicly examined in the Faculty of Medicine and Health Technology at 12 o’ clock noon on Friday, 15th of November 2019 in auditorium TB103 in Tietotalo, Hervanta campus (Korkeakoulunkatu 1, Tampere). The opponent will be Senior Research Fellow, Principal Investigator Eileen Gentleman, PhD, King’s College, London. The custos will be Professor Minna Kellomäki from the BioMediTech unit at Faculty of Medicine and Health Technology, Tampere University.