When I first learned about Stardew Valley, I assumed it was a simple game, a farming simulator. Playing it showed me that there’s a lot more than meets the eye. Sure, the main point of the game is that the player has a farm where the goal is to plant seeds and trees, have farm animals and to take care of them. But there’s also the town and its story, the people of it and their personalities and the player’s relationship with them.

The so-called antagonist of the plot is a company that is trying to take over the small town of Pelican by monopolizing and offering cheaper prizes than the local stores. The player can choose whether to buy the Joja Mart’s cheaper products and buy a membership to the mart so that the town’s community center will be turned into the Mart’s warehouse. Or to support the local businesses and rebuild the community center by collecting different items such as fish, fruit and things that can be found while mining. Every now and then, there will be a cutscene with some of the characters where you can’t interact other than answering to questions, if the scene allows it. I was surprised to see how deep and sometimes even dark those scenes could get, and it confirmed it even more to me: Stardew Valley is not just a silly little farming simulator.

At first, the player can’t enter the character’s rooms in their houses – the bond with the player and the character needs to be closer to do that. Becoming friends with the character is simple: by talking to them and giving them gifts, whether it is something you have grown on your farm or something you have found while wandering through the town, such as berries or fish you have caught. And a good way to form good relationships if a person playing wouldn’t want to spend time talking to the characters is to give them a gift on their birthday. Once the friendship is formed, they start giving gifts as an exchange as well!

At some point the player is given the opportunity to show their romantic interest towards a character but if the friendship is not at least at the level of eight hearts, the character is just confused by this gesture. The character might also be showing some romantic interest on their own, so that’s also a good time to show it back by giving them a bouquet. When it comes to marrying the character, just a different item to give to them is needed. After that, the character moves to the farm and can even help with the different tasks in the farm – like feeding the animals or watering the crops. Since each day starts at 6 a.m. and ends at 2 a.m. and the hours go by fast, even the smallest ways of gaining more time to explore is welcome. The fact that the days are very short and that the player can’t run are the most frustrating to me. There is the option of buying coffee, which gives the player speed. But spending all the money on coffee when there are so many things that you need money for – like tickets to visit different areas, expanding your house and so on – doesn’t seem to be worth it to get by faster. Another way is to buy a horse, but unfortunately the horse can’t fit through all the places and each time you want to pick something up from the ground, you must dismount and mount again, which is a small trouble to go through, but somewhat frustrating, nevertheless. And of course, there is the option of planting coffee seeds and making coffee from them, but for that, five beans is needed, and the keg takes its own sweet time until you can get your hands on just one cup of coffee.

All in all, Stardew Valley is a very addicting game. There is something for anyone – you can fish, you can take care of farm animals, you can plant things, decorate your house and farm, combat the creatures in the mines or get to know the town’s people and even get married to one of them and have children. It’s a game that completely wraps you into its own little world. Unfortunately, after you have spent more than a few years on your farm, it can get boring and trying to gather all the pieces for the community center can also feel frustrating at times. Then again, there are areas that the player can unlock, so that’s a pretty good way to get lured into the world of Stardew Valley again. 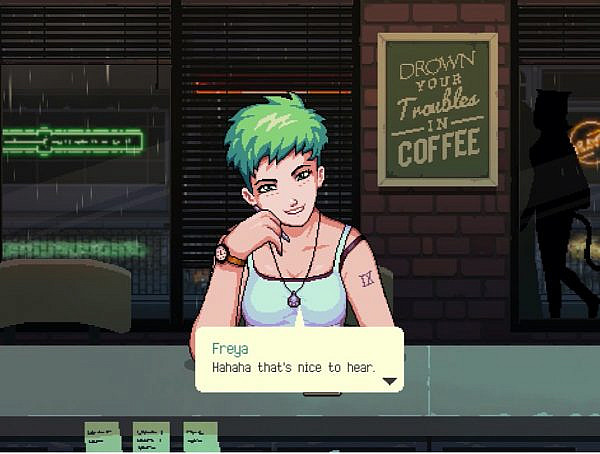 409
Game Reviews
Coffee Talk – A visual novel where elves, mermaids and orcs espresso their deepest thoughts to you, their barista