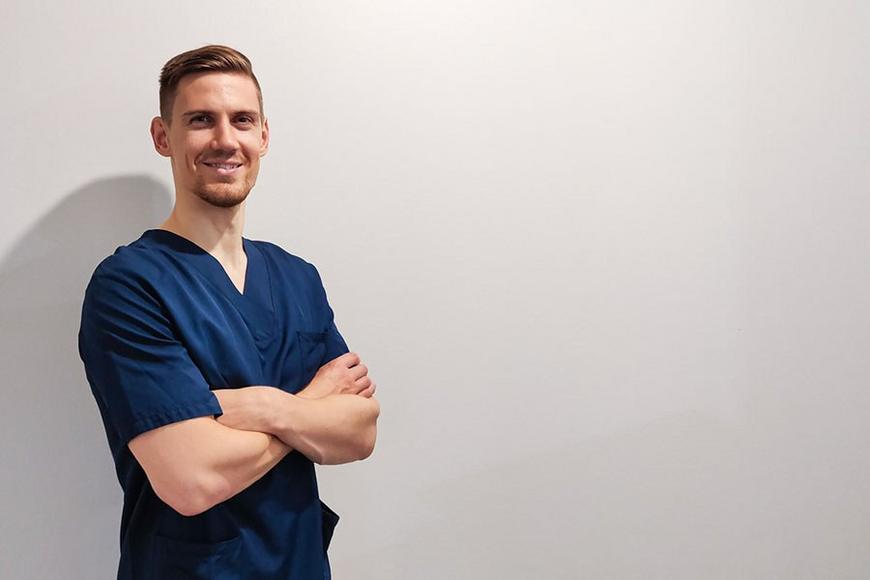 M.D. Ville Ponkilainen studies in his doctoral dissertation the incidence, diagnostic accuracy, and outcomes after non-operative treatment and the validity of the most commonly used outcome measure for midfoot injuries.

The materials of the study were collected retrospectively from the patient records at Tampere University Hospital during a five-year period from 1.1.2012 to 31.12.2016. All computed tomography (CT) images taken due to an acute foot and ankle injury during this period were assessed and all patients with midfoot injuries were included. The data were used to investigate the incidence, trauma mechanisms, diagnostic accuracy, and the validity of an outcome measure and outcomes after nonoperative treatment.

The primary findings of the study were that Lisfranc injuries are more frequent injuries than previously thought with an incidence of 9.2/100 000 person-years. However, Chopart injuries are more infrequent with an annual incidence of 2.2/100 000 person-years in our study population. The majority of Chopart (86%) and Lisfranc (55%) injuries were caused by low-energy trauma. Most (56%) of the Lisfranc-Chopart combination injuries occurred in high- energy traffic accidents.

The conventional radiograph-based diagnosis of a Lisfranc injury has moderate agreement between observers (κ = 0.50 (95% CI: 0.45 – 0.55) (first evaluation) and κ =0.58 (95% CI: 0.52 – 0.63) (second evaluation) and substantial agreement between the same observer at different moments (κ = 0.71, from 0.64 to 0.85). Even experienced clinicians seem to lack a high consensus on standard radiograph findings of Lisfranc injuries. The sensitivity of radiographs was 76% and specificity 85% for detecting Lisfranc injuries. Therefore, a substantial number (24%) of injuries are missed when only conventional radiographs are used in the diagnostics. As presumed, subtle, nondisplaced injuries were more commonly missed than displaced injuries.

The American Orthopaedic Foot & Ankle Society Midfoot Scale is the most commonly used outcome measure among studies investigating foot and ankle surgery. Its validity, however, has been questioned. According to the findings of this study, the internal consistency and convergent validity of the scale are acceptable, yet the coverage and targeting of the scale has raised some concerns because it does not discriminate patients with relatively few symptoms well. The scale has too many ‘easy’ items, and therefore it is too easy to score the maximum points.

Our study supports the view that nondisplaced injuries, regardless of the number of affected columns or the type of the injury (avulsion or simple intra- articular fracture) of the Lisfranc joint, can be treated non-operatively with 4 to 6 weeks non-weightbearing cast with good clinical outcome. It may be the case that some types of nondisplaced Lisfranc injuries would benefit from surgical intervention. However, the criteria for identifying these injuries remain unknown. Moreover, our ongoing randomized trial will yield important information on the treatment of these injuries in the future.

In conclusion, this study has shown that Lisfranc injuries are more common than previously thought. If the radiological diagnostics are based only on standard radiographs, a considerable number of injuries may be missed. We suggest therefore that a computed tomography (CT) scan of the injured foot is performed when there is high clinical suspicion of a midfoot injury (pain in active and passive movements, swelling, or plantar ecchymosis). Non-operative treatment certainly has role to play in the treatment of Lisfranc injuries, but the clinical and radiological criteria for injuries that can be successfully treated without surgery are still unknown. In addition, due to flaws in the American Orthopaedic Foot & Ankle Society Midfoot Scale and other problems reported in the previously published literature, the scale is not recommended as a primary outcome measure for the evaluation of outcomes after Lisfranc injury. Thus, outcomes after Lisfranc injury should be evaluated using other properly validated outcome measures.

Finally, the current literature on these injuries is limited, and further high- quality studies are urgently needed. In the near future, our prospective randomized controlled trial will yield important knowledge for the treatment of these injuries. Additionally, it is important to find reliable diagnostic tools that can identify those injuries that require surgical treatment.

The doctoral dissertation of M.D. Ville Ponkilainen in the field of Orthopaedics and Traumatology titled Incidence, Diagnostics and Treatment of Midfoot Injuries will be publicly examined in the Faculty of edicine and Health Techonolgy at Tampere University on Friday 23 October 2020 starting at 12 o'clock in Finn-Medi 5 building auditorium, Biokatu 6. The Opponent will be Professor Heikki Kröger from University of Eastern Finland. The Custos will be  Professor Ville Mattila.